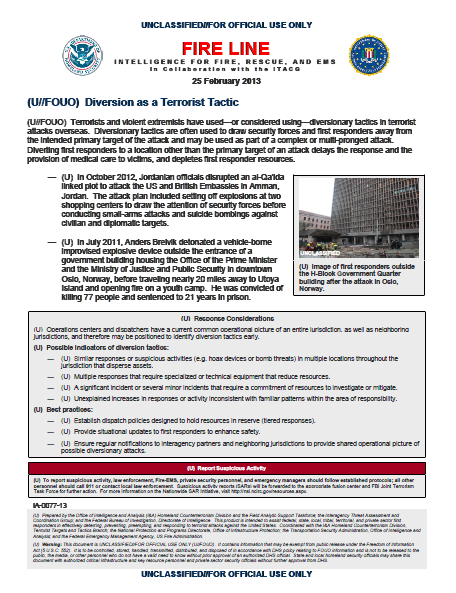 (U//FOUO) Terrorists and violent extremists have used—or considered using—diversionary tactics in terrorist attacks overseas. Diversionary tactics are often used to draw security forces and first responders away from the intended primary target of the attack and may be used as part of a complex or multi-pronged attack. Diverting first responders to a location other than the primary target of an attack delays the response and the provision of medical care to victims, and depletes first responder resources.

— (U) In October 2012, Jordanian officials disrupted an al-Qa‘ida linked plot to attack the US and British Embassies in Amman, Jordan. The attack plan included setting off explosions at two shopping centers to draw the attention of security forces before conducting small-arms attacks and suicide bombings against civilian and diplomatic targets.

— (U) In July 2011, Anders Breivik detonated a vehicle-borne improvised explosive device outside the entrance of a government building housing the Office of the Prime Minister and the Ministry of Justice and Public Security in downtown Oslo, Norway, before traveling nearly 20 miles away to Utoya Island and opening fire on a youth camp. He was convicted of killing 77 people and sentenced to 21 years in prison.

(U) Operations centers and dispatchers have a current common operational picture of an entire jurisdiction, as well as neighboring jurisdictions, and therefore may be positioned to identify diversion tactics early.

(U) Possible indicators of diversion tactics:

— (U) Similar responses or suspicious activities (e.g. hoax devices or bomb threats) in multiple locations throughout the jurisdiction that disperse assets.
— (U) Multiple responses that require specialized or technical equipment that reduce resources.
— (U) A significant incident or several minor incidents that require a commitment of resources to investigate or mitigate.
— (U) Unexplained increases in responses or activity inconsistent with familiar patterns within the area of responsibility.