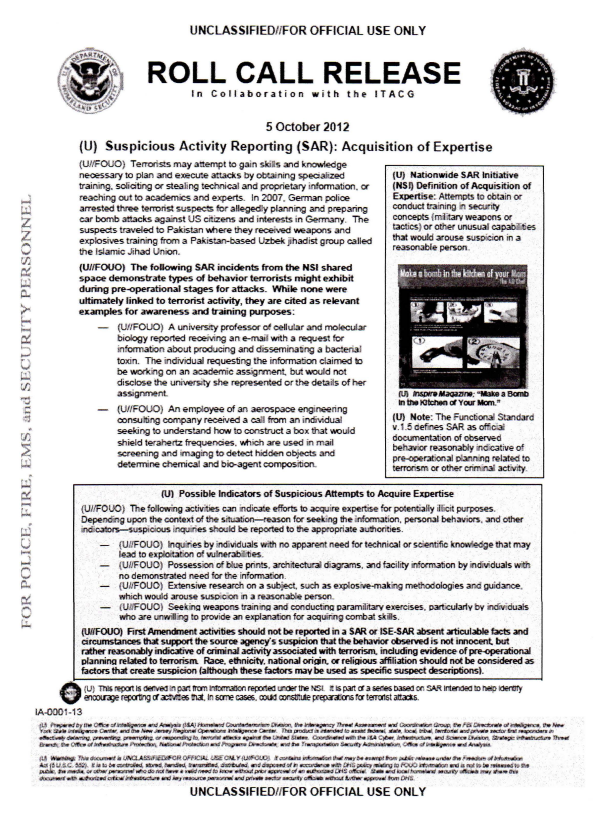 (U//FOUO) Terrorists may attempt to gain skills and knowledge necessary to plan and execute attacks by obtaining specialized training, soliciting or stealing technical and proprietary information, or reaching out to academics and experts. In 2007, German police arrested three terrorist suspects for allegedly planning and preparing car bomb attacks against US citizens and interests in Germany. The suspects traveled to Pakistan where they received weapons and explosives training from a Pakistan-based Uzbek jihadist group called the Islamic Jihad Union.

(U//FOUO) The following SAR incidents from the NSI shared space demonstrate types of behavior terrorists might exhibit during pre-operational stages for attacks. While none were ultimately linked to terrorist activity, they are cited as relevant examples for awareness and training purposes:

– (U//FOUO) A university professor of cellular and molecular biology reported receiving an e-mail with a request for information about producing and disseminating a bacterial toxin. The individual requesting the information claimed to be working on an academic assignment, but would not disclose the university she represented or the details of her assignment

– (U//FOUO) An employee of an aerospace engineering consulting company received a call from an individual seeking to understand how to construct a box that could shield terahertz frequencies, which are used in mail screening and imaging to detect hidden objects and determine chemical and bio-agent composition.

(U) Possible Indicators of Suspicious Attempts to Acquire Expertise

(U//FOUO) The following activities can indicate efforts to acquire expertise for potentially illicit purposes.  Depending upon the context of the situation–reason for seeking the information, personal behaviors, and other indicators–suspicious inquiries should be reported to the appropriate authorities.

– (U//FOUO) Inquiries by individuals with no apparent need for technical or scientific knowledge that may lead to exploitation of vulnerabilities.
– (U//FOUO) Possession of blue prints, architectural diagrams, and facility information by individuals with no demonstrated need for the information
– (U//FOUO) Extensive research on a subject, such as explosive-making methodologies and guidance, which would arouse suspicion in a reasonable person.
– (U//FOUO) Seeking weapons training and conducting paramilitary exercises, particularly by individuals who are unwilling to provide an explanation for acquiring combat skills.