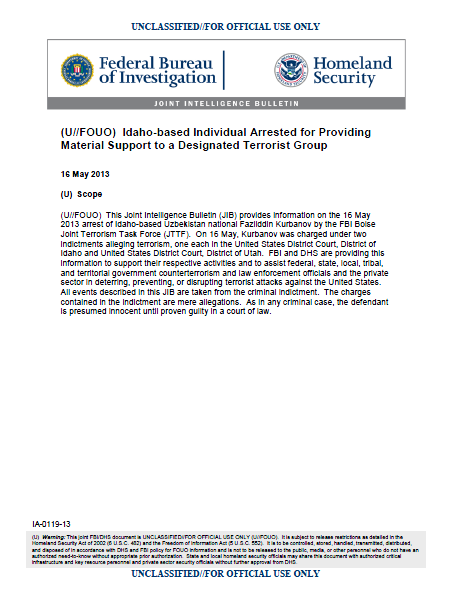 (U//FOUO) This Joint Intelligence Bulletin (JIB) provides information on the 16 May 2013 arrest of Idaho-based Uzbekistan national Fazliddin Kurbanov by the FBI Boise Joint Terrorism Task Force (JTTF). On 16 May, Kurbanov was charged under two indictments alleging terrorism, one each in the United States District Court, District of Idaho and United States District Court, District of Utah. FBI and DHS are providing this information to support their respective activities and to assist federal, state, local, tribal, and territorial government counterterrorism and law enforcement officials and the private sector in deterring, preventing, or disrupting terrorist attacks against the United States. All events described in this JIB are taken from the criminal indictment. The charges contained in the indictment are mere allegations. As in any criminal case, the defendant is presumed innocent until proven guilty in a court of law.

— (U//FOUO) The District of Idaho indictment alleges that from in or about August 2012 through May 2013, Fazliddin Kurbanov knowingly and intentionally conspired with co-conspirators to provide material support and resources to the Islamic Movement of Uzbekistan (IMU), a designated terrorist group.

— (U//FOUO) The District of Idaho indictment alleges that Fazliddin Kurbanov conspired to provide personnel, computer software, and money to the IMU, knowing that the IMU has engaged in terrorist activity and terrorism.

— (U//FOUO) The District of Idaho indictment alleges that on or about 15 November 2012, Fazliddin Kurbanov knowingly possessed a firearm not registered to him in the National Firearms Registration and Transfer Record.

— (U//FOUO) The District of Utah indictment alleges that from 14 January to 24 January 2013, Fazliddin Kurbanov knowingly taught and demonstrated the making and use of an explosive with the intent that the teaching, demonstration, and information be used for violent activity. Kurbanov showed Internet videos, provided written recipes and verbal instructions, and conducted instructional shopping trips which informed as to the construction and use of an improvised explosive device (IED).

(U//FOUO) Fazliddin Kurbanov’s alleged conspiracy highlights the continued presence of US-based individuals who maintain interest in conducting homeland-based attacks. FBI and DHS encourage federal, state, local, tribal, and territorial counterterrorism officials to remain alert and immediately report suspicious activity and potential behavioral indicators of pre-operational terrorism planning activities, to include acquisition of materials and construction of explosive devices. Some of these behavioral indicators may be constitutionally protected activities and should be supported by additional facts to justify increased suspicion. No single behavioral indicator should be the sole basis for law enforcement action. The totality of behavioral indicators and other relevant circumstances should be evaluated when considering any law enforcement response or action.

— (U//FOUO) Suspicious purchases of items that could be used to construct an explosive device, including hydrogen peroxide, acetone, gasoline, propane, or fertilizer;
— (U//FOUO) Unusual or prolonged interest in or attempts to gain sensitive information about security measures of personnel, entry points, peak days and hours of operation, and access controls such as alarms or locks;
— (U//FOUO) Observation of security reaction drills or procedures; multiple false alarms or fictitious emergency calls to same locations or similar venues;
— (U//FOUO) Discreet use of cameras or video recorders, sketching, or note-taking consistent with pre-operational surveillance;
— (U//FOUO) Observation of or questions about facility security measures, to include barriers, restricted areas, cameras, and intrusion detection systems; and,
— (U//FOUO) Suspicious activities in storage facilities or other areas that could be used to construct an explosive device.