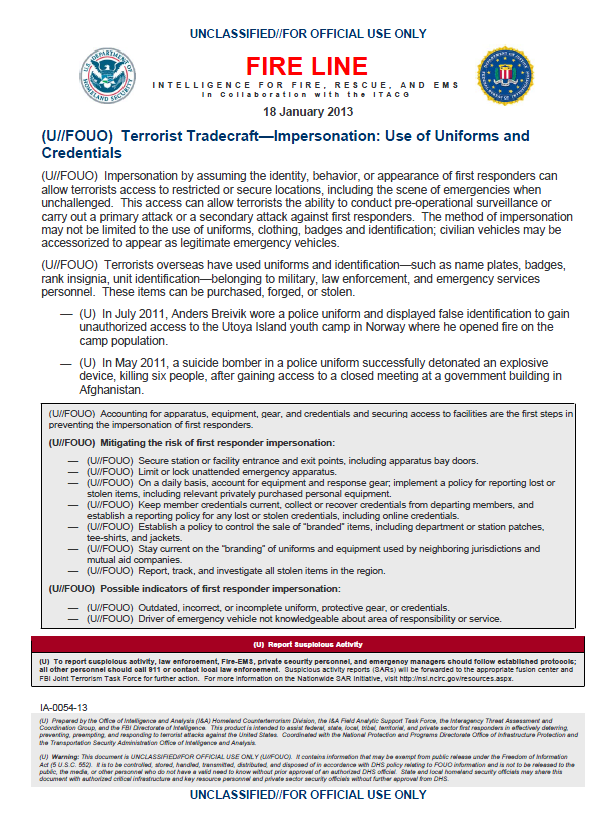 Terrorist Tradecraft—Impersonation: Use of Uniforms and Credentials

(U//FOUO) Impersonation by assuming the identity, behavior, or appearance of first responders can allow terrorists access to restricted or secure locations, including the scene of emergencies when unchallenged. This access can allow terrorists the ability to conduct pre-operational surveillance or carry out a primary attack or a secondary attack against first responders. The method of impersonation may not be limited to the use of uniforms, clothing, badges and identification; civilian vehicles may be accessorized to appear as legitimate emergency vehicles.

— (U) In July 2011, Anders Breivik wore a police uniform and displayed false identification to gain unauthorized access to the Utoya Island youth camp in Norway where he opened fire on the camp population.

— (U) In May 2011, a suicide bomber in a police uniform successfully detonated an explosive device, killing six people, after gaining access to a closed meeting at a government building in Afghanistan.

(U//FOUO) Accounting for apparatus, equipment, gear, and credentials and securing access to facilities are the first steps in preventing the impersonation of first responders.

— (U//FOUO) Outdated, incorrect, or incomplete uniform, protective gear, or credentials.
— (U//FOUO) Driver of emergency vehicle not knowledgeable about area of responsibility or service.