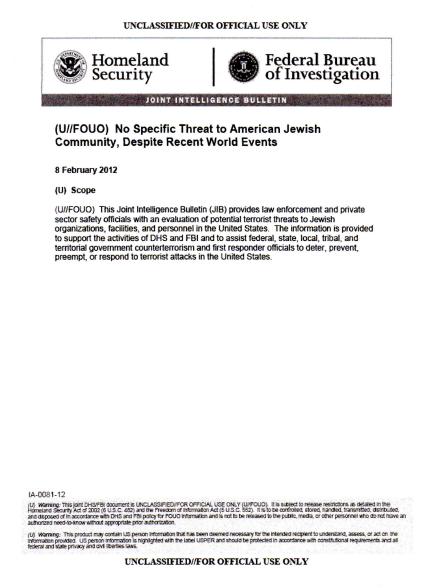 (U//FOUO) This Joint Intelligence Bulletin (JIB) provides law enforcement and private sector safety officials with an evaluation of potential terrorist threats to Jewish organizations, facilities, and personnel in the United states. The information is provided to support the activities of DHS and FBI and to assist federal, state, local, tribal, and territorial government counterterrorism and first responder officials to deter, prevent, preempt, or respond to terrorist attacks in the United States.

(U//FOUO) Heightened tensions between Israel, Iran, and the United States-stemming from threats against Israeli or Jewish targets in Asia and Europe attacks on Iranian nuclear scientists; global economic sanctions against Iran; and press reporting of Israel’s possible intent to attack Iran’s nuclear facilities-have contributed to the perception of an increased threat to the Jewish community worldwide from Iran or its surrogates. Hizballah’s longstanding interest in exacting retribution for the February 2008 death of Imad Mughniyah–a senior founding member of Hizballah who was killed in Syria–may also be fueling these concerns. We have no information, however, to indicate that these recent events have significantly increased the threat to Jewish organizations, facilities, and personnel in the United States.

– (U) On 3 February 2012, Iranian Supreme Leader Ayatollah Ali Khamenei publicly threatened to retaliate against economic sanctions levied on his country and to support militant groups who oppose Israel.

– (U) On 24 January 2012, the Israel Defense Forces Chief of Staff publicly remarked that terrorist groups are trying to conduct attacks against Israeli targets abroad, according to a respected Israeli newspaper, and some Israeli consulates in the United States have reportedly circulated letters warning of escalating threats to Israeli and Jewish facilities. Additionally, letters containing an unidentified, non-toxic white powder were recently mailed to various Israeli consulates in the United States, Europe, and Canada, according to open source reporting.

– (U) Three Azerbaijanis allegedly linked to Iranian intelligence were arrested for plotting to attack the Israeli Ambassador to Azerbaijan and the leader of a local Jewish school, according to late January international media reporting.

– (U//FOUO) An alleged Hizballah plot to attack Israeli or Jewish targets in Asia was reportedly disrupted in Thailand last month, although the targets and timing of the operation are unclear; press reporting suggested a similar threat existed in Europe, but we have no information to indicate that similar plots were directed at the Homeland.

(U//FOUO) Jewish organizations, facilities, and personnel in the United States have been a focus of violent extremists in the past and we assess that they will likely remain a target of violent groups and individuals in the future.