The following bulletin was obtained from the website of a local ABC News affiliate. 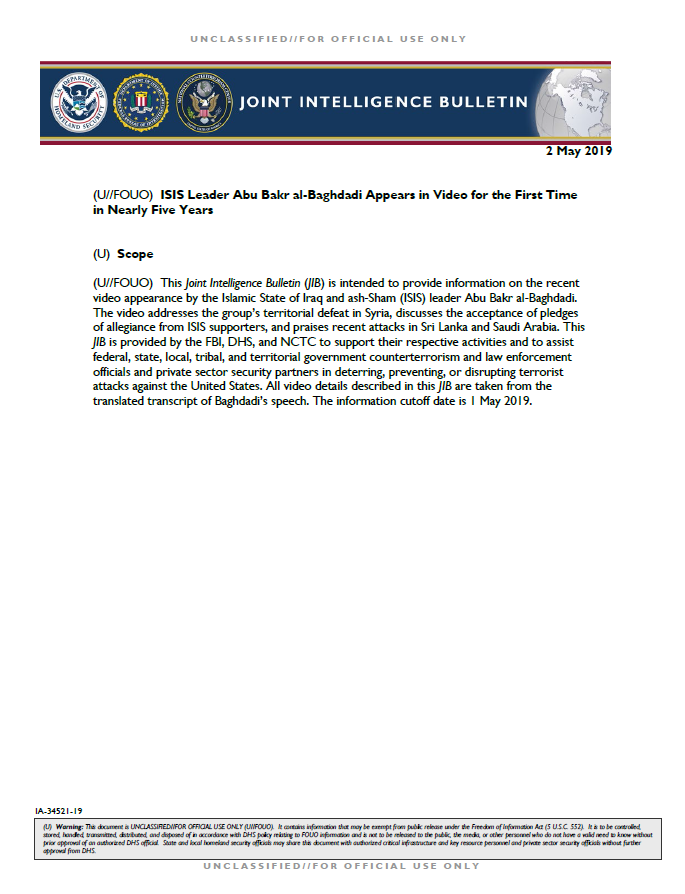 (U//FOUO) This Joint Intelligence Bulletin (JIB) is intended to provide information on the recent video appearance by the Islamic State of Iraq and ash-Sham (ISIS) leader Abu Bakr al-Baghdadi. The video addresses the group’s territorial defeat in Syria, discusses the acceptance of pledges of allegiance from ISIS supporters, and praises recent attacks in Sri Lanka and Saudi Arabia. This JIB is provided by the FBI, DHS, and NCTC to support their respective activities and to assist federal, state, local, tribal, and territorial government counterterrorism and law enforcement officials and private sector security partners in deterring, preventing, or disrupting terrorist attacks against the United States. All video details described in this JIB are taken from the translated transcript of Baghdadi’s speech. The information cutoff date is 1 May 2019.

(U//FOUO) On 29 April 2019, ISIS’s al-Furqan Media Establishment publicly released an 18-minute video message in Arabic titled “In the Company of the Amir of the Believers”, which shows ISIS leader Abu Bakr al-Baghdadi sitting on a carpet in an undisclosed location with an assault rifle at his side. This is Baghdadi’s first public statement since his August 2018 audio message, and his first video appearance since July 2014, when Baghdadi was filmed introducing himself as “caliph” of the newly-declared caliphate at the Grand Mosque in Mosul, Iraq.

(U) Baghdadi Vows a “Long Battle Ahead” Despite Defeat in Syria

• (U//FOUO) Baghdadi emphasizes that ISIS’s fight is not over, stating, “In truth, the battle between Islam and its people with the Cross and its people is long.” He further explains that ISIS is engaged in a multigenerational struggle and they plan to wear down their enemies with attrition, emphasizing that “jihad will continue until Judgement Day” and that “God Almighty ordered us to wage jihad and did not order us to achieve victory.”

• (U//FOUO) Baghdadi acknowledges that ISIS lost the war in Baghuz, Syria, but emphasizes that the “bravery, steadfastness, and endurance of the Ummah of Islam was evident.” He states that ISIS’s soldiers did not abandon their faith during the battle, and sacrificed their lives rather than giving away land to ISIS’s enemies.

• (U//FOUO) Baghdadi praises the members in all of ISIS’s provinces for their “unified raid to avenge their brothers in Syria, which amounted to 92 operations in eight countries.” He states these attacks indicate the cohesion and steadfastness of the “mujahedeen.” Baghdadi praises and thanks the now-deceased emirs, provincial governors, military personnel, and media members from various countries for their support to ISIS.

• (U//FOUO) Video footage displays the Sri Lanka attackers—who conducted a series of suicide bombings against luxury hotels and Christian churches in Sri Lanka on 21 April, killing approximately 250 people—pledging allegiance to Baghdadi, while audio of purportedly Baghdadi’s voice is heard stating, “You brothers in Sri Lanka have pleased the monotheists by their commando operations that unsettled the Crusaders in their Easter celebrate to avenge their brothers in Baghuz.” Baghdadi continues with “praise be to God, for among those killed were some Americans and Europeans.” Baghdadi congratulates the Sri Lanka attackers on their pledge of allegiance to join the “caliphate,” and asked God to accept them as martyrs.

• (U//FOUO) Baghdadi acknowledges the attack in Saudi Arabia—where ISIS fighters attacked a Saudi security building in Az Zulfi on 21 April—and asked God that it be “followed by another one.” He calls on members in Saudi Arabia “to continue down the path of jihad” against the Saudi regime.

• (U//FOUO) While Baghdadi appears in discussion with unidentified men, text on the screen indicates he was giving directives to “double the effort and intensify the blows against the Crusaders, apostates, and their supporters.”

(U) Baghdadi Accepts Pledges of Allegiance and Praises Global Network

• (U//FOUO) The video shows Baghdadi being handed booklets by one of the unidentified men which are labeled with the names of ISIS provinces, including Libya, Khorasan, Somalia, Yemen, Caucasus, West Africa, Central Africa, and Turkey, as well as Tunisia, which is not publicly identified as a province. This is the first time ISIS has referred to Turkey as an official province, or “wilayah,” in its media releases.

• (U//FOUO) Additionally, Baghdadi accepts pledges of allegiance from ISIS members in Burkina Faso and Mali, and congratulates them for joining the “caliphate.” He recommends they intensify their attacks against France and its allies and to avenge their brothers in Iraq and Syria.

• (U//FOUO) Baghdadi congratulates ISIS members in Libya for their resoluteness and their raid on the town of Al Fugaha, Libya. He states that despite their withdrawal from it, they have shown their enemies that they are capable of taking the initiative, knowing their battle today is a battle of attrition.

(U) Baghdadi’s Image Starkly Contrasts with Last Appearance in 2014

(U//FOUO) The video’s presentation of Baghdadi as an insurgent leader—similar to the images of now-deceased al-Qa‘ida (AQ) leader Usama Bin Laden and now-deceased AQ in Iraq leader Abu Musab al-Zarqawi from prior videos—contrasts with Baghdadi’s July 2014 appearance at the Grand Mosque in Mosul, Iraq, where he delivered a formal address from the mosque’s pulpit wearing a black turban and robe probably to evoke images of the last caliphs who ruled from Baghdad.

(U//FOUO) The FBI, DHS, and NCTC assess Baghdadi’s appearance almost certainly will bolster the morale for ISIS’s existing supporters around the world, including those in the United States, by indicating Baghdadi is alive and in control of the group as of late April 2019. Most homegrown violent extremists (HVEs) generally do not mobilize to violence in response to specific events and instead are usually influenced by a confluence of sociopolitical, ideological, and personal factors.a However, those wavering in their commitment to ISIS might feel a sense of renewed devotion to the group as Baghdadi is alive and apparently still managing ISIS.