The following bulletin was originally obtained and published by Yahoo News. 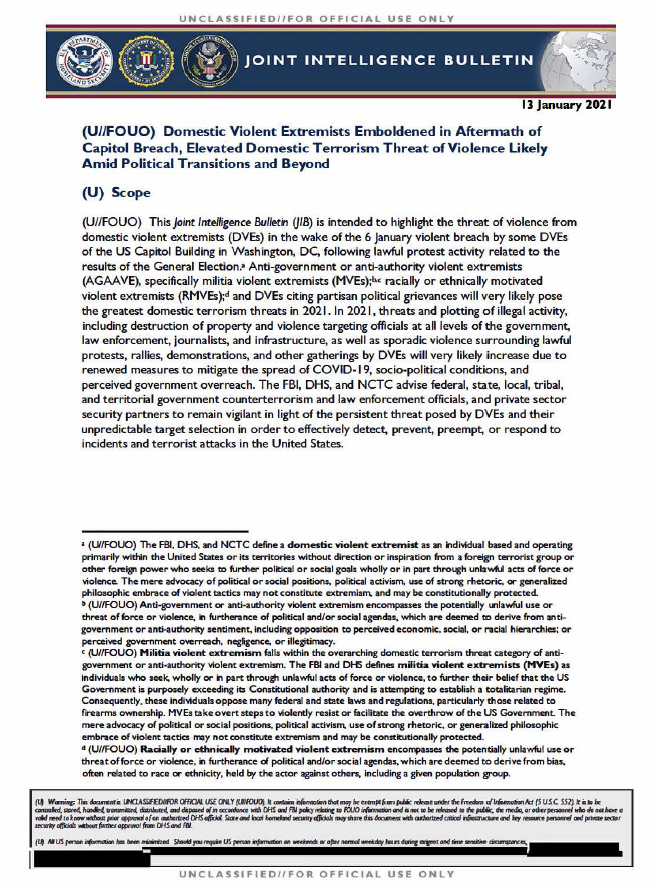 (U//FOUO)  This Joint Intelligence Bulletin (JIB) is intended to highlight the threat of violence from domestic violent extremists (DVEs) in the wake of the 6 January violent breach by some DVEs of the US Capitol Building in Washington, DC, following lawful protest activity related to the results of the General Election. Anti-government or anti-authority violent extremists (AGAAVE), specifically militia violent extremists (MVEs); racially or ethnically motivated violent extremists (RMVEs); and DVEs citing partisan political grievances will very likely pose the greatest domestic terrorism threats in 2021. In 2021 , threats and plotting of illegal activity, including destruction of property and violence targeting officials at all levels of the government, law enforcement, journalists, and infrastructure, as well as sporadic violence surrounding lawful protests, rallies, demonstrations, and other gatherings by DVEs will very likely increase due to renewed measures to mitigate the spread of COVID-19, socio-political conditions, and perceived government overreach. The FBI, DHS, and NCTC advise federal, state, local, tribal, and territorial government counterterrorism and law enforcement officials, and private sector security partners to remain vigilant in light of the persistent threat posed by DVEs and their unpredictable target selection in order to effectively detect. prevent. preempt. or respond to incidents and terrorist attacks in the United States.

(U//FOUO) The 6 January 2021 violent breach by suspected DVEs into the US Capitol Building very likely will serve as a significant driver of violence for a diverse set of DVEs. Attendance at the lawful protest by ideologically diverse DVEs and others, the subsequent engagement of a sizeable group from that protest in the breach, and the death of an individual directly engaged in the breach very likely will serve to galvanize DVEs and increase collaboration primarily between MVEs and RMVEs, as well as DVEs who adhere to QAnon conspiracy theories. These DVEs and others may also perceive the event as a step toward achieving their initiatives, and consider the death of a perceived like-minded individual as an act of martyrdom. Some DVEs’ view the 6 January event as a success, in conjunction with the potential to exploit follow-on lawful gatherings and ideological drivers–including conspiracy theories, such as QAnon–likely will also inspire some DVEs and others to engage in more sporadic, lone actor or small cell violence against common DVE targets, including racial, ethnic, or religious minorities and institutions, law enforcement, and government officials and buildings. Criminal activity by rioters targeting members of the media at the breach is also indicative of an increased and prolonged DVE threat of targeted violence against members of the press due to perceived complicity in a system hostile to their beliefs.

» (U//FOUO) During the riot, an alleged QAnon-supporter who traveled to Washington, DC, engaged in lawful protests, entered the US Capitol illegally, and was shot by law enforcement as she attempted to gain access to a restricted area, subsequently succumbing to her injuries, according to open source reporting.

» (U//FOUO) Some participants active at the Capitol displayed insignias used or adopted by multiple DVEs, including three percenters (III%) and other MVE symbols–the Confederate flag and symbols associated with neo-Nazis–popular with RMVEs. Nooses and plastic restraints were carried or stationed at or near the Capitol by some rioters, possibly to demonstrate their intent to cause harm to government officials. Symbols associated with QAnon conspiracy theories were also displayed by some rioters.

(U//FOUO) Amplified perceptions of fraud surrounding the outcome of the General Election and the change in control of the Presidency and Senate–when combined with long-standing DVE drivers such as perceived government or law enforcement overreach, and the anticipation of legislation perceived by some DVEs to oppose or threaten their beliefs–very likely will lead to an increase in DVE violence. Additionally, narratives surrounding the perceived success of the 6 January breach of the US Capitol, and the proliferation of conspiracy theories will likely lead to an increased DVE threat towards representatives of federal, state, and local governments across the United States, particularly in the lead-in to the 20 January Presidential Inauguration. The targeting of government buildings and officials is consistent with observed activity in 2020, when armed individuals, including DVEs, threatened elected officials and occupied state government buildings.

» (U//FOUO) Since the 6 January event, violent online rhetoric regarding the 20 January Presidential Inauguration has increased, with some calling for unspecified “justice” for the 6 January fatal shooting by law enforcement of a participant who had illegally entered the Capitol Building, and another posting that “many” armed individuals would return on 19 January, according to open source reporting. The recent removal efforts by social media platforms used by DVEs may push some to revert back to other platforms they perceive as more secure, further challenging our ability to identify and warn of specific threats.

» (U//FOUO) The increasing prevalence and influence of conspiracy theories based on a belief in the existence of global or “deep state” actors who work to manipulate various social, political, and/or economic conditions of the United States very likely serves as a driver of some DVE violence. Some rioters at the 6 January breach were alleged supporters of QAnon conspiracy theories, according to open source reporting. Other DVEs may be motivated to target government officials and buildings because of similar theories, including the “Great Reset.”

(U//FOUO) The FBI, OHS, and NCTC remain concerned about the potential for a loosely organized, sustained, and significant DYE population mobilizing to violence based on social media calls to target government infrastructure or officials. The shared false narrative of a “stolen” election and opposition to the change in control of the executive and legislative branches of the federal government may lead some individuals to adopt the belief that there is no political solution to address their grievances and violent action is necessary. Additionally, in-person engagement between DVEs of differing ideological goals during the Capitol breach likely served to foster connections, which may increase DVEs’ willingness, capability, and motivation to attack and undermine a government they view as illegitimate.

(U//FOUO) In the near term, DVEs could exploit upcoming events to engage in or justify violence, including events attended by MVEs and “boogaloo”‘ adherents scheduled nationally from 16 to 20 January; the 20 January Presidential Inauguration and associated events in Washington, DC; and any departure of the 4Sth President from office prior to the end of his term. The “boogaloo” is a concept most commonly used by DVEs, particularly MVEs, to reference an impending second civil war or insurgency against the US Government Calls for revolution may especially resonate with MVEs, who often justify violence based on their belief that they are guardians of the Constitution and the legacies of the American Revolution. While they may not necessarily share the partisan views of those who engaged in the 6 January breach, MVEs and other DVEs who adhere to the “boogaloo” concept and seek a politically motivated civil war, and RMVEs who seek a race war may exploit the aftermath of the Capitol breach by conducting attacks to destabilize and force a climactic conflict in the United States. These factors, and the broad perception among DVEs that the violent breach was successful, may contribute to DVEs’ willingness to carry out sporadic, lone actor or small cell violence. Such DYE violence may be targeted against racial, ethnic, and/or religious minorities and associated institutions, journalists, members of the LGBTQ+ community, and other targets common among some DVEs.

(U//FOUO) Ongoing law enforcement efforts to arrest individuals who participated in the 6 January Capitol breach could deter some DVEs, and lead others to adjust their tactics and to lessen law enforcement scrutiny. Existing trends in some DVEs’ transition to what they perceive as more secure online communication platforms to discuss threat activity following increased law enforcement scrutiny very likely will continue. Law enforcement may seek to disrupt DVEs prior to any potential violence based on their pre-mobilization illegal activities, including charges related to explosives; illegal or illegally modified weapons; unlawful use of restricted firearm components; and unlawful possession of firearms, ammunition, or body armor by prohibited possessors. Law enforcement may also leverage state and local laws and ordinances that limit or restrict paramilitary activities of private militias. The FBI, OHS, and NCTC urge state and local authorities, to promptly report suspicious activities related to potential domestic violent extremism. The FBI, OHS, and NCTC note that, due to the highly personal nature of radicalization to violence, it is difficult to assess specific indicators that are indicative of US-based violent extremists attempting to support violence at home or abroad.