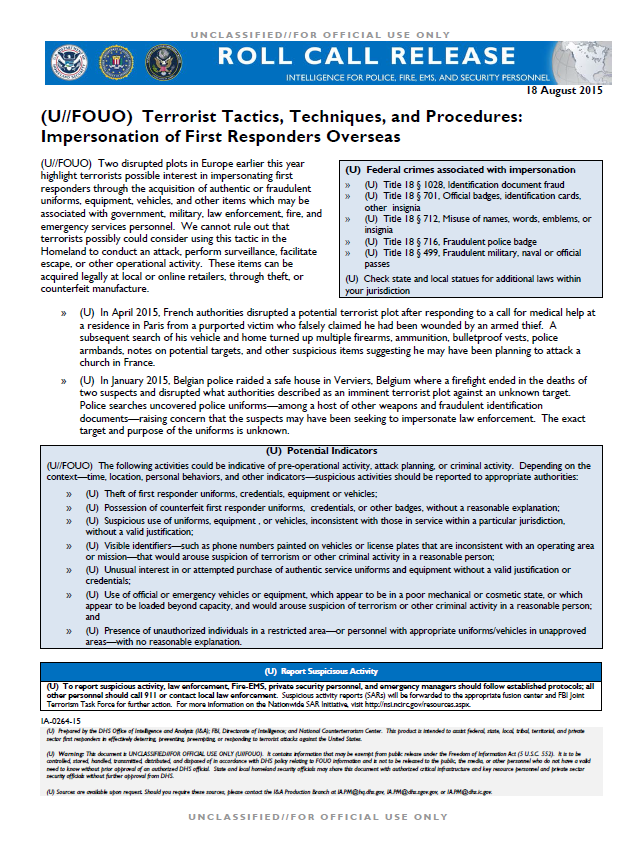 (U//FOUO) Two disrupted plots in Europe earlier this year highlight terrorists possible interest in impersonating first responders through the acquisition of authentic or fraudulent uniforms, equipment, vehicles, and other items which may be associated with government, military, law enforcement, fire, and emergency services personnel. We cannot rule out that terrorists possibly could consider using this tactic in the Homeland to conduct an attack, perform surveillance, facilitate escape, or other operational activity. These items can be acquired legally at local or online retailers, through theft, or counterfeit manufacture.

» (U) In April 2015, French authorities disrupted a potential terrorist plot after responding to a call for medical help at a residence in Paris from a purported victim who falsely claimed he had been wounded by an armed thief. A subsequent search of his vehicle and home turned up multiple firearms, ammunition, bulletproof vests, police armbands, notes on potential targets, and other suspicious items suggesting he may have been planning to attack a church in France.

» (U) In January 2015, Belgian police raided a safe house in Verviers, Belgium where a firefight ended in the deaths of two suspects and disrupted what authorities described as an imminent terrorist plot against an unknown target. Police searches uncovered police uniforms—among a host of other weapons and fraudulent identification documents—raising concern that the suspects may have been seeking to impersonate law enforcement. The exact target and purpose of the uniforms is unknown.

(U//FOUO) The following activities could be indicative of pre-operational activity, attack planning, or criminal activity. Depending on the context—time, location, personal behaviors, and other indicators—suspicious activities should be reported to appropriate authorities: