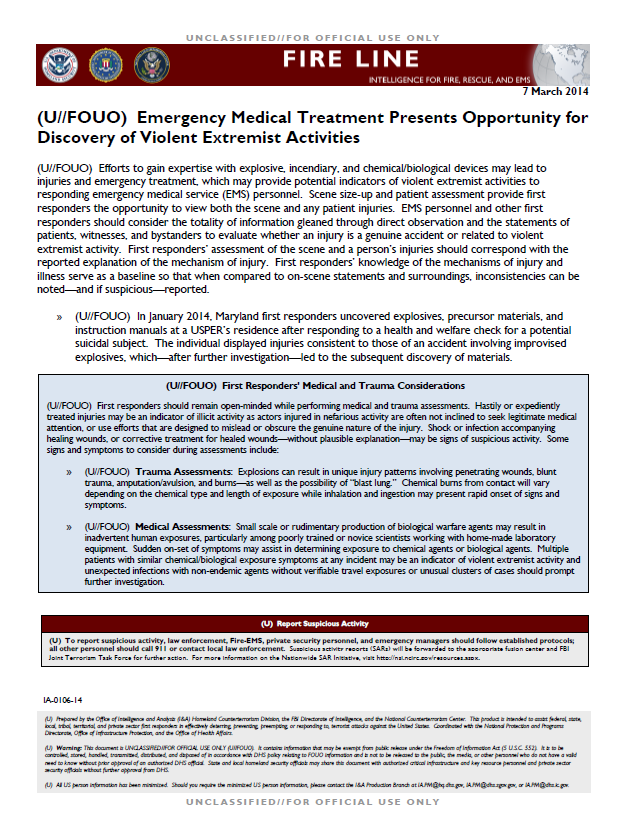 (U//FOUO) Efforts to gain expertise with explosive, incendiary, and chemical/biological devices may lead to injuries and emergency treatment, which may provide potential indicators of violent extremist activities to responding emergency medical service (EMS) personnel. Scene size-up and patient assessment provide first responders the opportunity to view both the scene and any patient injuries. EMS personnel and other first responders should consider the totality of information gleaned through direct observation and the statements of patients, witnesses, and bystanders to evaluate whether an injury is a genuine accident or related to violent extremist activity. First responders’ assessment of the scene and a person’s injuries should correspond with the reported explanation of the mechanism of injury. First responders’ knowledge of the mechanisms of injury and illness serve as a baseline so that when compared to on-scene statements and surroundings, inconsistencies can be noted—and if suspicious—reported.

» (U//FOUO) In January 2014, Maryland first responders uncovered explosives, precursor materials, and instruction manuals at a USPER’s residence after responding to a health and welfare check for a potential suicidal subject. The individual displayed injuries consistent to those of an accident involving improvised explosives, which—after further investigation—led to the subsequent discovery of materials.

(U//FOUO) First responders should remain open-minded while performing medical and trauma assessments. Hastily or expediently treated injuries may be an indicator of illicit activity as actors injured in nefarious activity are often not inclined to seek legitimate medical attention, or use efforts that are designed to mislead or obscure the genuine nature of the injury. Shock or infection accompanying healing wounds, or corrective treatment for healed wounds—without plausible explanation—may be signs of suspicious activity. Some signs and symptoms to consider during assessments include:

» (U//FOUO) Trauma Assessments: Explosions can result in unique injury patterns involving penetrating wounds, blunt trauma, amputation/avulsion, and burns—as well as the possibility of “blast lung.” Chemical burns from contact will vary depending on the chemical type and length of exposure while inhalation and ingestion may present rapid onset of signs and symptoms.

» (U//FOUO) Medical Assessments: Small scale or rudimentary production of biological warfare agents may result in inadvertent human exposures, particularly among poorly trained or novice scientists working with home-made laboratory equipment. Sudden on-set of symptoms may assist in determining exposure to chemical agents or biological agents. Multiple patients with similar chemical/biological exposure symptoms at any incident may be an indicator of violent extremist activity and unexpected infections with non-endemic agents without verifiable travel exposures or unusual clusters of cases should prompt further investigation.