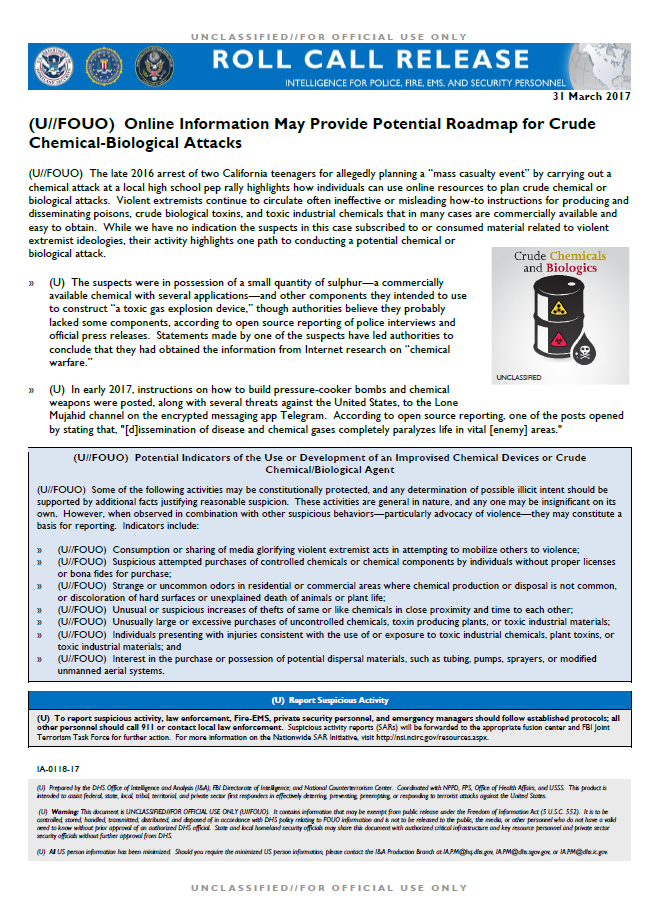 (U//FOUO) The late 2016 arrest of two California teenagers for allegedly planning a “mass casualty event” by carrying out a chemical attack at a local high school pep rally highlights how individuals can use online resources to plan crude chemical or biological attacks. Violent extremists continue to circulate often ineffective or misleading how-to instructions for producing and disseminating poisons, crude biological toxins, and toxic industrial chemicals that in many cases are commercially available and easy to obtain. While we have no indication the suspects in this case subscribed to or consumed material related to violent extremist ideologies, their activity highlights one path to conducting a potential chemical or biological attack.

» (U) The suspects were in possession of a small quantity of sulphur—a commercially available chemical with several applications—and other components they intended to use to construct “a toxic gas explosion device,” though authorities believe they probably lacked some components, according to open source reporting of police interviews and official press releases. Statements made by one of the suspects have led authorities to conclude that they had obtained the information from Internet research on “chemical warfare.”

» (U) In early 2017, instructions on how to build pressure-cooker bombs and chemical weapons were posted, along with several threats against the United States, to the Lone Mujahid channel on the encrypted messaging app Telegram. According to open source reporting, one of the posts opened by stating that, “[d]issemination of disease and chemical gases completely paralyzes life in vital [enemy] areas.”

(U//FOUO) Some of the following activities may be constitutionally protected, and any determination of possible illicit intent should be supported by additional facts justifying reasonable suspicion. These activities are general in nature, and any one may be insignificant on its own. However, when observed in combination with other suspicious behaviors—particularly advocacy of violence—they may constitute a basis for reporting. Indicators include:

» (U//FOUO) Consumption or sharing of media glorifying violent extremist acts in attempting to mobilize others to violence;
» (U//FOUO) Suspicious attempted purchases of controlled chemicals or chemical components by individuals without proper licenses or bona fides for purchase;
» (U//FOUO) Strange or uncommon odors in residential or commercial areas where chemical production or disposal is not common, or discoloration of hard surfaces or unexplained death of animals or plant life;
» (U//FOUO) Unusual or suspicious increases of thefts of same or like chemicals in close proximity and time to each other;
» (U//FOUO) Unusually large or excessive purchases of uncontrolled chemicals, toxin producing plants, or toxic industrial materials;
» (U//FOUO) Individuals presenting with injuries consistent with the use of or exposure to toxic industrial chemicals, plant toxins, or toxic industrial materials; and
» (U//FOUO) Interest in the purchase or possession of potential dispersal materials, such as tubing, pumps, sprayers, or modified unmanned aerial systems.