The following bulletin prepared by the Department of Homeland Security’s Office of Intelligence and Analysis in coordination with the FBI’s Directorate of Intelligence and the National Counterterrorism Center was issued in January to law enforcement and first responders throughout the country. 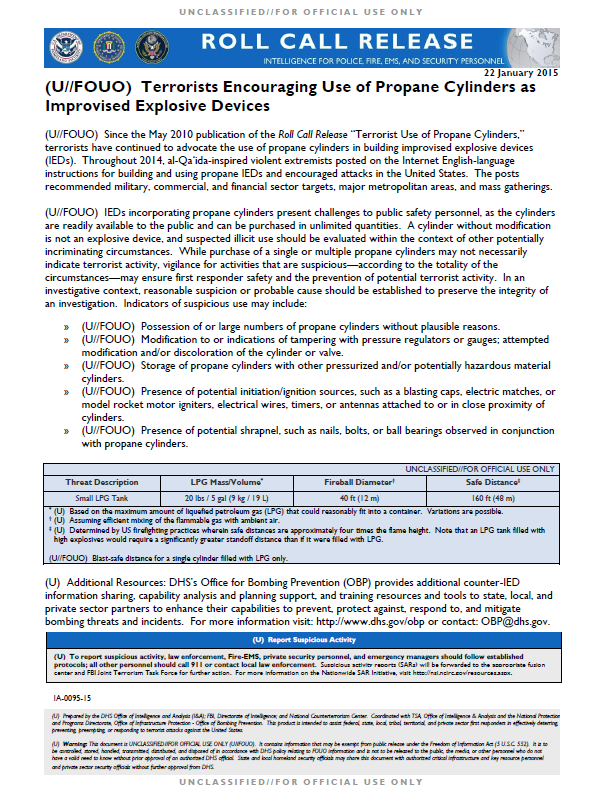 (U//FOUO) Since the May 2010 publication of the Roll Call Release “Terrorist Use of Propane Cylinders,” terrorists have continued to advocate the use of propane cylinders in building improvised explosive devices (IEDs). Throughout 2014, al-Qa‘ida-inspired violent extremists posted on the Internet English-language instructions for building and using propane IEDs and encouraged attacks in the United States. The posts recommended military, commercial, and financial sector targets, major metropolitan areas, and mass gatherings.

(U//FOUO) IEDs incorporating propane cylinders present challenges to public safety personnel, as the cylinders are readily available to the public and can be purchased in unlimited quantities. A cylinder without modification is not an explosive device, and suspected illicit use should be evaluated within the context of other potentially incriminating circumstances. While purchase of a single or multiple propane cylinders may not necessarily indicate terrorist activity, vigilance for activities that are suspicious––according to the totality of the circumstances––may ensure first responder safety and the prevention of potential terrorist activity. In an investigative context, reasonable suspicion or probable cause should be established to preserve the integrity of an investigation. Indicators of suspicious use may include:

» (U//FOUO) Possession of or large numbers of propane cylinders without plausible reasons.

» (U//FOUO) Modification to or indications of tampering with pressure regulators or gauges; attempted modification and/or discoloration of the cylinder or valve.

» (U//FOUO) Storage of propane cylinders with other pressurized and/or potentially hazardous material cylinders.

» (U//FOUO) Presence of potential initiation/ignition sources, such as a blasting caps, electric matches, or model rocket motor igniters, electrical wires, timers, or antennas attached to or in close proximity of cylinders.

» (U//FOUO) Presence of potential shrapnel, such as nails, bolts, or ball bearings observed in conjunction with propane cylinders.