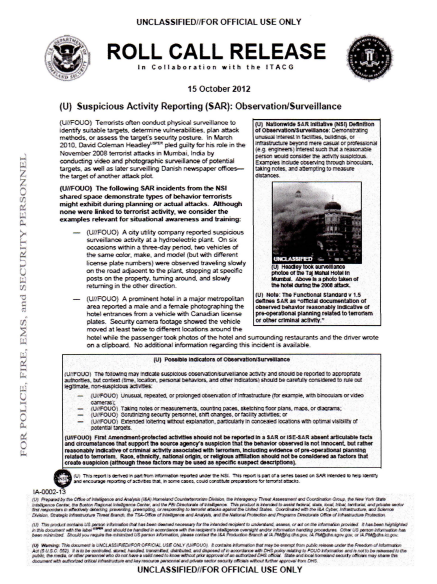 (U//FOUO) The following SAR incidents from the NSI shared space demonstrate types of behavior terrorists might exhibit during planning or actual attacks. Although none were linked to terrorist activity, we consider the examples relevant for situational awareness and training:

– (U//FOUO) A city utility company reported suspicious surveillance activity at a hydroelectric plant.  On six occasions within a three-day period, two vehicles of the same color, make, and model (but with different license plate numbers) were observed traveling slowly on the road adjacent to the plant, stopping at specific posts on the property, turning around, and slowly returning in the other direction.
– (U//FOUO) A prominent hotel in a major metropolitan area reported a male and a female photographing the hotel entrances from a vehicle with Canadian license plates.  Security camera footage showed the vehicle moved at lease twice to different locations around the hotel while the passenger took photos of the hotel and surrounding restaurants and the driver on a clipboard.  No additional information regarding this incident is available.

(U) Possible Indicators of Observation/Surveillance

(U//FOUO) The following may indicate suspicious observation/surveillance activity and should be reported to appropriate authorities, but context (time, location, personal behaviors, and other indicators) should be carefully considered to rule out legitimate, non-suspicious activities: