DHS and FBI Bulletins on OpUSA Tools and Tactics

The following bulletins were released May 6, 2013 by the National Cybersecurity and Communications Integration Center and FBI in anticipation of the OpUSA campaign.  A DHS bulletin on the campaign was released May 2, 2013 by computer security journalist Brian Krebs. 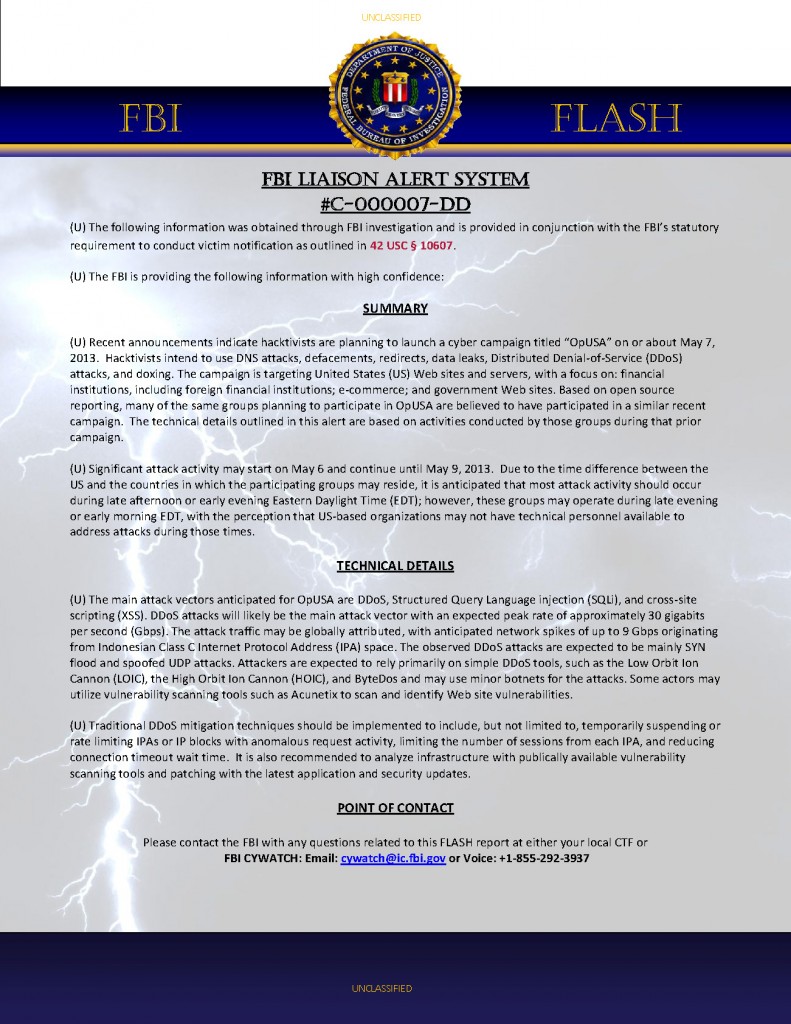 Multiple groups, and individual hacker handles have claimed their intent to attack U.S. websites as part of OpUSA. As seen in many hacktivist operations (Ops), willing participants have posted free tools to assist other like minded individuals in their attack efforts. Often, more coordinated attacks will name a specific tool, target, day and time for the attack. That has not been the case for OpUSA thus far. Individual hacker groups seem to be conducting attacks independently, each claiming responsibility for individual defacements and data breaches that have supposedly recently taken place. Below you will find some of the tools being posted in conversations about OpUSA and links to US-CERT sites which provide background on the vulnerabilities exploited by these tools as well as mitigation advice for computer network defense actions.

The following is a sampling of tools being offered to willing members interested in using SQL attacks during OpUSA.

DDoS tools are often used by hacktivist so users may voluntary botnets. These are a list of the available DDoS tools via Open Source:

Several password crackers and stealers were spotted on related forums. Some of which are found below:

In additional to options like the onion router (TOR), OpUSA members have advertised the following to assist actors in obfuscating their activity.

Hacker groups have mentioned the following tools among several others that don’t fit the above categories.

While it is difficult to assess the specific tools that may be used against targeted organizations, this product is intended to provide organizations with an idea of the type of free tools that may be employed against them, so they may better prepare mitigation strategies during OpUSA or similar hacktivist operations. As always, NCCIC reminds users and administrators of the importance of best practices to strengthen the security posture of their organization’s systems. Critical Infrastructure Key Resource (CIKR) owners and operators should work toward a resilient network model that assumes such an attack will occur against their enterprise. The goal is to minimize damage, and provide pathways for restoration of critical business functions in the shortest amount of time possible.