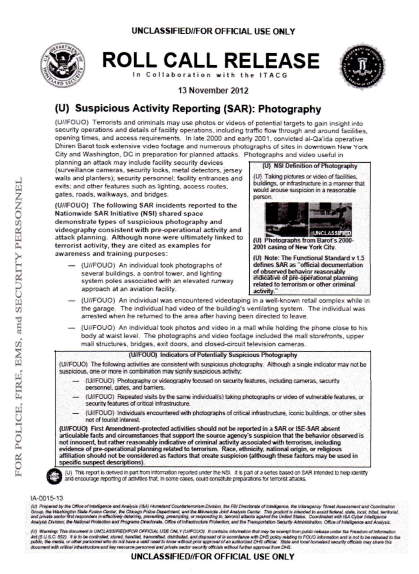 (U//FOUO) Terrorists and criminals may use photos or videos of potential targets to gain insight into security operations and details of facility operations, including traffic flow through and around facilities, opening times, and access requirements. In late 2000 and early 2001, convicted al-Oa’ida operative Dhiren Barot took extensive video footage and numerous photographs of sites in downtown New York City and Washington, DC in preparation for planned attacks. Photographs and video useful in planning an attack may include facility security devices (surveillance cameras, security locks, metal detectors, jersey walls and planters); security personnel; facility entrances and exits; and other features such as lighting, access routes, gates, roads, walkways, and bridges.

(U//FOUO) The following SAR incidents reported to the Nationwide SAR Initiative (NSI) shared space demonstrate types of suspicious photography and videography consistent with pre-operational activity and attack planning. Although none were ultimately linked to terrorist activity, they are cited as examples for awareness and training purposes:

(U//FOUO) An individual took photographs of several buildings, a control tower, and lighting system poles associated with an elevated runway approach at an aviation facility.

(U//FOUO) An individual was encountered videotaping in a well-known retail complex while in the garage. The individual had video of the building’s ventilating system. The individual was
arrested when he returned to the area after; having been directed to leave.

(U//FOUO) An individual took photos and video in a mall while holding the phone close to his body at waist level. The photographs and video footage included the mall storefronts, upper mall structures, bridges, exit doors, and closed-circuit television cameras.

(U//FOUO) The following activities are consistent with suspicious photography. Although a single indicator may not be suspicious, one or more in combination may signify suspicious activity: