The following bulletin is an update of a previous DHS-FBI Roll Call Release from 2010. The document was obtained from the website of the Georgia Hospital Association. 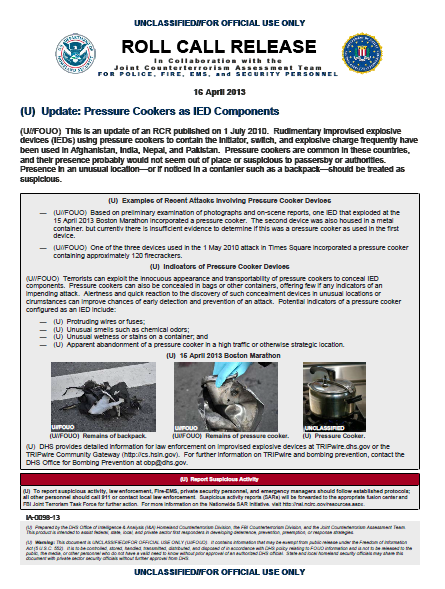 (U//FOUO) This is an update of an RCR published on 1 July 2010. Rudimentary improvised explosive devices (IEDs) using pressure cookers to contain the initiator, switch, and explosive charge frequently have been used in Afghanistan, India, Nepal, and Pakistan. Pressure cookers are common in these countries, and their presence probably would not seem out of place or suspicious to passersby or authorities. Presence in an unusual location—or if noticed in a contanier such as a backpack—should be treated as suspicious.

(U) Indicators of Pressure Cooker Devices

(U//FOUO) Terrorists can exploit the innocuous appearance and transportability of pressure cookers to conceal IED components. Pressure cookers can also be concealed in bags or other containers, offering few if any indicators of an impending attack. Alertness and quick reaction to the discovery of such concealment devices in unusual locations or cirumstances can improve chances of early detection and prevention of an attack. Potential indicators of a pressure cooker configured as an IED include:

— (U) Protruding wires or fuses;
— (U) Unusual smells such as chemical odors;
— (U) Unusual wetness or stains on a container; and
— (U) Apparent abandonment of a pressure cooker in a high traffic or otherwise strategic location.