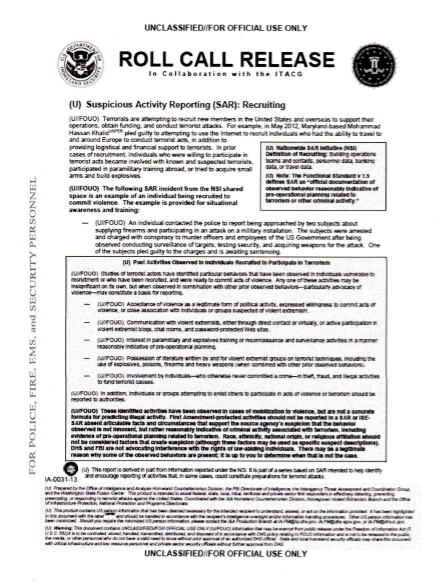 (U//FOUO) Terrorists are attempting to recruit new members in the United States and overseas to support their operations, obtain funding, and conduct terrorist attacks.  For example, in May 2012, Maryland-based Mohammad Hassan Khalid pled guilty to attempting to use the Internet to recruit individuals who had the ability to travel to and around Europe to conduct terrorist acts, in addition to providing logistical and financial support to terrorists.  In prior cases of recruitment, individuals who were willing to participate in terrorist acts became involved with known and suspected terrorists, participated in paramilitary training abroad, or tried to acquire small arms and build explosives.

(U//FOUO) The following SAR incident from the NSI shared space is an example of an individual being recruited to commit violence.  The example is provided for situational awareness and training:

— (U//FOUO) An individual contacted the police to report being approached by two subjects about supplying firearms and participating in an attack on a military installation.  The subjects were arrested and charged with conspiracy to murder officers and employees of the US Government after being observed conducting surveillance of targets, testing security, and acquiring weapons for the attack.  One of the subjects pled guilty to the charges and is awaiting sentencing.

(U) Past Activities Observed in Individuals Recruited to Participate in Terrorism

(U//FOUO) Studies of terrorist actors have identified particular behaviors that have been observed in individuals vulnerable to recruitment or who have been recruited, and were ready to commit acts of violence.  Any one of these activities may be insignificant on its own, but when observed in combination with other prior observed behaviors—particularly advocacy of violence—may constitute a basis for reporting.

— (U//FOUO) Acceptance of violence as a legitimate form of political activity, expressed willingness to commit acts of violence, or close association with individuals or groups suspected of violent extremism.

— (U//FOUO) Communication with violent extremists, either through direct contact or virtually, or active participation in violent extremist blogs, chat rooms, and password-protected websites.

— (U//FOUO) Interest in paramilitary and explosives training or reconnaissance and surveillance activities in a manner reasonably indicative of pre-operational planning.

— (U//FOUO) Possession of literature written by and for violent extremist groups on terrorist techniques, including use of explosives, poisons, firearms and heavy weapons (when combined with other prior observed behaviors).

(U//FOUO) In addition, individuals or groups attempting to enlist others to participate in acts of violence or terrorism should be reported to authorities.

(U//FOUO) These identified activities have been observed in cases of mobilization to violence, but are not a concrete formula for predicting illegal activity.  First Ammendment-protected activities should not be reported in a SAR or ISE-SAR absent articulable facts and circumstances that support the source agency’s suspicion that the behavior observed is not innocent, but rather reasonably indicative of criminal activity associated with terrorism, including evidence of pre-operational planning related to terrorism. Race, ethnicity, national origin, or religious affiliation should not be considered as factors that create suspicion (although these factors may be used in specific subject descriptions).  DHS and FBI are not advocating interference with the rights of law-abiding individuals.  There may be a legitimate reason why some of the observed behaviors are present; it is up to you to determine when that is not the case.