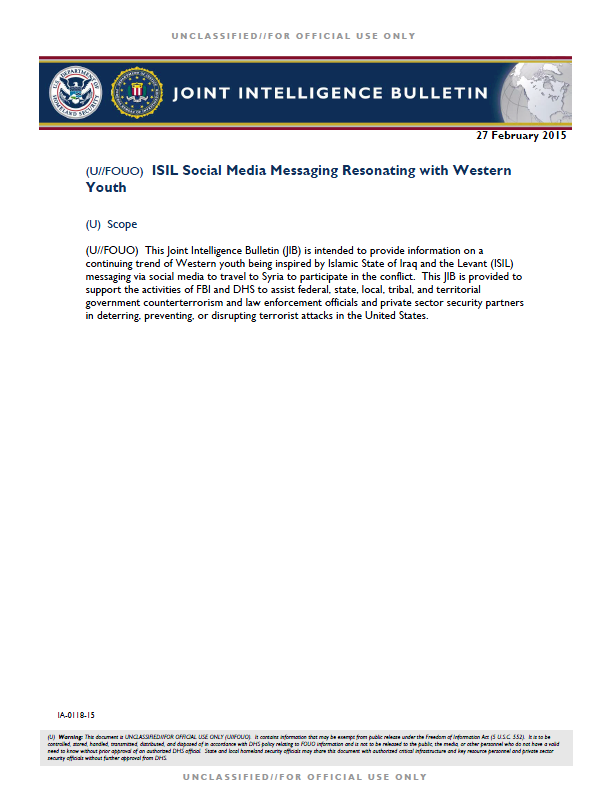 (U//FOUO) This Joint Intelligence Bulletin (JIB) is intended to provide information on a continuing trend of Western youth being inspired by Islamic State of Iraq and the Levant (ISIL) messaging via social media to travel to Syria to participate in the conflict. This JIB is provided to support the activities of FBI and DHS to assist federal, state, local, tribal, and territorial government counterterrorism and law enforcement officials and private sector security partners in deterring, preventing, or disrupting terrorist attacks in the United States.

(U//FOUO) The FBI and DHS assess ISIL and its supporters’ innovative use of social media and messaging has played a key role in motivating young Western males and females to travel to the Syrian conflict to join and support the self-declared Islamic State. Several recent instances demonstrate some youth are vulnerable to messaging from ISIL and its supporters that purports to offer them a cause to join or support, and depicts Syria and Iraq as desirable places to live. These incidents show that some Western youth are willing to connect over social media with like-minded persons, and have proven adept at obfuscating such social media usage from their parents and guardians.

» (U//FOUO) Some Western teenagers currently in Syria are known to have accessed violent extremist messaging for guidance on means and routes for traveling to Syria. Some of these teens, before travel, reportedly became increasingly active on chat rooms or online forums featuring discussion of how to join or support foreign fighters.

(U//FOUO) ISIL messaging has successfully influenced some US-based male youths to use social media in an attempt to radicalize others to violence, establish contact with like-minded individuals, and travel to Syria to join the group.

» (U//FOUO) A North Carolina-based male youth and a South Carolina–based male youth, in communication via various social media platforms, intended to travel together to Syria to join ISIL. If unable to travel to Syria, the youths intended to attempt an attack in the Homeland, targeting law enforcement. The South Carolina-based male youth participated in extensive weapons training in preparation for his planned travel to Syria. Both youths admitted to using social media to view violent extremist material online, and to actively recruiting like-minded individuals who supported ISIL and could assist them in their efforts to travel overseas.

(U//FOUO) Some Western female youths have demonstrated openness to messaging by ISIL, its supporters, and Syria-based foreign fighters, particularly when conveyed to them by established associates. The resonance of ISIL’s messaging with female youths is unprecedented and has prompted a number to attempt to travel to Syria. Although most females appear motivated to travel based on a desire to live in ISIL’s self-declared state instead of a desire to fight, this trend nonetheless represents ISIL’s broad appeal across demographic boundaries. Messaging from ISIL and its supporters emphasizes the roles women can play in helping to build ISIL’s self-declared state and the benefits of leaving behind life in the West.

» (U) Three UK-based female youths successfully boarded a flight to Turkey in mid-February 2015, allegedly to join ISIL in Syria. The youths may have been influenced by a mutual female associate who traveled to Syria in December 2014 and allegedly communicated online with a Syria-based, 20-year-old British woman prior to traveling, according to press reporting. The youths’ parents and teachers had no indication they were interested in participating in the Syria conflict illustrating the challenges local communities and law enforcement face in identifying prospective travelers who do not exhibit outward indicators of radicalization to violence.

(U//FOUO) The FBI and DHS assess that narratives propagated in ISIL’s English-language messaging efforts—particularly those that appeal to individuals’ desires to be part of a larger cause—likely are influencing Western teenagers to travel to join the group. Official ISIL messaging portraying the group’s combat successes and governance efforts probably has helped convince prospective Western travelers of the legitimacy of ISIL’s goals and the benefits of living in ISIL’s self-declared Caliphate. Furthermore, Western popular culture themes in ISIL and ISIL-affiliated foreign fighters’ messaging probably appeals to some youth, who view supporting ISIL as a form of rebellion.

(U//FOUO) The FBI and DHS further assess ISIL’s savvy use of media in both written and video form is likely appealing to many Western-based youth, particularly those who are already radicalized to violence. ISIL’s Western-focused messaging frequently features fluent English speakers, including Western youth, with whom audiences probably are able to relate. Additionally, ISIL has released several videos featuring high-tech filming and editing that have garnered widespread media attention, likely intensifying the appeal of these messaging efforts.

» (U//FOUO) ISIL videos sometimes feature youth from the West who left to join ISIL, including videos released in October and December 2014 featuring fighters from Australia, Canada, and the United Kingdom. Additionally, the use of fluent English and frequent references to current events help ISIL appear relevant to Western-based audiences. For example, a 9 February ISIL video featuring British hostage John Cantlie includes an interview of an unidentified French fighter who praises the January Paris attacks.

» (U//FOUO) ISIL’s videos, such as the video displaying a Jordanian pilot burning alive, often include dramatic shots and sound effects to further the viewer’s tension and interest. Additionally, the use of graphics and chronological layout of the information make some videos more like documentary films.

(U//FOUO) The FBI and DHS assess Western youth inspired by ISIL messaging to travel or attempt to travel to Syria could radicalize others, gain combat skills, share knowledge of potential targets, or mobilize to conduct organized or lone offender attacks upon their return to western countries, including the United States.* Recent cases of youth travelling or attempting to travel highlight the continued interest of US-based violent extremists in joining and supporting foreign terrorist organizations overseas to participate in fighting. Additionally, we remain concerned that ISIL’s violent extremist messaging with calls for lone offender and small group attacks may inspire other US and western-based violent extremists, who otherwise are unable to travel overseas, to conduct attacks in the Homeland.

(U//FOUO) We continue to urge federal, state, local, tribal, territorial, and private sector partners to be vigilant and report potential indications of pre-operational and suspicious activity.

(U) Indicators and Protective Measures

(U) Potential indications of youth preparing to travel to join foreign terrorist organizations or violent extremist groups in Syria are included below. Some of these activities may be constitutionally protected, and any determination of possible illicit intent must be supported by additional facts that justify reasonable suspicion. Any one of these activities may be insignificant on its own, but when observed in combination with other observed suspicious behaviors—particularly advocacy of violence—they may constitute a basis for reporting:

» (U//FOUO) New participation in weapons training or paramilitary exercises in preparation for engaging in violence abroad;

» (U//FOUO) Destroying computers and taking down social media profiles prior to travel to areas with known violent extremist activity;

» (U//FOUO) Giving away or selling worldly possessions, to include cars and electronics, in conjunction with an expressed desire to die fighting overseas;