(U//FOUO) DHS-FBI Bulletin: Use of Unsuspecting Civilians in IED Attacks 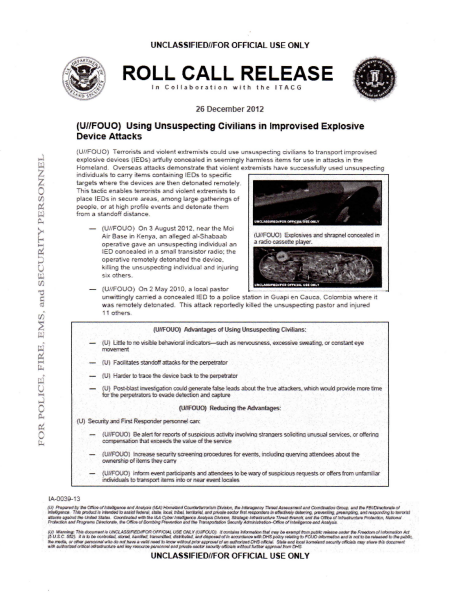 (U//FOUO) Terrorists and violent extremists could use unsuspecting civilians to transport improvised explosive devices (IEDs) artfully concealed in seemingly harmless items for use in attacks in the Homeland. Overseas attacks demonstrate that violent extremists have successfully used unsuspecting individuals to carry items containing IEDs to specific targets where the devices are then detonated remotely. This tactic enables terrorists and violent extremists to place IEDs in secure areas, among large gatherings of people, or at high profile events and detonate them from a standoff distance.

— (U//FOUO) On 2 May 2010, a local pastor unwittingly carried a concealed IED to a police station in Guapi en Cauca, Colombia where it was remotely detonated.  This attack reportedly killed the unsuspecting pastor and injured 11 others.

(U) Security and First Responder personnel can:

— (U//FOUO) Be alert for reports of suspicious activity involving strangers soliciting unusual services, or offering compensation that exceeds the value of the service
— (U//FOUO) Increase security screening procedures for events, including querying attendees about the ownership of items they carry
— (U//FOUO) Inform event participants and attendees to be wary of suspicious requests or offers from unfamiliar individuals to transport items into or near event locales