The following joint threat assessment was originally obtained and published by the New York Times. 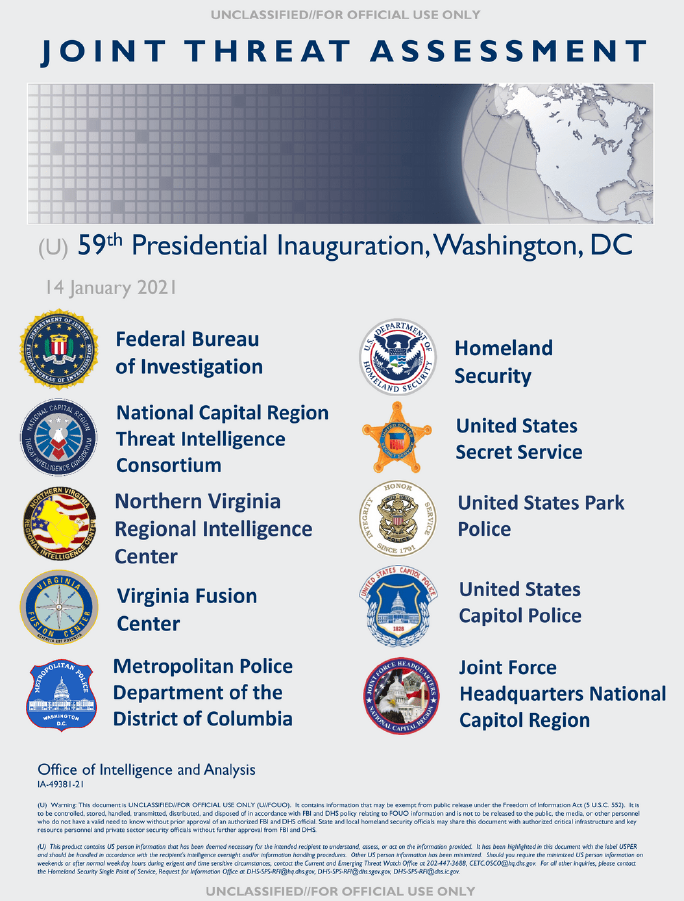 (U//FOUO) This Joint Threat Assessment (JTA) addresses threats to the 59th Presidential Inauguration taking place in Washington, DC, on 20 January 2021. This JTA is co-authored by the Federal Bureau of Investigation (FBI) and Department of Homeland Security (DHS)/US Secret Service (USSS), with input from multiple US Intelligence Community and law enforcement partners. It does not include acts of non – violent civil disobedience (i.e., protests without a permit), which are outside the scope of federal law enforcement jurisdiction.

(U//FOUO) This product is intended to support federal, state, local, tribal, and territorial government agencies and authorities in identifying priorities, as well as private sector security partners, for protective measures and support activity regarding terrorism and other existing or emerging threats to homeland security. Information in this assessment is current and accurate as of 14 January 2021.

(U//FOUO) As of 14 January 2021, the FBI, DHS, USSS, US Capitol Police (USCP), National Capital Region Threat Intelligence Consortium (NTIC), Joint Force Headquarters-National Capital Region (JFHQ-NCR), Virginia Fusion Center (VFC) and the Northern Virginia Regional Intelligence Center (NVRIC), Metropolitan Police Department of the District of Columbia (MPDC), and US Park Police (USPP) assess that domestic violent extremists (DVEs) pose the most likely threat to the 59th Presidential Inauguration in Washington, DC, on 20 January 2021 due to recent incidents of ideologically motivated violence , including at the US Capitol Building. In light of the storming of the US Capitol on 6 January, planned events in Washington, DC, in the lead up to and day of Inauguration Day offer continued opportunities for violence targeting public officials, government buildings, and federal and local law enforcement.

(U //FOUO) Additionally, unaffiliated lone offenders and homegrown violent extremists (HVEs remain a concern due to their ability to act with little to no warning, willingness to attack civilians and soft targets, and ability to inflict significant casualties with weapons that do not require specialized knowledge, access, or training.  Additionally, foreign terrorist organizations (FTOs) continue to express their intent related to attacking mass gatherings, landmarks, and critical infrastructure present in the National Capital Region (NCR).

(U//FOUO) We assess that DVEs pose the most likely threat to the Presidential Inauguration or associated events, particularly those who believe the incoming administration is illegitimate. Recent ideologically -motivated violence in Washington, DC, underscores the symbolic nature of the NCR and DVEs willingness to travel to events and violently engage law enforcement and their perceived adversaries. Recent violent interactions between law enforcement and DVEs at these events will likely exacerbate DVE grievances, particularly militia extremists. The known standing date of Inauguration Day conceivably offers DVEs more time to plan acts of violence and open source reports indicate calls to violent action ahead of or on Inauguration Day. In particular, we are concerned about racially or ethnically motivated violent extremists (RMVEs), anti-government or anti-authority violent extremists, specifically militia extremists, and anarchist extremists targeting the events or perceived ideological opponents.

(U//FOUO) Inauguration Day follows a series of events in 2020 and 2021 that have fueled plotting and attacks, including COVID-19-related lockdown measures, grievances surrounding policing and police brutality, and perceptions of the presidential election and its result. We assess that these plots and attacks highlight the persistent and lethal threat DVEs pose to soft targets, government officials, and law enforcement.

(U) According to ABC News reporting as of 23 October 2020, an militia extremist who self-described as a member of the “Boogaloo Bois” was charged with participating in a riot after they allegedly shot approximately 13 rounds from an AK-47 assault rifle into a Minneapolis, Minnesota Police Department building during the violence surrounding lawful protests following the death of George Floyd in late May 2020. The USPER allegedly exchanged messages with another individual who was involved in killing a Federal Protective Service (FPS) contract security guard Protective Security Officer (PSO) in Oakland, California in late May 2020. Two additional “ Boogaloo Bois” faced federal charges for their role in the Minneapolis riots.

(U) According to a federal criminal complaint, as of8 October 2020, alleged USPER individuals were arrested for planning to kidnap the Governor of Michigan prior to the November US presidential election. Group members, who included a Delaware resident, discussed the violent overthrow of certain government and law enforcement officials, to include multiple state governments they believed were violating the Constitution. In addition to making plans to kidnap the Michigan Governor, the group developed plans to attack the Michigan Capitol Building and planned to create a diversion for law enforcement during the kidnapping by demolishing a bridge. In addition, members of the group successfully detonated an IED wrapped with shrapnel to test its anti-personnel capabilities. The individuals were charged with making terrorist threats, material support for terrorist acts, gang membership, and firearms offenses.

(U//FOUO) Although we possess no specific, credible information indicating malicious actors have plans to use UASs to target the 59th Presidential Inauguration, we assess that unauthorized UAS operations can disrupt law enforcement operations, present a hazard to civilians around the event, or delay the event’s proceedings. While there are no indications of threats to the event from a UAS standpoint, the technology from the easily accessible commercial off-the-shelf UAS platforms continues to advance and become more affordable. Overseas media examples include actors employing UASs for nefarious purposes that could potentially inspire US-based individuals to employ such tactics.

(U//FOUO) Concerns of Violence and Criminal Activity During Lawful Protests

(U//FOUO) We remain concerned of potential violence directed toward public safety officials and bystanders due to observed violence surrounding lawful protests ongoing throughout the United States that began in May 2020 in Minneapolis, Minnesota, and Louisville, Kentucky. We assess that acts of violence and criminal activity can take place with little or no warning and be directed toward law enforcement officers, public property , and bystanders around the White House and the National Mall.

(U//FOUO) We have not identified any specific credible cyber threat to critical infrastructure supporting the upcoming Presidential Inauguration, nor a specific credible cyber threat to military or law enforcement personnel supporting the event. However, we note that it is relatively common to observe ideologically motivated cyber actors use high – profile events and symbolic targets to attempt to disrupt public and private sector networks, mainly as a means of elevating their ideology or message. We are unaware of DVE groups, which we assess pose the most likely physical threat to the inauguration, displaying cyber capabilities in the past that would be impactful to the event. Malicious cyber actors , unaffiliated with DVEs and potentially even including foreign adversaries, could also seize this period of Presidential transition to conduct disruptive cyber or influence operations for various purposes.