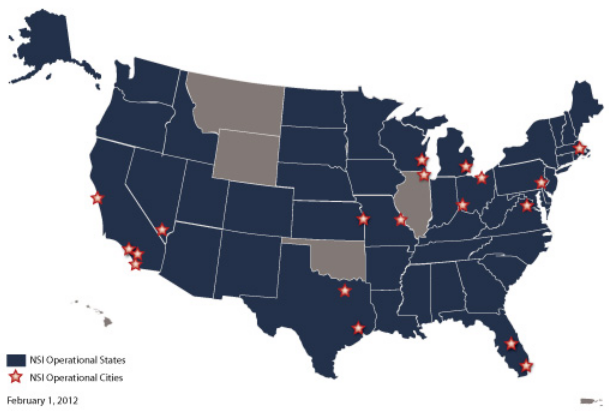 A map of operational cities and states using the Nationwide Suspicious Activity Reporting System (NSI). Information collected via the NSI was used to create a DHS-FBI bulletin warning of terrorists "eliciting information" from businesses and security personnel. Map via ncirc.gov

The Department of Homeland Security and Federal Bureau of Investigation are warning business owners and law enforcement personnel around the country to be on the look out for terrorists and criminals asking too many questions.  In a bulletin from last February, DHS and FBI warn that terrorists and criminals can exhibit the highly suspicious behavior of asking “pertinent, intrusive or probing questions” about security and operations at sensitive facilities.  According to the document, terrorists or criminals “may attempt to identify critical infrastructure vulnerabilities by eliciting information pertaining to operational and security procedures from security personnel, facility employees or their associates” and that this type of questioning by individuals “with no apparent need for the information” can provide an “early warning of a potential attack.”

What kind of questions go beyond simple conversation to full-fledged terrorist elicitation of information?  To illustrate the concept of “suspicious elicitation,” the bulletin includes examples of two incidents taken from actual suspicious activity reports provided under the Nationwide Suspicious Activity Reporting Initiative.  In one incident, a man working at a gas station asked a worker from a nearby chemical plant “what types of chemicals were used at the plant, whether any were explosive, and whether employees were allowed to take chemicals home.”  The gas station employee then asked about the explosiveness of certain chemicals and whether the plant was hiring. In another incident, a man asked a security officer at a train station about shift times and changes, where the security company was located and if security personnel worked after midnight.  The man also asked about security cameras at the location and asked for contact information for the security company.

DHS and FBI also include a helpful list of possible indicators of “suspicious elicitation” including “persons without a need to know seeking knowledge about evacuation procedures, response times and routes, and procedures used by emergency response personnel.”  Recipients of the bulletin are encouraged to report information on people asking about “policies or procedures that would provide insight into a facility’s operations.”  The bulletin defines the suspicious activity of “eliciting information” as “questioning individuals at a level beyond mere curiosity about particular facets of a facility’s or a building’s purpose, operations, security procedures, etc. that would arouse suspicion in a reasonable person.”

Another joint DHS-FBI bulletin from May of this year warns of similar attempts at “eliciting information” by criminals or terrorists. The bulletin encourages theater owners and organizers of mass gatherings to report individuals who ask about security procedures or “evacuation procedures.”