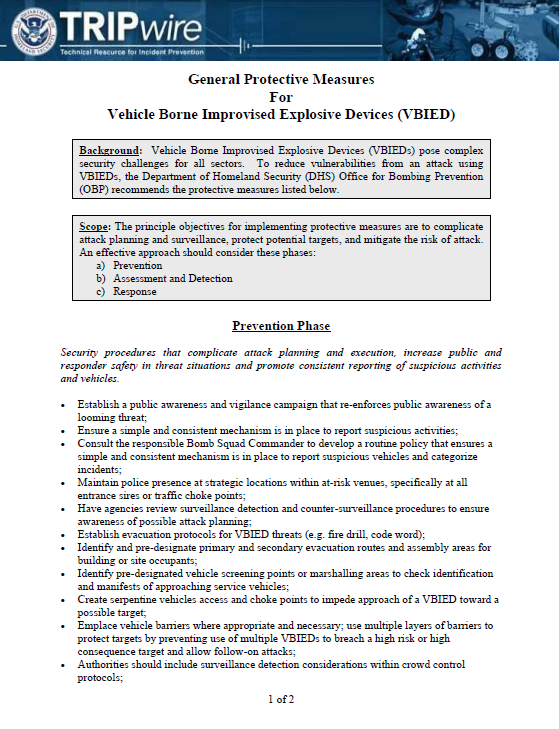 Scope: The principle objectives for implementing protective measures are to complicate attack planning and surveillance, protect potential targets, and mitigate the risk of attack. An effective approach should consider these phases:

b) Assessment and Detection

• Establish a public awareness and vigilance campaign that re-enforces public awareness of a looming threat;
• Ensure a simple and consistent mechanism is in place to report suspicious activities;
•  Consult the responsible Bomb Squad Commander to develop a routine policy that ensures a simple and consistent mechanism is in place to report suspicious vehicles and categorize incidents;
• Maintain police presence at strategic locations within at-risk venues, specifically at all entrance sires or traffic choke points;
• Have agencies review surveillance detection and counter-surveillance procedures to ensure awareness of possible attack planning;
• Establish evacuation protocols for VBIED threats (e.g. fire drill, code word);
• Identify and pre-designate primary and secondary evacuation routes and assembly areas for building or site occupants;
• Identify pre-designated vehicle screening points or marshalling areas to check identification and manifests of approaching service vehicles;
• Create serpentine vehicles access and choke points to impede approach of a VBIED toward a possible target;
• Emplace vehicle barriers where appropriate and necessary; use multiple layers of barriers to protect targets by preventing use of multiple VBIEDs to breach a high risk or high consequence target and allow follow-on attacks;
• Authorities should include surveillance detection considerations within crowd control protocols;
• Identify potential sources of bomb-making materials and precursor components for VBIEDs; develop awareness programs to inform point of sale employees when and how to alert authorities to suspicious purchases;
• Identify routine shipments and thefts of explosives or bomb-making materials to determine possible sources of VBIED and IED components;
• Identify potential locations which could be used as staging or assembly sites for VBIED and explosive materials;
• Inform service industry and hotel employees to be alert to indicators of attack planning activities such as maps, photographs, and communications equipment;
• Be alert for indications of and areas where explosive testing or attack rehearsals may occur;
• Query medical facilities for injuries involving suspicious chemical burns or injuries involving burns or blast effects, to include missing appendages;

Considerations in the assessment of vehicles to rule out potential threats or determine the need to request bomb squad response.
• Conduct random explosive detection canine searches to avoid taxing valuable resources; stagger search times and patterns to implement counter-surveillance measures;
• Canvas area to garner information and/or witness information to determine “who, what, when, where, and why” for an unattended vehicle left at site, in order to rule out legitimate deliveries, etc.;
• Review and identify local use-of-force policies that can be applied to challenge a potential suicide VBIED, should it be encountered;
• Determine if the vehicle driver is a proxy bomber (e.g. is the family being held hostage and can negotiations be attempted?); and
• Make approaches and negotiations by use of remote means.

• Conduct an evacuation of the area surrounding a vehicle which is a considered a threat, ensuring that the evacuation site selected is a considerable distance away to avoid blast and fragmentation; threat vehicles should not be moved until cleared by bomb squad personnel;
• Maintain vigilance to the possibility of a secondary device that may also be a VBIED; an additional device may be used to target an evacuation site or in command post areas used by the response community;
• Maintain awareness of possible remote initiation of a suicide VBIED, or a timer back-up should the VBIED fail to function; and
• Precautions should be taken to wear the appropriate Personnel Protective Equipment (PPE).