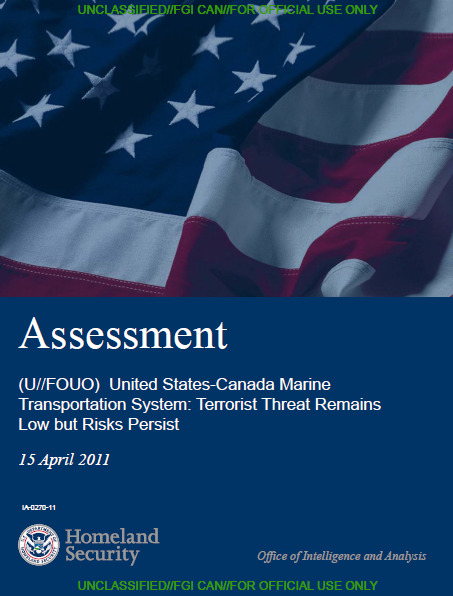 (//CAN U) This Assessment examines terrorist threats to the Marine Transportation System (MTS) relevant to the U.S. and Canadian maritime borders, and updates unclassified judgments from the 2007 Canadian Integrated Threat Assessment Centre (ITAC) product, “(//CAN U) Terrorist Threat to the Canadian Maritime Sector,” and the 2008 USCG Intelligence Coordination Center product, “(U//FOUO) National Maritime Terrorism Threat Assessment.” The information is provided in support of the activities of the Department and to assist federal, state, and local government counterterrorism and law enforcement officials in effectively deterring, preventing, preempting, or responding to maritime terrorist attacks against the United States and Canada.

(U//FOUO) While passenger vessels and terminals will likely remain potentially attractive targets for terrorist attacks, trends in overseas terrorist attacks and the lack of any reporting on maritime terrorist plots against the U.S.-Canada MTS suggests the threat to the majority of the system is low; violent extremists could attack U.S. and Canadian ferries and similar soft maritime targets with little or no warning.

— (U//FOUO) The capabilities of al-Qa‘ida and its sympathizers to conduct small boat waterborne improvised explosive device (WBIED) attacks against the U.S.-Canada MTS probably remain limited. When compared to other tactics, maritime attacks by al-Qa‘ida or its affiliates are rare and have only occurred in the Middle East and East Asia.† The transferability of this tactic to North America would be problematic given MTS governance and law enforcement that create a less permissive maritime environment.

— (U//FOUO) Terrorists probably would be reluctant to use containerized cargo to smuggle weapons of mass destruction (WMDs) into the United States or Canada because the loss of physical control of a valuable weapon would likely pose an unacceptable intervention risk. Nonetheless, this threat remains a low-probability, high impact scenario. We judge that terrorists would seriously consider other maritime means, such as small boats and bulk cargo shipments, to smuggle any available WMD or to conduct related waterside attacks in the United States or Canada if they had the opportunity. This judgment is primarily based on expert opinions from DHS officials, as well as assertions put forth by the Monterey Institute Center for Nonproliferation Studies and other academic or nongovernmental organizations.

(U//FOUO) Ferries and other passenger vessels remain vulnerable targets for terrorist attack. Although we have no credible reporting that any U.S. or Canadian ferry systems are the target of ongoing terrorist plotting, concerns are elevated because of the focus by al-Qa‘ida and its affiliates on attacking soft targets to cause mass casualties, the growth of internationally inspired and homegrown violent extremist (HVE) threats, and the paucity of preoperational indicators for ferry attacks. Moreover, terrorists might target ferries as a way to compensate for the increasing security measures protecting the aviation sector.

(U//FOUO) Past terrorist successes involving use of toxic industrial chemicals (TICs) in overseas conflicts may encourage attackers to attempt to weaponize large hazardous materials (HAZMAT) shipments moved in the MTS each day. Violent extremists have a limited ability to produce small improvised chemical weapons, but experimentation with these HAZMAT concoctions may eventually result in an evolutionary development of greater attack capabilities.

(U//FOUO) Terrorists and criminals almost certainly will continue their efforts to exploit the MTS to facilitate illegal entry of personnel or other criminal activities. Immigration and mariner document fraud, smuggling, and criminal activities along the waterfront require continuous law enforcement vigilance. Illicit actors may attempt to increase their circumvention of maritime security in North America because of enhanced land border security and air passenger screening.

(U//FOUO) Cyber attacks—regardless of motivation—will continue to represent only a marginal threat to automated ships and port facilities in North America, largely because of the complexity required for a successful attack. A paucity of information regarding such threats remains an enduring intelligence gap. Still, concerns related to maritime supply chain disruption perpetrated by disaffected employees or other insiders—particularly those with system administrator access—are the most frequently voiced by private sector security officials.

(U) MTS Overview and Vulnerabilities

— (U) Over 1.5 million passengers arrive in Canada annually, largely from the United States, and Canada’s ports handle a rapidly growing number of cruise ships.

— (U) Besides its ports, Canada also has 10 international ferry terminals, 19 interprovincial terminals, and nearly 300 intraprovincial terminals providing vital links both within and between the provinces. In 2008, Canada’s ferries carried more than 48 million passengers and approximately 18.3 million vehicles.

— (U//FOUO) According to TSA, more than 20,000 passenger vessels—including ferries, casinos, and harbor excursion vessels—carry more than 175 million passengers each year in U.S.-Canada waters.

(U//FOUO) The GLMTS is the heart of the U.S.-Canada MTS. The GLMTS is a vital binational waterborne transportation link for moving goods and people. The system encompasses the Saint Lawrence River and the five Great Lakes, and extends over 2,300 miles, encompassing eight states and two provinces with over 32 million citizens. The region produces 50 percent of all U.S. manufacturing output and two-thirds of Canada’s. This waterway is expected to increase in importance over this decade as both countries seek ways to ease highway and rail congestion, especially along North America’s east and west coasts and the midwest region.