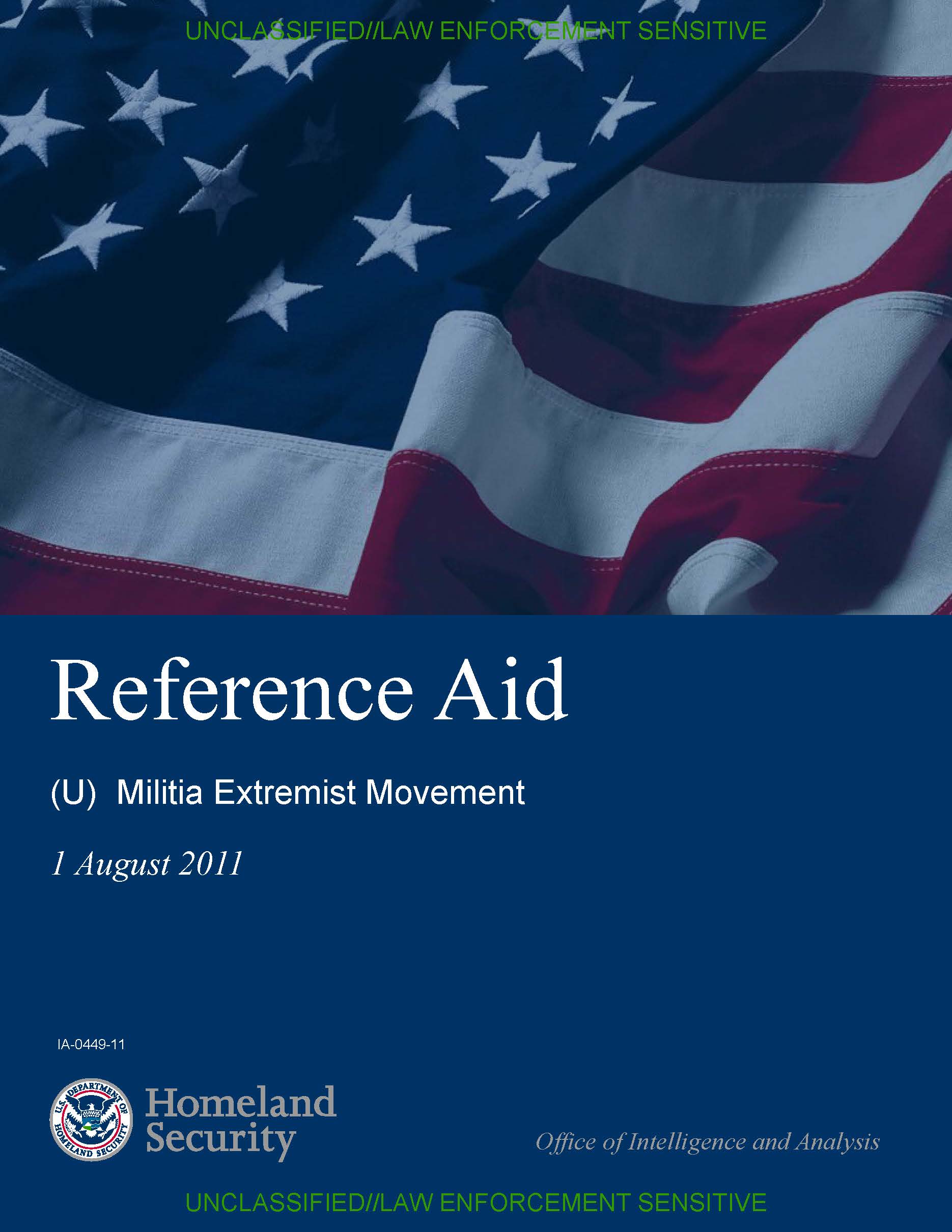 (U) Homeland Security Reference Aids, prepared by I&A, provide baseline information on a range of homeland security issues. This product is one in a series of reference aids on violent domestic and foreign extremist groups that assess the nature and scope of the threat they pose to the Homeland. This product is intended to support federal, state, local, and tribal agencies and authorities with responsibilities relating to homeland security to assist in the deterrence, prevention, preemption of, or response to terrorist attacks against the United States. To maintain timely and accurate intelligence, DHS encourages state and local law enforcement to respond with any updated information they may have concerning the status, composition, or activities of violent extremist groups in their jurisdictions.

(U//LES) The violent militia extremist movement peaked in membership in 1996 and then steadily declined due to negative publicity after it was erroneously linked to the Oklahoma City bombing and as a result of increased law enforcement scrutiny. After several years of significant decline in membership and violent criminal activity, the violent militia extremist movement has rebounded in the past few years as new groups have formed and new recruits have joined its ranks.

(U//FOUO) The militia movement in the United States formed circa 1994 in response to the perceived unwarranted and overzealous aggression of federal authorities at Ruby Ridge, Idaho in 1992 and Waco, Texas in 1993. The movement’s violent fringe element emerged shortly afterward. During the mid-to-late 1990s, several violent militia extremists were arrested and ultimately convicted of multiple plots to bomb federal buildings, military bases, highways, bridges, and other infrastructure in the United States. More recently, several violent militia extremists have been arrested for possessing illegal firearms and explosives and plotting to kill law  enforcement officers.

(U//FOUO) Factions within the larger militia movement and its violent fringe element often form, disband, or change names in short periods of time and are rife with internal turmoil stemming primarily from disagreements among leaders over missions, focus, and training. Militia members maintain the ability, however, to organize meetings and train within a particular militia group in their own state and to network with other militia groups in neighboring states. Despite the turmoil, some violent militia extremist groups and individuals have demonstrated the ability to instigate and support violence that targets government officials, institutions, and facilities in the United States.

(U) Ideology and Objectives

(U//FOUO) Violent militia extremists often combine their antigovernment beliefs with various conspiracy theories. Some tout the existence of a despotic “New World Order” (see text box) or cite apocalyptic or “end times” beliefs to support their outlook. Individuals within both the nonviolent elements of the militia movement and the more violent extremist minority profess that militias are the last line of defense in protecting US constitutional freedoms against a federal government that they see as increasingly eroding citizens’ personal rights, property rights, and the right to own firearms.

(U//FOUO) This conspiracy is described by militia members as a plot by a secret cabal of powerful individuals whose alleged goal is to create a one-world socialist government under the auspices of the United Nations. The US Government is seen as collaborating with the New World Order to strip Americans slowly of their freedoms in the takeover, which allegedly would involve establishing large numbers of detention camps for American dissidents.

(U//FOUO) Violent militia extremists have co-opted several common symbols that represent patriotism and a willingness to defend oneself against a tyrannical government. The most popular symbols include a Minuteman holding a rifle with the words “honor,” “defend,” and “liberty,” and the Gadsden Flag with the words “Don’t Tread on Me.” The Minuteman logo is a reference to the American colonial militia that battled British troops during the American Revolutionary War and symbolizes patriotism and militia successes during the war. The Gadsden Flag emerged as a symbol of the colonies in their fight against the British military during the American Revolutionary War. Both the Minuteman symbol and Gadsden Flag image are used widely outside the violent militia extremist movement, and the presence of these symbols alone does not necessarily indicate an association with a violent extremist militia.