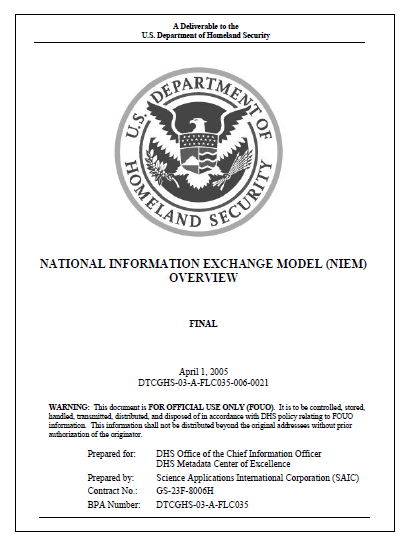 DHS and DOJ officials have announced a new partnership to provide leadership for enhanced development of the Global Justice XML Data Model as a base for the deployment of the National Information Exchange Model (NIEM). NIEM will provide enhanced capabilities for organizations to share data across federal, state, local and tribal lines. This paper gives an overview of the National Information Exchange Model (NIEM). It outlines the background, concepts, objectives and the development strategy for implementing NIEM.

The National Information Exchange Model (NIEM) is an interagency initiative to provide the foundation and building blocks for national-level interoperable information sharing and data exchange. The NIEM project was formally announced at the Global Justice XML Data Model (GJXDM) Executive Briefing on February 28, 2005. It is initiated as a joint venture between the U.S. Department of Homeland Security (DHS) and the Department of Justice (DOJ) with outreach to other departments and agencies. The base technology for the NIEM is the GJXDM. The NIEM will leverage both the extensive GJXDM reference model and the comprehensive GJXDM XML-based framework and support infrastructure.

Department of Justice started Global Justice XML Data Model by gathering approximately 16,000 data elements from 35 data dictionaries comprised of DOJ agencies as well as various local and state government sources. The developers removed the redundancies and duplications and resolved semantic differences. Currently, GJXDM consists of well-defined and organized vocabulary of 2,754 reusable components out of which there are 400 Complex Types, 150 Simple Types, and 2,209 Properties that facilitate the exchange and reuse of information from multiple sources and multiple applications. The Global model is rich, flexible and extensible, has effective governance mechanism, widespread recognition and is used by state and local agencies (see Exhibit 1). 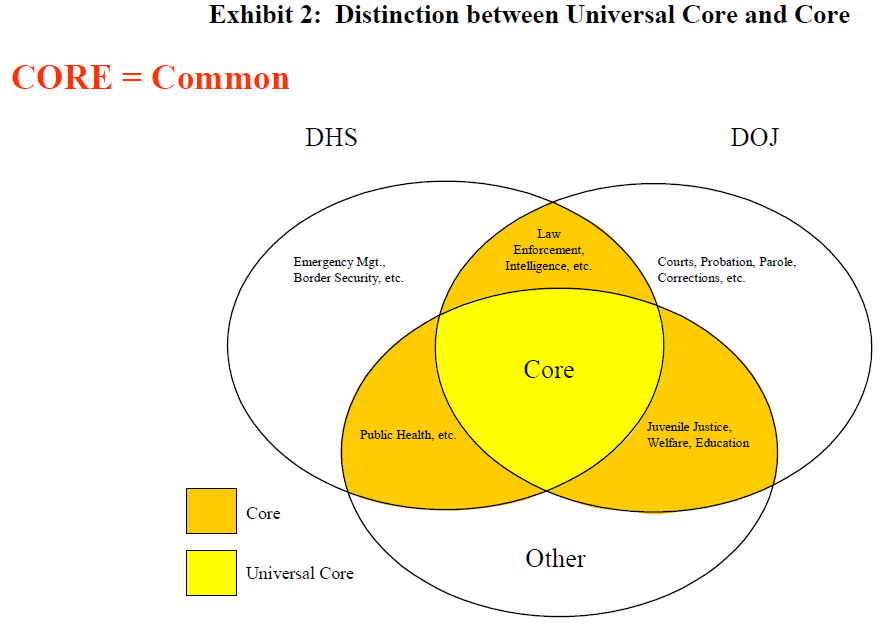