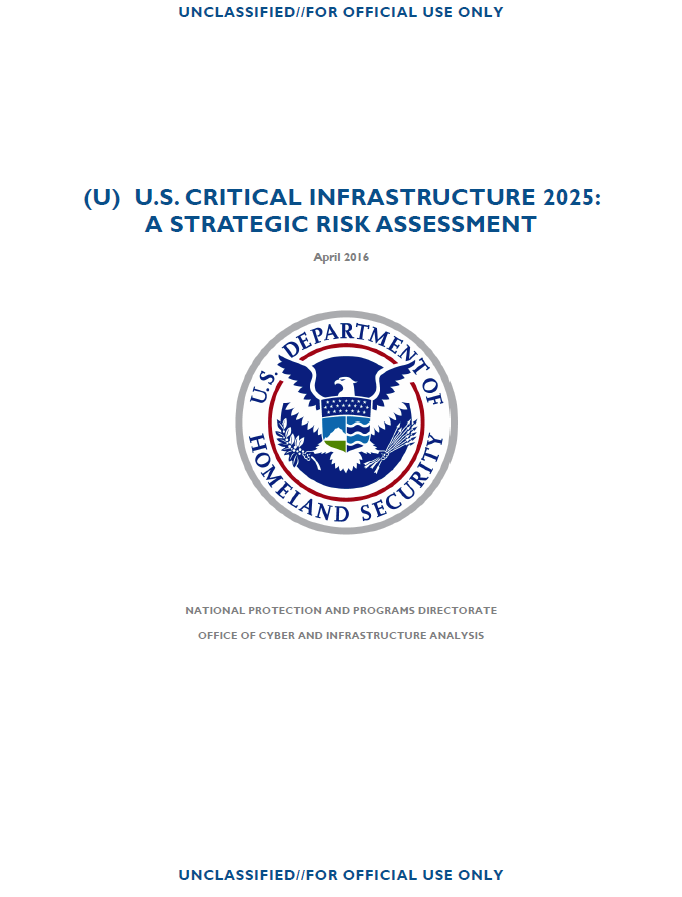 (U) U.S. critical infrastructure is the foundation on which the Nation’s economy, security, and health rely. Critical infrastructure sustains the American way of life and bolsters national competitiveness. It supplies industry and business with the means to sustain operational success, and it enables the United States to maintain influence in the global community. Infrastructure preserves a sound economy by keeping millions employed and inspires innovative technology to improve the welfare of Americans.

(U) The Nation’s infrastructure comprises 16 sectors. Most notable are the physical facilities that supply communities with goods and services like water, energy, transportation, and fuel. The Nation’s infrastructure also includes cyber technology that connects businesses; allows utilities to efficiently monitor energy supply and demand; and supports the critical infrastructure systems that ensure convenient access to funds in bank accounts, map the best route to a destination, and ensure an uninterrupted power supply. Ensuring the security and resilience of critical infrastructure is a national priority that requires planning and coordination across all levels of government and the private sector. Improving roads, bridges, water systems, electrical grids, and other vital infrastructure systems requires innovation, investment, and shared commitment.

(U) DHS/OCIA assesses that nefarious use of Non-Traditional Aviation Technology (NTAT) will increase during the next decade because of commercial availability, low cost, and easy operation. NTAT increases the capabilities of a malicious actor to exploit previously mitigated terrestrial attack vectors (e.g., walls, barriers, and checkpoints).

(U) DHS/OCIA assesses that terrorist organizations will continue to use the internal and social media platforms in evolving and dangerous ways. The recruitment and radicalization of individuals here in the United States will remain a priority for terrorist organizations, as will their targeting of critical infrastructure. Further, cyberterrorist capabilities are almost certain to become more sophisticated in the next 10 years; consequently, incidents of cyberterrorism are likely to increase during the next decade.

(U) DHS/OCIA assesses that a significant number of U.S. infrastructure assets are approaching the end of their designed life spans. Budget cuts across federal, state, and local governments limit the funding available for infrastructure inspections, maintenance, upgrades, and repairs. In some critical infrastructure sectors, a labor force shortage in the coming decades is likely to hamper efforts aimed at implementing and maintaining critical infrastructure upgrades. The risk of failure in the Transportation Systems, Energy, Water and Wastewater Systems, and Dams Sectors is highly likely to increase during the next 10 years.

(U) DHS/OCIA assesses that a possible increase in the frequency and severity of extreme weather events is likely to result in damage to critical infrastructure and could result in population shifts. Regions unaccustomed to extreme weather will become more susceptible and vulnerable to storm surges in the coming decades.

(U) DHS/OCIA assesses that the Healthcare and Public Health, Emergency Services, Transportation Systems, Water and Wastewater Systems, and Energy (Electrical Power) Sectors are most likely to be affected by a pandemic. All other critical infrastructure sectors are likely to be affected to some degree by the unavailability of personnel needed to maintain operations. The economic impact of a pandemic will depend on its severity and duration and mitigation efforts by federal, state, and local governments and the public. Estimates of loss in gross domestic product during the first year of a pandemic range from less than 1 percent in a mild pandemic up to 4.25 percent during a severe pandemic.