The following report was released by the Department of Homeland Security Office of Inspector General on September 13, 2013. 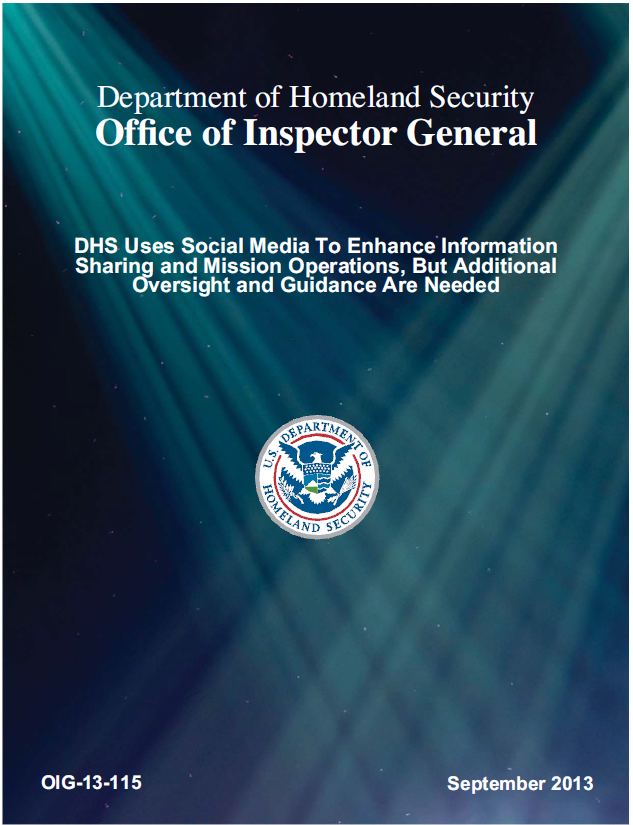 We audited the Department of Homeland Security’s (DHS) efforts to implement Web 2.0 technology, also known as social media. The objective of our audit was to determine the effectiveness of DHS’ and its components’ use of Web 2.0 technologies to facilitate information sharing and enhance mission operations. The scope and methodology of this audit are discussed further in appendix A.

Although DHS prohibits social media access to employees using a government-issued electronic device or computer unless a waiver or exception is granted, the Department has steadily increased its use of various social media sites over the past 5 years. Specifically, the Department and each of its seven operational components have established accounts on commonly used social media sites, such as Twitter, Facebook, blog sites, and YouTube, for outreach purposes. Public affairs employees have had wide success using these sites to share information and conduct public outreach efforts. These initiatives were effectively managed and administered by Department and component level public affairs offices. In addition, component public affairs offices have implemented policies and procedures to provide guidance to employees.

DHS and its operational components have recognized the value of using social media to gain situational awareness and support mission operations, including law enforcement and intelligence-gathering efforts. However, additional oversight and guidance are needed to ensure that employees use technologies appropriately. In addition, improvements are needed for centralized oversight to ensure that leadership is aware of how social media are being used and for better coordination to share best practices. Until improvements are made, the Department is hindered in its ability to assess all the benefits and risks of using social media to support mission operations.

The Department and its operational components have used social media tools to gain situational awareness and support mission operations, including law enforcement and intelligence-gathering efforts. Although social media sites have been beneficial for these activities, components did not have adequate guidelines or policies to prevent unauthorized or inappropriate uses of the technologies by employees. Recent efforts to establish privacy guidelines for operational uses of social media are progressing. However, additional component level policies and procedures are needed.

Social Media Tools Prove Useful for Increasing Situational Awareness The Department recognizes that social media sites are a valuable resource for maintaining timely, accurate, and actionable situational awareness of potential and actual incidents that may require a response. DHS officials told us that the Department benefits from the speed and early warning that come with monitoring social media in conjunction with traditional media. For example, the DHS National Operations Center (NOC) is the primary watch center for situational awareness and is responsible for providing a common operating picture and maintaining communications and coordination to prevent terrorist attacks and manage incidents. To do this, NOC personnel monitor media to discover and track incidents that may affect homeland security by using search terms to find items of potential interest across various websites and, starting in 2010, social media sites.26 For example, in 2012, NOC staff monitored Twitter for updates on a police search for a man with a gun on the University of Maryland Baltimore County campus. NOC staff also monitored the Twitter accounts of multiple news organizations in 2012 to obtain information on a suspicious letter sent to the Speaker of the U.S. House of Representatives. With this type of real-time information, staff can provide notification and guidance on safety measures and other actions that should be taken.

Social media has also enabled FEMA Watch Centers to develop more timely situational awareness to communicate information to emergency managers and government officials and improve incident management decision making. FEMA’s National Watch enter uses social media websites as an additional resource to maintain situational awareness of incidents that may require a coordinated Federal response. Watch Center personnel told us that they conduct searches to identify potential incidents that may predicate a coordinated Federal response. For example, the National Watch Center monitors social media during a storm to follow its progression and see how closely it matches the forecast and news reports. FEMA Watch Center staff also use this information to confirm the locations where weather events, such as tornado touchdowns, actually occurred.

USSS officials told us that they are able to gain information through social media to help prevent potential incidents. Specifically, USSS uses social media to identify potential threats to protectees and protected events. For example, at the Republican National Convention in August 2012, the USSS learned through social media that a particular individual who had threatened to disrupt the event was in the area and relayed relevant information about that individual to the Protective Intelligence Coordination Center for further action.

Insufficient Guidance for Operational Use of Social Media

Although the Department has seen benefits from using social media to support mission operations, some components did not have specific guidelines or documented policies to ensure the proper use of these tools for situational awareness, law enforcement, or intelligence activities.

Incidents of this nature led to the development of new departmental policies to ensure that DHS employees are aware of how social media technologies may be used for authorized activities. For example, in June 2012 the Department issued Directive 110-01, which established a formal privacy policy specifically for the operational use of social media to address access to and collection, use, maintenance, retention, disclosure, deletion, and destruction of PII. The Directive also solidified roles and responsibilities for the Chief Privacy Officer, component heads, and component privacy officers, among others.