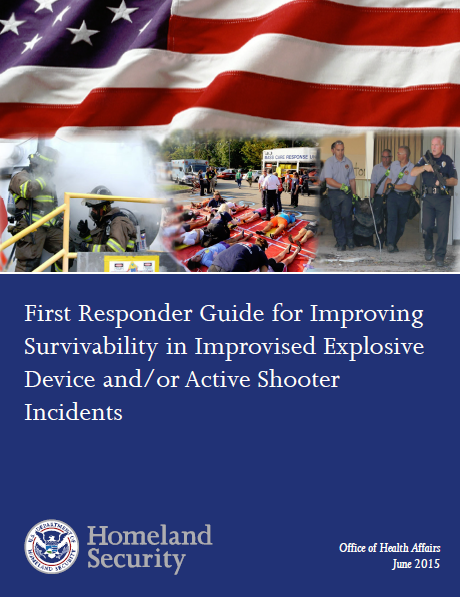 Recent improvised explosive device (IED) and active shooter incidents reveal that some traditional practices of first responders need to be realigned and enhanced to improve survivability of victims and the safety of first responders caring for them. This Federal, multi-disciplinary first responder guidance translates evidence-based response strategies from the U.S. military’s vast experience in responding to and managing casualties from IED and/or active shooter incidents and from its significant investment in combat casualty care research into the civilian first responder environment. Additionally, civilian best practices and lessons learned from similar incidents, both in the United States and abroad, are incorporated into this guidance. Recommendations developed in this paper fall into three general categories: hemorrhage control, protective equipment (which includes, but is not limited to, ballistic vests, helmets, and eyewear), and response and incident management.

3. First responders, when dealing with either IED or active shooter incidents, must remain vigilant and aware of the potential risk posed by secondary IEDs or additional shooters.

1. Local and state law enforcement and emergency services should institutionalize National Incident Management System (NIMS)-based command and control language through plans and exercises and during ongoing education and training.

5. There should be greater coordination among EMS, fire services, and law enforcement to work more effectively during IED and/or active shooter incidents. The dialogue should focus on potential improvements or changes to the TTPs which have historically been used during law enforcement situations that involve a medical emergency (e.g., EMS waits until law enforcement secures the scene before they enter to render emergency care).

The recommendations presented—early, aggressive hemorrhage control; use of body armor and a more integrated response; and greater first responder interoperability—will help to save lives by mitigating first responder risk and by improving the emergent and immediate medical management of casualties encountered during IED and/or active shooter incidents.

This section includes a list of scenarios and recommended medical and planning considerations. As the end-users of these scenarios, first responders are encouraged to incorporate details relevant to their local landmarks, response procedures, and practices. The purpose of the following scenarios is to guide first responder education and training efforts toward incorporation and institutionalization of the previous responder guidelines in a variety of likely IED and/or active shooter situations. These scenarios can be used individually as stand-alone resources, or they can be used in conjunction with the other scenarios provided. They are intended to be used for collaborative planning, training, and exercises with EMS, fire, and law enforcement resources together. Ideally, role playing should be done to help first responders better understand each other’s processes and roles and the importance of unified command and interoperability.

Large-scale attack using an IED with over 100 pounds net explosive weight, producing mass casualties with the likelihood of overwhelming the response and receiving infrastructure. This scenario may include vehicle-borne improvised explosive devices (VBIEDs).

EXAMPLE: You are called to the scene of a reported explosion at a train station (or other public location). Initial reports indicate that a truck drove around barriers and into the entrance of the facility and then detonated. 911 callers indicate that there are several dead and many others with multiple injuries—some extremely serious. You are the first arriving unit on the scene…

Secondary preventive measures include activities to prevent injuries once an explosion has occurred. Such measures may include barrier or structural walls that may protect or reduce injuries to bystanders and responders from blast and fragmentation injuries.xxi Secondary preventive measures also include use of ballistic protective equipment, although soft body armor and ceramic plate body armor may not protect against fragmentation or blast overpressure effects from IEDs. Most protective equipment is focused on ballistic protection and may have unproven or limited value for mitigating fragmentation or blast overpressure, particularly for devices with larger net explosive weights, such as vehicle bombs. For protective equipment and barriers to be effective, they must be implemented proactively; they are of little use when the explosive event is random and enacted on an unsuspecting, unprotected group of individuals. Ballistic protective equipment will also give some level of protection should an IED attack be combined with an active shooter event. Experience indicates attackers may plan to detonate secondary or subsequent IEDs that target first responders or receiving hospitals.

Maximize interoperability through existing MOUs/MOAs/SOPs, as well as through frequent exercises, planning, and training. These efforts will ultimately aid in reducing time from injury to treatment. During response, and while on the scene of the incident, use unified command with a mutual understanding of each responder’s role (EMS, fire, and law enforcement). Strive to communicate on common frequencies and use standardized terminology. Ensure all responders (regardless of discipline—EMS, fire, and law enforcement) are trained and equipped to provide early, aggressive hemorrhage control; use protective equipment (which includes ballistic vests, helmets, and eyewear); and use integrated response and incident management.