The following document was obtained from the Wildland Firefighters website. 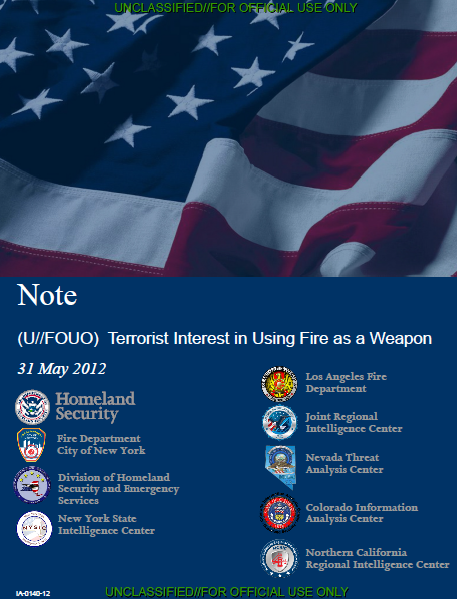 (U//FOUO) International terrorist groups and violent extremists have long shown interest in using fire as a weapon due to the low cost and limited technical expertise required, the potential for causing large-scale damage, and the low risk of apprehension. Recent encouragement of use of this tactic by terrorist groups and violent extremists in propaganda materials and extremist Web forums is directed at Western audiences and supports Homeland attacks.

— (U//FOUO) For terrorists, setting fires has several advantages over other methods of attack, including sustainability (duration of fire and long-term effects); the potential for casualties, economic damage, and wide media coverage; and the accompanying psychological effects of fear and terror.

— (U//FOUO) Recent posts to English-language violent extremist Web forums have encouraged individuals in the United States to start wildfires in the Homeland.

— (U//FOUO) The most recent edition of al-Qa‘ida in the Arabian Peninsula’s (AQAP’s) English-language Inspire magazine provides instructions for and advocates setting fires in the United States to destroy forests and buildings and cause mass casualties, economic damage, and fear.

(U//FOUO) The equipment and materials needed to use fire as a weapon are common and easily obtainable, making preoperational activities difficult to detect and plot disruption and apprehension challenging for law enforcement. A largescale fire, as we have seen in recent years, also has the potential to strain homeland security and public safety resources during response and recovery efforts.

(U//FOUO) Terrorists intent on using fire as a weapon may choose to target locations in proximity to populated areas or infrastructure to maximum damage and casualties.

(U//FOUO) Ongoing Terrorist Interest in Using Fire as a Weapon

(U//FOUO) For at least a decade, international terrorist groups and associated individuals have expressed interest in using fire as a tactic against the Homeland to cause economic loss, fear, resource depletion, and humanitarian hardship. There is no evidence that international terrorist groups and inspired individuals are responsible for any purposeful destruction of public or private property by setting wildfires in the United States. Using fire as a weapon, however, is inexpensive and requires limited technical expertise, giving it a strong advantage over other methods of attack. Statements advocating this tactic are most often found on violent extremist Web forums and in violent extremist propaganda.

— (U//FOUO) On 6 February 2012, a purported violent extremist posted a message entitled “The Top 100 Targets in the United States” that noted “pyroterrorism is perhaps the greatest threat America has ever faced,” as perpetrators run a low risk of detection. The posting urges “pyroterrorists” to start forest and grass fires randomly to cause economic damage.

— (U//FOUO) On 19 January 2012, a Palestinian violent extremist group posted a declaration of war on “America” on a prominent violent extremist Web forum and espoused setting forest fires as part of that effort. The posting falsely claimed credit for the Washoe Valley, Nevada forest fires of November 2011. As of 26 January, most follow-on thread postings were supportive of such arson attacks.

(U) Inspire Magazine Encourages Terrorist Use of Wildfires

(U//FOUO) The ninth issue of Inspire—AQAP’s English-language magazine published on 2 May 2012 as the winter 2012 edition—advocates setting wildfires in the United States to create economic hardship and cause the loss of life of firefighters, the destruction of property and buildings, and general psychological distress. The first issue of Inspire, which AQAP released in summer 2010, also briefly made reference to setting fires as a tactic. We have no indications AQAP or unaffiliated violent extremists are planning to act upon the suggestions contained in Inspire.

— (U//FOUO) The ninth issue includes detailed instructions and illustrations on assembling and using an improvised incendiary device (IID) referred to as an “ember bomb” to cause wildfires, as well as information on several ignition and timing mechanisms. It discusses the combustible characteristics of American pine forests and notes the optimal conditions for setting wildfires are strong winds and timber dryness. While Inspire provides a viable design created from common and easily obtainable materials, it could have a high failure rate when manufactured and utilized by untrained or inexperienced personnel.

— (U//FOUO) The ninth issue of Inspire also includes a four-page section entitled “The Ruling [sic] of Burning the Forests in the Land of the Kuffar Enemies,” which attempts to provide religious justification and legitimacy for setting fires, even if they cause civilian casualties.

— (U//FOUO) Montana and California are mentioned as ideal targets for wildfires; the issue cites destructive fires that occurred in these states in 2000 and 2009, respectively. In the adjacent map, taken from Inspire, the southwest is highlighted for its combustible features.

— (U//FOUO) In the first issue of Inspire, under the heading “O Muslims rise up in defense of your Messenger,” Westerners are encouraged to “[burn] down forests and buildings” as one way to harm the “enemy.”