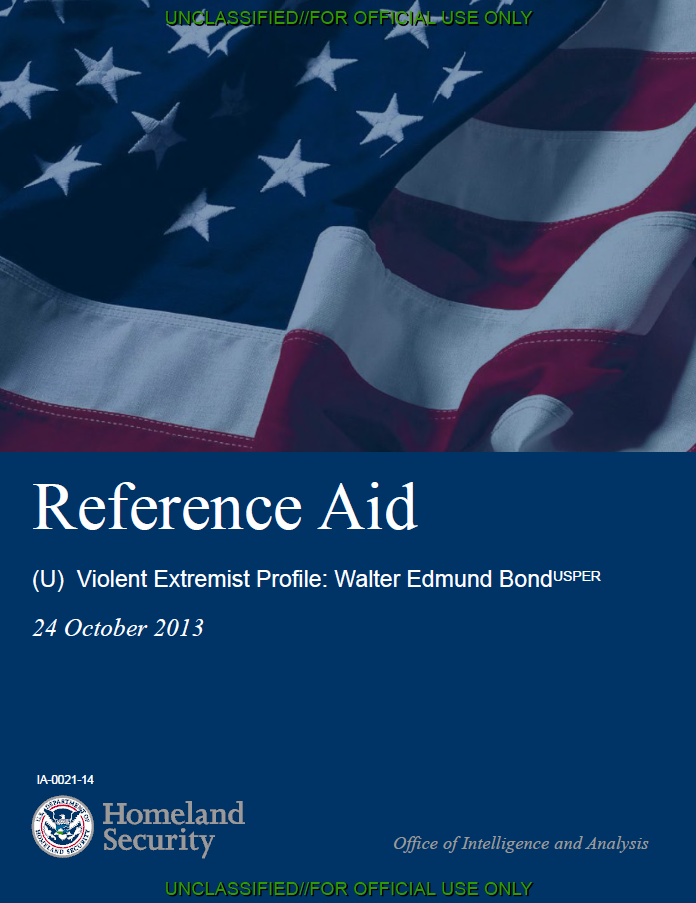 (U//FOUO) Walter Bond’s path to animal rights extremism was driven by witnessing what he perceived as animal abuse and by frustration stemming from his perception that lawful, nonviolent actions appeared to have little impact on advancing the goals of the animal rights movement.* Prior to becoming violent to advance animal rights, Bond showed a tendency to use violence to advance other beliefs, such as protesting illicit drug sales by committing arson against a drug trafficker’s home and protesting against religion by burning a pentagram symbol inside a church.

(U) Bond claimed that his childhood was marked by parental instability and substance abuse, which probably drove the development of his ardent positions against social ills, such as drug abuse. According to articles Bond wrote for a sympathetic website, he was born 16 April 1976 in Iowa; his parents divorced when he was one year old; and his mother raised him in Iowa and Colorado. Bond’s biological father raised his two older brothers in Iowa.

» (U) In a 2010 article, Bond wrote that his mother permitted drug use at an early age and his biological father was a drug addict. His adoptive father—albeit a “good man”—was an alcoholic. Bond claimed he was smoking marijuana with his mother by the time he was 12 years old.

» (U) Bond in the same article said his biological father was addicted to cocaine and amphetamines and was involved with outlaw motorcycle gangs. Bond wrote that his father was arrested in one of the biggest drug busts in Iowa and sent to federal prison in Yankton, South Dakota. Bond said he once visited his father in prison to meet him and described him as a “deadbeat dad, a liar and a scumbag.”

» (U) Bond earned his General Equivalency Diploma in prison, having dropped out of school in the eighth grade.

» (U) His mother remarried in 1984 but divorced two years later and Bond moved with his mother to Denver. Bond stated that when he was 18 years old, he came home one day, discovered the house empty, and learned that his mother had moved with her third husband to the Pacific Northwest. Bond wrote that he moved back to Iowa and did not see his mother again for seven years.

(U) In his late teenage years, Bond adopted Straight Edge beliefs in an apparent effort to deal with his childhood, abstaining from using alcohol, tobacco, and recreational drugs. While Bond attempted to promote his beliefs through lawful means—attending concerts to teach others in the audience how to stand up against the drug culture—he also came to use violence as a means to achieving his goals.

» (U) Based on Bond’s 2010 article and an anonymous interview with Bond in 2009, he became involved with the Straight Edge movement at 18 years old to rebel against his family’s alcoholism and drug use.

» (U) According to open source information, Bond was convicted in 1996 for lighting a pentagram on fire inside a church as a statement against religion.

» (U) The author of a book about animal rights who interviewed Bond in prison in 2010 reported that Bond admitted to conducting an arson attack in November 1997 at a suspected drug dealer’s home in Mason City, Iowa, which led to FBI finding nearly $1 million in drugs at the dealer’s home and to the arrest of 13 drug dealers in four US states. Bond claimed in a 2009 interview that attempting to confront the drug dealer and contacting police were ineffective, so he “decided to take the law into my own hands” and that “my four years imprisonment was a small price to pay for such a positive result.”

(U) As a young adult, Bond participated in the animal rights movement, promoting his beliefs largely through lawful activism, such as leafleting. Bond became a vegan and animal rights advocate after working in the construction industry building slaughterhouses in Iowa, according to a body of open source material. In a 2010 article, Bond reported that he would order pamphlets about vivisection, veganism, and factory farms and put them on windshields in parking lots and community bulletin boards.

(U//FOUO) As his involvement in the animal rights movement became more extreme, Bond came to view arson as a more effective means of advocating for animal rights than leafleting or writing a blog.

» (U) In October 2011, Bond pled guilty to setting fire to a leather factory in Salt Lake City, Utah in June 2010 and a restaurant in Sandy, Utah a month later. Bond stated to the court that his actions were justified because the businesses profited from animal abuse.

» (U) In November 2010, Bond pled guilty to setting fire to a sheepskin factory in Glendale, Colorado in April 2010. In a statement to the court, Bond reported that he set the fire to promote animal rights.

(U//FOUO) Bond’s turn to animal rights extremism was driven by a perceived ill-treatment of animals that led him to advocate for “total animal liberation.” According to an interview of Bond by an author of a book on animal rights, Bond’s experiences led him to advocate for the total exclusion of animals from human society—no pets, animal testing, or use of animals for food—and to support animal liberation “by any means necessary . . . so long as it’s not violent to any human or animal.”

» (U) In a 2010 article, Bond wrote that constructing slaughterhouses in Iowa as a teenager inspired him to become a vegan and an animal rights activist. Bond described a pivotal event at a slaughterhouse that left Bond “disgusted with myself . . . [and] . . . with humanity.” According to Bond, a hog was able to free itself from its foot hold but was chased down and beaten to death by three workers who cheered and high-fived each other after each strike.

(U//FOUO) Bond’s writings indicate that he came to believe activism by legal means was fruitless and that—as veganism and animal liberation became the focus of his life—he became tired of feeling ineffective, “like [he] was just wasting air and not getting enough of results in return. [He] started to drift more and more towards a militant mindset.”

» (U) In a 2010 article, Bond reported that after his release from prison for the arson attack on the drug dealer’s home, he began to view the Straight Edge community as more about being a “Christian, Right-wing American Patriot” or “wanna-be Beatnik, Bohemian anarchist” than about working towards animal liberation and a drug-free lifestyle.

(U//FOUO) There is no evidence that Bond joined a violent extremist group or associated with violent extremists in conducting his arson attacks. Bond spent much of his time with non-violent animal rights activists; the fact that those activists were not willing to engage in violence appears to have frustrated him. According to a 2010 article, “I had known and been around many different local activists and there was not one of them I would have considered up to the challenge.”

(U//FOUO) Based on his own claims, Bond’s personal experiences probably had the greatest impact on his radicalization to violence. He also claimed, however, to have been influenced by animal rights literature, some of which advocated violence.

» (U) The Globe GazetteUSPER in July 2010 reported that when Bond was arrested, he was carrying in his backpack literature titled, “The Declaration of War: Killing People to Save Animals and the Environment.” According to the Chicago TribuneUSPER, “The Declaration of War” is an anonymously authored book that advocates sending mail bombs to universities and killing trappers and hunters. Although apprehended in possession of this book, Bond appears to have made some efforts to avoid injuring people in his arson attacks.

» (U) In the interview with the author of a book on the animal liberation movement, Bond claimed he was influenced by Peter Singer’sUSPER book, Animal Liberation, which argues that animals should have rights based on their ability to feel pain and suffering, rather than based on intelligence. Although this text does not advocate the use of violence to achieve its ideological goals, Bond said the book reinforced his convictions on veganism and total animal liberation.

(U//FOUO) Bond’s choice in publications is a protected exercise of the freedom of speech under the First Amendment, and ownership of the cited documents is not inherently an indication of violent extremist intent. Nevertheless, because press reporting and his own writings indicate that he drew upon particular sources to justify his criminal activities, including acts of violence, we describe these influences to help understand his motivations.