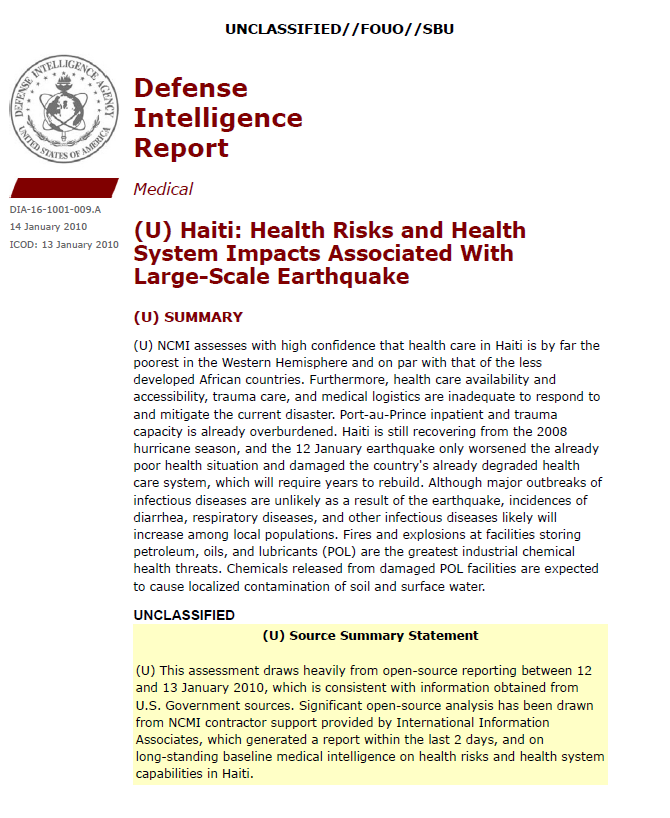 (U) NCMI assesses with high confidence that health care in Haiti is by far the poorest in the Western Hemisphere and on par with that of the less developed African countries. Furthermore, health care availability and accessibility, trauma care, and medical logistics are inadequate to respond to and mitigate the current disaster. Port-au-Prince inpatient and trauma capacity is already overburdened. Haiti is still recovering from the 2008 hurricane season, and the 12 January earthquake only worsened the already poor health situation and damaged the country’s already degraded health care system, which will require years to rebuild. Although major outbreaks of infectious diseases are unlikely as a result of the earthquake, incidences of diarrhea, respiratory diseases, and other infectious diseases likely will increase among local populations. Fires and explosions at facilities storing petroleum, oils, and lubricants (POL) are the greatest industrial chemical health threats. Chemicals released from damaged POL facilities are expected to cause localized contamination of soil and surface water.

(U) This assessment draws heavily from open-source reporting between 12
and 13 January 2010, which is consistent with information obtained from
U.S. Government sources. Significant open-source analysis has been drawn
from NCMI contractor support provided by International Information
Associates, which generated a report within the last 2 days, and on
long-standing baseline medical intelligence on health risks and health system
capabilities in Haiti.

(U) This product supports U.S. national foreign disaster response planning. This is NCMI’s
initial medical intelligence assessment of the condition of health care infrastructure, disease
potential, and environmental health impact of the earthquake that struck Haiti on 12 January
2010. NCMI will provide updates as information becomes available to make more detailed
assessments and forecasts.

(U) NCMI assesses with high confidence that health care in Haiti is by far the poorest in the
Western Hemisphere and on par with that of the less developed African countries.
Furthermore, health care availability and accessibility, trauma care, and medical logistics are
limited. Despite steps to improve disaster preparedness and limited reconstruction efforts,
Haiti will require years to rebuild its medical and supporting infrastructure, already degraded
by previous hurricane seasons. The 12 January earthquake exacerbated the country’s
problems, including nearly continuous reliance on foreign aid and medical assistance in
response to disasters. Many residents displaced by the 2008 hurricanes were still living in
shelters and tents when the earthquake struck.

• (U//SBU) According to a 13 January 2010 State Department situation report, all hospitals
in Port-au-Prince are filled to capacity and roads are impassable, making medical
evacuation difficult to impossible.

• (U) The Pan American Health Organization (PAHO) reports Eliazard Germain Hospital in
Petionville, a suburb of Port-au-Prince, and the Petit frères et Soeurs facility have
collapsed. 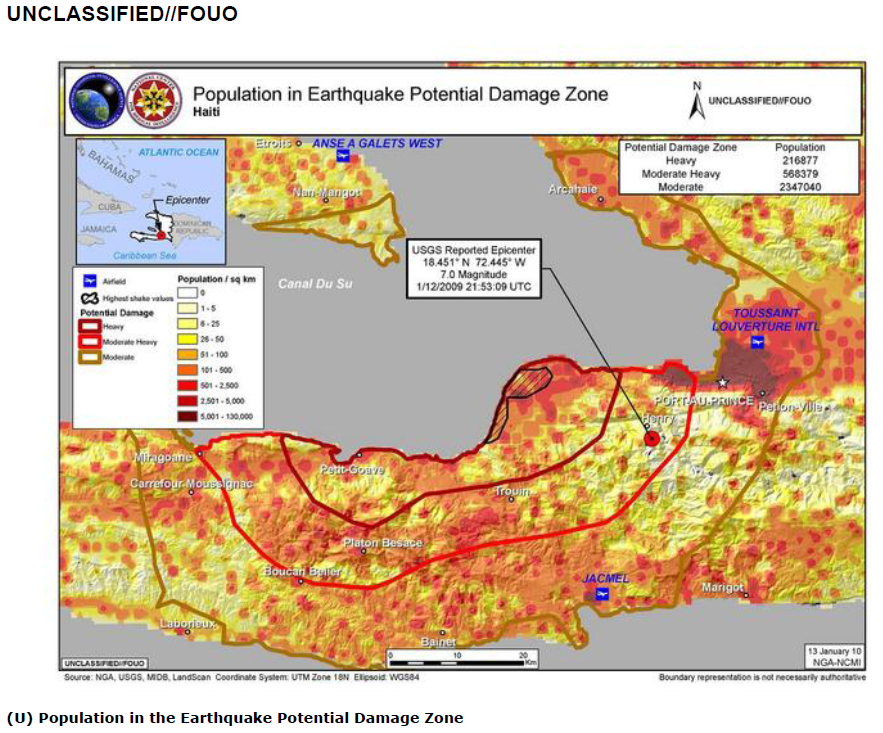 (U) Population in the Earthquake Potential Damage Zone

(U) NCMI expects damage to urban water and sewage infrastructure will increase rates of
diarrheal disease, possibly to include cholera, with the greatest impact on children under 5
years of age. If populations are crowded into temporary shelters, respiratory diseases
(including influenza and measles) likely will increase over the next several weeks. Although
historically severe epidemics have not followed after natural disasters, Haiti has the lowest
measles vaccination rate in the Western Hemisphere. Additionally, Haiti has an exceedingly
high rabies burden with human deaths reported each year. The currently high rates of dengue,
malaria, and other vector-borne diseases likely will remain unchanged.

(U) Until deployed assessment teams have established actual death and injury rates, we
believe analysis of a similar, previous earthquake in 2007 near Ica, Peru provides a rough
estimate of injuries and deaths for initial planning purposes. In that earthquake, a death rate
of 1/1,000 persons in the affected area and an injury rate of 29/1,000 persons were observed.

(U) NCMI judges unburied bodies of earthquake victims do not pose a significant infectious
disease threat to the local population or to U.S. personnel operating in the region. For additional information, see (U) Baseline Infectious Disease Risk Assessment: Haiti,
DI-1812-HTI-09, and (U) Indonesia Earthquake and Tsunamis: Bodies of Victims Pose Minimal
Disease Risk, DI-1812-724-04.

(U) NCMI assesses with high confidence that fires and explosions at facilities storing POL
products are the greatest industrial chemical threats within the earthquake-affected areas of
Haiti. Chemicals released from damaged industrial facilities are expected to cause localized
contamination of soil and surface water. NCMI judges damage to other industrial infrastructure
may also lead to chemical releases, causing contamination of food and water sources.

(U) OUTLOOK, IMPLICATIONS, AND OPPORTUNITIES

(U) NCMI judges Haiti will need continued humanitarian assistance and relief by the
international community for years to come as a result of the cumulative effects of this
earthquake and previous natural disasters over the last decade. NCMI also believes Haiti will
require further assistance every hurricane season in the foreseeable future. Future
assessments will include information regarding damaged medical infrastructure as well as
useable medical infrastructure.

(U) Beyond the immediate implications of humanitarian need, the compounded damage to the
health system could be one of several triggers, when combined under the right circumstances,
that lead to unrest and a potential for mass migration. The Department of Homeland Security
(DHS), Office of Intelligence and Analysis (I&A) assesses personnel who come in contact with
Haitians illegally migrating to the United States are at an increased risk of contracting
respiratory and bloodborne infectious diseases. We believe the possible importation of very
limited numbers of infectious disease cases represents a negligible risk to the United States.

(U) Once a rapid assessment of needs is complete, dispatching public health experts,
equipment, and supplies such as measles and tetanus toxoid vaccine to support displaced
persons camps may represent an opportunity to identify and reduce the impact of potential
outbreaks of infectious disease. Other immediate needs may include replacement blood
supplies and assistance with blood drives. Near- to mid-term (2-4 weeks), the ability to
intervene with a robust orthopedic, general, and to a lesser extent, dental/maxillofacial
surgical capability can serve to limit disability. In the long term, unimpeded degradation of the
health system compounds the potential triggers for a mass migration. Over the coming
decade, future health infrastructure development might be best focused on fostering
financially and materially sustainable reconstruction of facilities that are designed and
constructed to be hurricane and earthquake resistant in accordance with modern engineering,
as much of the existing infrastructure is vulnerable.