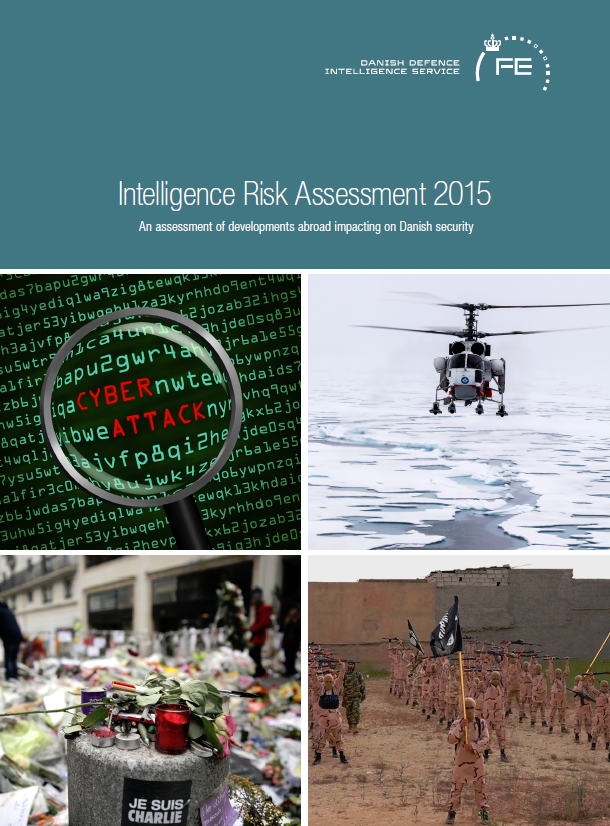 The DDIS Intelligence Risk Assessment gives an overview of our current intelligence-based assessments of developments in a number of countries and conflict areas and provides an outline of foreign policy issues that may impact on Denmark’s security.

This year’s Risk Assessment emphasizes the terrorist threat posed by militant Islamist groups, Russia’s attempt at repositioning itself as a great power, cyber espionage against businesses and public authorities, and the conflict-ridden and unstable situation in the Middle East and North Africa.

The analyses contained in this risk assessment are based on classified intelligence. The assessment is, however, unclassified and aimed at a wide audience, which limits the level of detail in analyses.

The DDIS Intelligence Risk Assessment is published annually, but we also continuously publish – mainly classified – assessments that form part of the complex process that enables Denmark to pursue its foreign, security and defence policy as a sovereign state in a world where threats are becoming increasingly complex. We believe that terrorism, Russia’s conduct and the extensive cyber espionage will continue to constitute the most serious risks to Denmark and Danish interests in the years to come. As a result, we monitor developments in these areas diligently.

Denmark and other Western countries are facing a serious terrorist threat. Over the past years, militant Islamist groups have gained ground in certain parts of Africa and the Middle East. The threat against the West primarily stems from individuals sympathizing with Islamic State in Iraq and the Levant (ISIL) and returned militant Islamists. The group of returned militant Islamists will likely grow in the years to come. ISIL’s and al-Qaida’s capacity to plan and launch large-scale and more complex attacks in the West is limited.

It is Russia’s ambition to restore its role as a great power with decisive influence on major international issues. In this context, Russia attempts to re-establish its dominant influence over the non-NATO member states in the post-Soviet space. Russia has demonstrated capability and willingness to use military means to achieve its strategic objectives. Russia continues to develop its armed forces, primarily for rapid deployment in local wars or conflicts along the Russian periphery. Russia is trying to sway the strategic balance in the Baltic Sea region by deterring NATO from increasing the alliance’s military presence in the Baltic countries. Within a few years, Russia will highly likely improve its capability to threaten NATO reinforcements to the Baltic countries in the event of a serious crisis. However, it is highly unlikely that Russia has the political intention to engage in a military confrontation with NATO and Denmark. Even so, Russia will remain a significant security challenge to the West, NATO and Denmark in the years to come.

Espionage against Danish state institutions and private businesses still constitutes the most serious cyber threat to Denmark and Danish interests. This type of espionage is mainly conducted by state and state-sponsored groups. In recent years, cyber espionage against Denmark has increased significantly, and the methods and techniques employed by the perpetrators have become increasingly sophisticated. The threat from cyber espionage against Danish authorities and companies is very high. In the long term, it is highly likely that more states will exploit the Internet for offensive purposes. Islamic State in Iraq and the Levant (ISIL) and its regional affiliates will exploit the instability and wars that will continue to characterize the Middle East in the short to medium term. Also, the conflicts will continue to generate pressure from refugees. ISIL and regional great powers Iran and Saudi Arabia contribute to exacerbating tensions between Sunnis and Shiites in local conflicts in the region.

The fight against ISIL will be enduring. In the medium term, ISIL will likely still control a belt of unbroken territory in the Sunni-dominated areas stretching across Syria and Iraq. Resistance against ISIL in Syria and Iraq will remain relatively weak and reliant on massive external assistance. The divide between the Iraqi communities will be counterproductive in the fight against ISIL, and much of the country will remain outside government control in the medium term. Iran will remain the dominant regional actor in Iraq in the short to medium term. There are no prospects of national reconciliation between Iraqi Shiites and Sunni Muslims.

There are no prospects that either of the parties to the Syrian civil war will be able to win by military means, and chances are slim that a politically negotiated solution will bring peace. Russia’s engagement in Syria will shift the balance of the conflict to Assad’s advantage but will not determine its outcome. Syria will be fraught with unrest and instability in the long term.

Russia’s political and military activities in the Arctic reflect the country’s idea of itself as a leading Arctic power. Russia continues to pursue a cooperative path, although a more challenging track in Russia’s Arctic policy is beginning to emerge. This will not replace the cooperative approach pursued by Russia in the Arctic for several years. It will, however, constitute a parallel track, which may at times come to dominate relations between Russia and the other Arctic states. In addition, in recent years, Russia has initiated a military build-up in the Arctic aimed at ensuring control of the North East Passage and protecting Russia’s northern areas against military threats. The military build-up and activity are militarily defensive, but at the same time politically offensive. Over the past few years, China’s ambition for access to natural resources outside China has sparked increased Chinese interests in the Arctic, including Greenland.

China is pursuing an increasingly confident and ambitious foreign policy aimed primarily at strengthening China’s economic and political clout in the Asia-Pacific region. Because of this, regional competition between China and the United States will intensify, and tensions between China and Russia are also likely to increase.

Based on the Iran nuclear agreement, it is highly unlikely that Iran will be capable of developing nuclear weapons undetected in the long term. North Korea is still expanding its capabilities to produce weapons of mass destruction. North Korea is likely willing to spread this capability to other countries.

The economic growth and increased investments from Western and non-Western countries seen in numerous African countries over the past few years will continue in the short to medium term. However, weak state structures, poverty and conflicts will characterize developments in the continent and trigger pressure from refugees and migrants along with widespread smuggling activities, including human, drug and arms trafficking. The threat from militant Islamist groups will remain a destabilizing factor in several countries and regions.

The Somali-based pirates have ceased their activities, and it is highly unlikely that they will try to resume attacks on civilian shipping in the short term. No collaboration exists between the Somali-based pirates and al-Shabaab. The pirates will remain a serious threat in some parts of the Gulf of Guinea. In the short to medium term, it is less likely that the littoral states will prove capable of defeating piracy. In addition, it is less likely that Boko Haram will participate in piracy activities in short term.