The following graphical training aid was released by the DoD in November 2001 following the terrorist attacks of September 11, 2011. 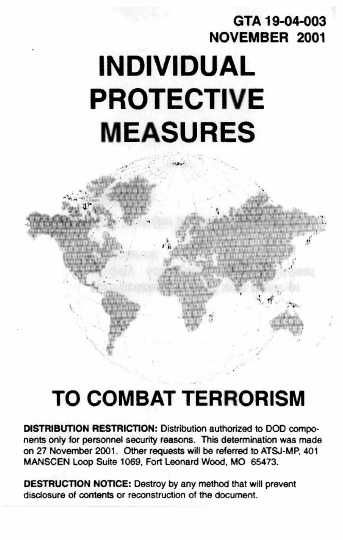 On 11 September 2001, as the world watched in horror, three commercial airliners were hijacked and used as weapons of mass destruction in New York City and Washington, DC. A fourth attempt was apparently thwarted by passenger intervention before the plane crashed in Pennsylvania. These events will forever change the free world’s philosophy and approach to terrorist incidents. The extent of the impact of these acts on our personal lives is yet to be determined, but it is certain to be profound. For example, in the case of a plane being hijacked, it may be prudent and desirable for individuals and groups to intervene and attempt to overpower terrorists/criminals when the circumstances dictate. These actions are contrary to the guidelines contained in this document, but reflect the extent to which the events of 11 September 2001 have changed the rules. For most situations, however, the information and recommendations contained in this pamphlet present viable solutions to a problem that is not likely to go away.

Department of the Army personnel and their families are the symbols of the power and prestige of America. Americans are particularly vulnerable to a terrorist attack. We are stationed on seven continents, we are generally highly visible, and our work, is deeply despised by militants and extremists the world over.

This pamphlet is designed to foster your awareness of the terrorist threat, to provide techniques for you to actively protect yourself and your family, and to help ensure the process of changing our mindset from complacency to constant vigilance. It is intended to serve as a guide, and you should incorporate the measures that apply to you and your family.

Your dress, conduct, and mannerisms should not attract attention. Make an effort to blend into the local environment. Avoid publicity, and do not go out in large groups. Stay away from civil disturbances and demonstrations.

Vary your route to and from work, and vary the time you leave and return home. Vary the way you dress. Do not exercise alone. Do not exercise at the same time and place each day, on deserted streets, or on” country roads. Let people close to you know where you are going, what you will be doing, and when you should be back.

Watch for anything suspicious or out of place. Do not give personal information over the telephone. If you think you are being followed, go to a preselected, secure area. Immediately report the incident to your force protection unit advisor, military intelligence officer, military police, or law enforcement agencies. In overseas areas without these agencies, report the incident to the security officer or the military attache at the US Embassy.