DoD Report: Countering Extremist Activity Within the Department of Defense

The following report was released December 20, 2021 by the Department of Defense. 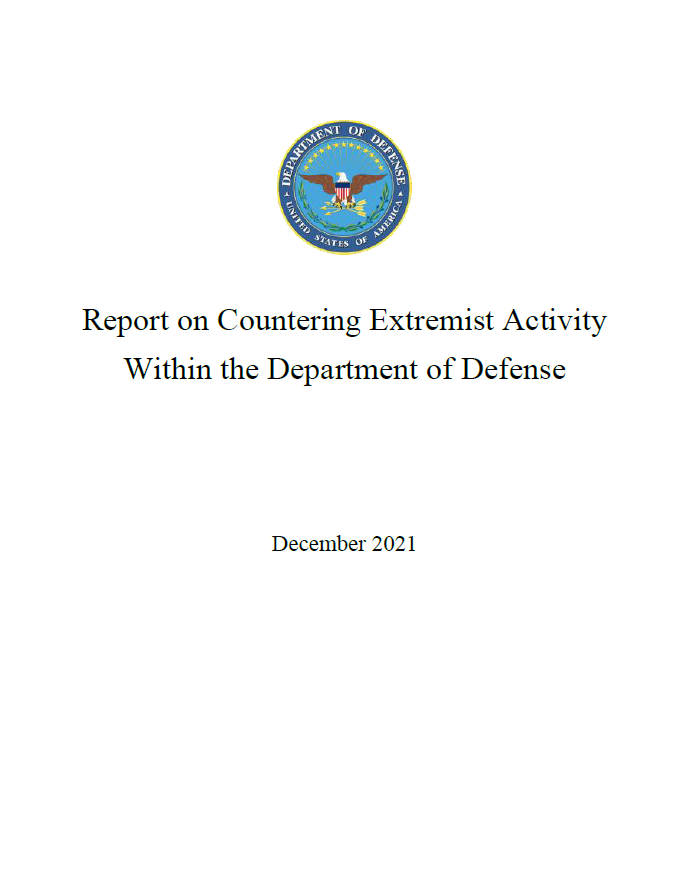 Report on Countering Extremist Activity Within the Department of Defense

Following a number of high-profile insider threat attacks in the early 2010s, the Department of Defense built a program to detect, deter, and mitigate such threats to the Department, its people, and its mission. In 2019, Congress directed the Department of Defense to review existing policies and capabilities with the aim of closing gaps in personnel security vetting. In 2020, the Army published a comprehensive revision of Army Command Policy (AR 600-20) which was the first of its kind to address the use of social media to support extremist activities and provided guidance to commanders for addressing prohibited activity that crosses the line into misconduct.

In February 2021, Secretary of Defense Lloyd J. Austin III directed a Department-wide stand down to educate Department of Defense personnel on the threat posed by extremist activity. In April 2021, following the stand down, Secretary Austin issued a second memorandum to implement immediate actions identified by subject-matter experts within the Department of Defense (and informed by the stand down), and directed the establishment of the Countering Extremist Activity Working Group (CEAWG) to implement these urgent steps and develop additional recommendations.

This report provides background on the work completed by the Department. It also details the implementation status of the Secretary’s four directed actions from April and describes the six additional recommendations and associated actions developed by the CEAWG. With the publication of this report, the Secretary of Defense has directed the implementation of the six CEAWG recommendations and associated actions.

The immediate actions were:

Review and update DoD Instruction 1325.06, “Handling Protest, Extremist, and Criminal Gang Activities Among Members of the Armed Forces,” to clarify the definition of prohibited extremist activity

Commission a study on extremist activity in the Total Force.

(a) Advocating or engaging in unlawful force, unlawful violence, or other illegal means to deprive individuals of their rights under the United States Constitution or the laws of the United States, including those of any State, Commonwealth, Territory, or the District of Columbia, or any political subdivision thereof.

(b) Advocating or engaging in unlawful force or violence to achieve goals that are political, religious, discriminatory, or ideological in nature.

(c) Advocating, engaging in, or supporting terrorism, within the United States or abroad.

(d) Advocating, engaging in, or supporting the overthrow of the government of the United States, or any political subdivision thereof, including that of any State, Commonwealth, Territory, or the District of Columbia, by force or violence; or seeking to alter the form of these governments by unconstitutional or other unlawful means (e.g., sedition).

(e) Advocating or encouraging military, civilian, or contractor personnel within the DoD or United States Coast Guard to violate the laws of the United States, or any political subdivision thereof, including those of any State, Commonwealth, Territory, or the District of Columbia, or to disobey lawful orders or regulations, for the purpose of disrupting military activities (e,g., subversion), or personally undertaking the same.

(2) Active Participation. For purposes of this section, the term “active participation” means the following, except where such activity is within the scope of an official duty (e.g., intelligence or law enforcement operations):

(a) Advocating or engaging in the use or threat of unlawful force or violence in support of extremist activities.

(b) Advocating for, or providing material support or resources to, individuals or organizations that promote or threaten the unlawful use of force or violence in support of extremist activities, with the intent to support such promotion or threats.

(c) Knowingly communicating information that compromises the operational security of any military organization or mission, in support of extremist activities.

(d) Recruiting or training others to engage in extremist activities.

(e) Fundraising for, or making personal contributions through donations of any kind (including but not limited to the solicitation, collection, or payment of fees or dues) to, a group or organization that engages in extremist activities, with the intent to support those activities.

(f) Creating, organizing, or taking a leadership role in a group or organization that engages in or advocates for extremist activities, with knowledge of those activities.

(g) Actively demonstrating or rallying in support of extremist activities (but not merely observing such demonstrations or rallies as a spectator).

(1) When the nature of the meeting or activity constitutes a breach of law and order;

(2) When a reasonable person would determine the meeting or activity is likely to result in violence; or

(3) In violation of off-limits sanctions or other lawful orders.

(i) Distributing literature or other promotional materials, on or off a military installation, the primary purpose and content of which is to advocate for extremist activities, with the intent to promote that advocacy.

(n) Knowingly taking any other action in support of, or engaging in, extremist activities, when such conduct is prejudicial to good order and discipline or is service-discrediting.