The following is part of a series of documents related to the Department of Defense's Complex Catastrophes Initiative. 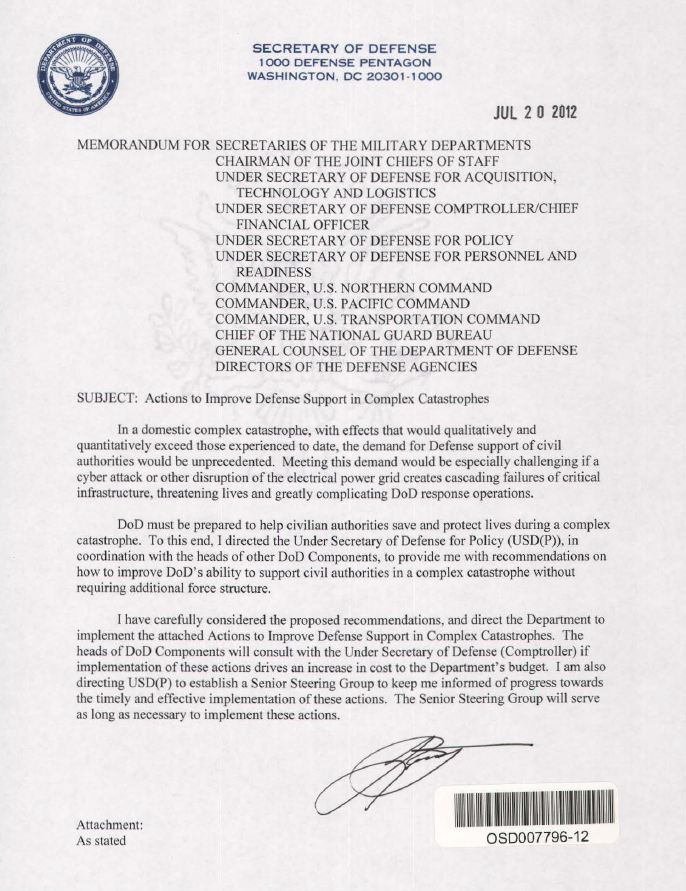 In a domestic complex catastrophe, with effects that would qualitatively and quantitatively exceed those experienced to date, the demand for Defense support of civil authorities would be unprecedented. Meeting this demand would be especially challenging if a cyber attack or other disruption of the electrical power grid creates cascading failures of critical infrastructure, threatening lives and greatly complicating DoD response operations.

DoD must be prepared to help civilian authorities save and protect lives during a complex catastrophe. To this end, I directed the Under Secretary of Defense for Policy (USD(P)), in coordination with the heads of other DoD Components, to provide me with recommendations on how to improve DoD’s ability to support civil authorities in a complex catastrophe without requiring additional force structure.

I have carefully considered the proposed recommendations, and direct the Department to implement the attached Actions to Improve Defense Support in Complex Catastrophes. The heads of DoD Components will consult with the Under Secretary of Defense (Comptroller) if implementation of these actions drives an increase in cost to the Department’s budget. I am also directing USD(P) to establish a Senior Steering Group to keep me informed of progress towards the timely and effective implementation of these actions. The Senior Steering Group will serve as long as necessary to implement these actions.

PART I: LEVERAGE A BROADER RANGE OF DOD FORCES AND CAPABILITIES

la. Finalize Definition of Complex Catastrophe: By August 1, 2012, the Under Secretary of Defense for Policy, in coordination with the Chairman of the Joint Chiefs of Staff, shall define the term “complex catastrophe.” This definition shall I) represent an event that is of strategic consequence to the Nation, with potentially wide-spread effects that will inhibit the response itself, such as (but not limited to), the consequences of a cyber attack on the electric power grid and the cascading effects on other critical infrastructure sectors; 2) reflect the strategic assumption, consistent with existing guidance, that the magnitude of prevention, consequence management and mitigation requirements in a catastrophic incident may temporarily exceed civil authorities’ capabilities to respond- potentially from the outset; and 3) outline decision criteria and triggering thresholds to determine when a complex catastrophe has occurred.

lb. Use Interim Definition: Until DoD finalizes a definition of complex catastrophes, the Department will use the definition of a “catastrophic event” provided by Joint Publication  (JP) 1-02, DoD Dictionary of Military and Associated Terms. JP 1-02 defines a catastrophic event as “any natural or man-made incident, including terrorism, which results in extraordinary levels of mass casualties, damage, or disruption severely affecting the population, infrastructure, environment, economy, national morale, and/or government functions.”

3a. Publish Interim Guidance for Installation Commanders and Other DoD Officials to Provide Immediate Response Assistance for Complex Catastrophes: By January 31, 2013, the Under Secretary of Defense for Policy, in coordination with the Under Secretary of Defense for Acquisition, Technology, and Logistics; the Secretaries of the Military Departments; and the Chairman ofthe Joint Chiefs of Staff, shall review and, if necessary, amend existing policy and guidance to enhance DoD officials’ ability to use the immediate response authority described in DoD Directive 3025.18 for complex catastrophes, including by clarifying time and geographic limitations pertaining to DoD officials’ exercise of the immediate response authority. Specifically, the Under Secretary of Defense for Policy shall:

i. Clarify policy guidance to address the geographic scope and duration of immediate response for installation commanders and other DoD officials to employ capabilities to save and sustain lives, including events involving large-scale disruption of the power grid and other critical infrastructure;

ii. Provide policy guidance for Defense Coordinating Officers and Emergency Preparedness Liaison Officers to coordinate information about Military Service lifesaving and life-sustaining capabilities that could be made available during a complex catastrophe under immediate response authority; and

iii. Provide policy guidance for DoD officials to coordinate a request for immediate response assistance, at a minimum, with the Installation Emergency Management Working Group.

3b. Publish Final Guidance for DoD Officials to Conduct Immediate Response based upon Combatant Commander Planning and Assessment: By September 30,2013, the Under Secretaries of Defense for Policy and Acquisition, Technology, and Logistics, in coordination with the Chairman of the Joint Chiefs of Staff, shall replace, or as appropriate obtain approval of, the interim guidance with final, comprehensive policies and procedures for improving the ability of DoD officials to provide DoD capabilities using immediate response authority, including, but not limited to, revisions ofDoDD 3025.18, Defense Support ofCivil Authorities, DoDI 3025.16, Defense Emergency Preparedness Liaison Officer Programs, and DoDI 6055.17, Installation Emergency Management Programs.