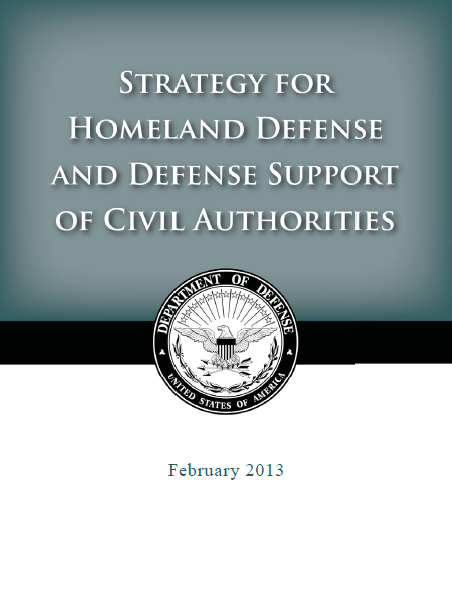 Defending U.S. territory and the people of the United States is the highest priority of the Department of Defense (DoD), and providing appropriate defense support of civil authorities (DSCA) is one of the Department’s primary missions. This Strategy for Homeland Defense and Defense Support of Civil Authorities orients the Department towards an increasingly complex strategic environment. It emphasizes innovative approaches, greater integration, deepening of external partnerships, and increased effectiveness and efficiencies in DoD’s homeland activities. It applies the vital capabilities of the Total Force – in the Active and Reserve Components – to make the nation more secure and resilient. Finally, the Strategy guides future decisions on homeland defense and civil support issues consistent with the Defense Strategic Guidance and the Quadrennial Defense Review (QDR).

This Strategy identifies two priority missions for the Department’s activities in the homeland from 2012 to 2020. DoD works with the Department of Homeland Security (DHS) and other actors to achieve these missions:

These priority missions are reinforced, supported, or otherwise enabled through the pursuit of the following objectives:

This Strategy also defines a number of other priority lines of effort, or strategic approaches, that are intended to enhance the effectiveness of the Department’s homeland defense and civil support efforts. Although these items require a distinct departmental effort, they do so without adding significant resource requirements. These are:

Defending the homeland neither begins nor ends at U.S. borders, and departmental planning is guided by the concept of an active, layered defense – a global defense that aims to deter and defeat aggression abroad and simultaneously protect the homeland. It is a defense-in-depth that relies on collection, analysis, and sharing of information and intelligence; strategic and regional deterrence; military presence in forward regions; and the ability to rapidly generate and project warfighting capabilities to defend the United States, its Allies, and its interests.

The homeland is a functioning theater of operations, where DoD regularly performs a wide range of defense and civil support activities through U.S. Northern Command (in concert with the North American Aerospace Defense Command, or NORAD), U.S. Pacific Command, and other DoD components. When faced with a crisis in the homeland – for example, a complex catastrophe as a result of an attack against the Nation or a natural disaster – DoD must be prepared to respond rapidly to this crisis while sustaining other defense and civil support operations. Within the homeland, arriving late to need is not an option.

The Department acts globally to defend the United States and its interests in all domains – land, air, maritime, space, and cyberspace – and similarly must be prepared to defend the homeland and support civil authorities in all domains. This Strategy is nested within a series of mutually supporting defense strategies and national guidance that provide policy and direction for the space and cyberspace domains, including the National Security Space Strategy, the Ballistic Missile Defense Review, and the Defense Strategy for Operating in Cyberspace. Other related and supporting strategies include the DoD Mission Assurance Strategy, Presidential Policy Directive 8 – National Preparedness, and Homeland Security Presidential Directive 25 – Arctic Region Policy. Finally, an active, layered defense of the homeland cannot be accomplished unilaterally nor conducted exclusively with military capabilities. The Western Hemisphere Defense Policy, the Strategy to Combat Transnational Organized Crime, the National Strategy for Counterterrorism, the National Strategy for Global Supply Chain Security and other regional and functional strategies articulate a range of defense, diplomatic, law enforcement, and capacity-building activities that the United States pursues with its neighbors to build an integrated, mutually-supportive concept of security.

Objective 2.b: Develop plans and procedures to ensure Defense Support of Civil Authorities during complex catastrophes

DoD has historically supported civil authorities in a wide variety of domestic contingencies, often in response to natural disasters. However, the 21st century security environment, the concentration of population in major urban areas, and the interconnected nature of critical infrastructures have all combined to fundamentally alter the scope and scale of “worst case” incidents for which DoD might be called upon to provide civil support. This environment creates the potential for complex catastrophes, with effects that would qualitatively and quantitatively exceed those experienced to date. In such events, the demand for DSCA would be unprecedented. Meeting this demand would be especially challenging if a cyber attack or other disruption of the electrical power grid creates cascading failures of critical infrastructure, threatening lives and greatly complicating DoD response operations.

DoD must be prepared to help civilian authorities save and protect lives during a complex catastrophe. An effective response will require investments in preparedness (planning, organizing, equipping, and training), improving concepts of operations, and better linking of established Federal and State capabilities and systems. The following areas represent the Department’s priorities for preparedness and response to catastrophic events:

DoD will explore methods to leverage “immediate response” authority to provide life-saving and logistical capabilities to a broader geographic area.

There are many large and medium-size DoD installations throughout the United States with significant resident or tenant capabilities that provide immediate life-saving and life-sustaining support to their on-base population. “Immediate response” authority allows responsible DoD officials to provide support, when requested by civilian agencies, to local communities and to State and Federal officials in extreme conditions. A key to success in meeting the urgent requirements of a catastrophic incident is time. DoD will therefore explore methods to most effectively leverage immediate response authority to employ capabilities to save lives, mitigate property damage, and prevent human suffering during catastrophic incidents.

Geographically proximate force-sourcing DoD will explore new concepts of operations to leverage the relative proximity of Defense installations to a disaster area to provide life-saving capabilities to local, State, and Federal authorities.

A key consideration for catastrophic events is that response elements have the highest probability to save lives within 72-96 hours after an incident. To address this time constraint, DoD will explore force-sourcing options that include a unit’s proximity to the affected area – in addition to its readiness level for overseas missions, which is the traditional driver for mission assignments – as a core consideration for sourcing for disaster response efforts. Additionally, the Department will develop a decision matrix to give senior DoD leaders a mechanism for expedited Defense support during a complex catastrophe, while identifying effects and risks resulting from those ecisions.

DoD will develop rules and modalities to execute its authority for involuntary Reserve mobilization for response to emergencies in the United States, including natural disasters. The Secretary of Defense now has the authority for involuntary mobilization of non-National Guard Reservists for domestic disaster response. The geographic dispersion of Reserve units and their life-saving medical, decontamination, engineering, and other capabilities mandate consideration of Reserve employment for any Total Force response. The Department will develop, refine, and implement policy that facilitates rapid approval for Reserve activation and employment.