The following report was released by the Defense Science Board in March 2009. 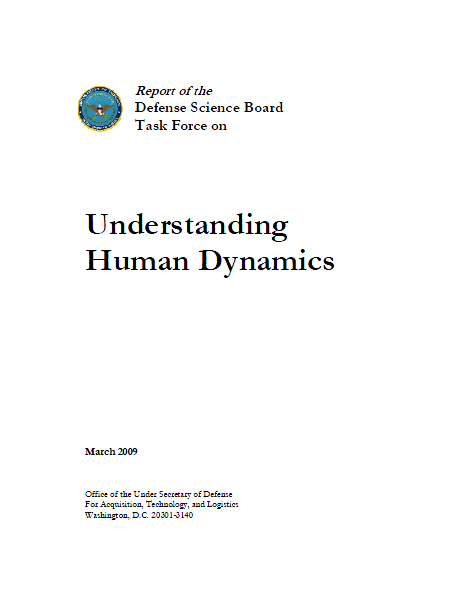 Understanding human dynamics is an essential aspect of planning for success across the full spectrum of military and national security operations. While the adage that “warfare is political conflict by other means” is widely recognized, combatants who underestimate the impact of the human element in military operations do so at their risk. During the Second World War and the reconstruction that followed, as well as during the Cold War, understanding human dynamics was considered essential.

As conceptualized in this report, the term “human dynamics” comprises the actions and interactions of personal, interpersonal, and social/contextual factors and their effects on behavioral outcomes. Human dynamics are influenced by factors such as economics, religion, politics, and culture. Culture is defined herein as the particular norms and beliefs held by every human, that impacts how individuals, groups and societies perceive, behave and interact.

Although, the U.S. military belatedly increased its human dynamics awareness within the current Iraq and Afghanistan theaters, recent progress has been achieved because of its importance in strategic, operational, and tactical decision-making. The U.S. military has also made recent progress in training and sensitizing deployed U.S. forces to the importance of understanding human dynamics in dealing with individuals, groups, and societies. There have been numerous, though mostly uncoordinated, efforts within DoD to manage relevant databases and provide associated tools and cultural advisors. To a large extent, these efforts recapitulate “lessons learned and since forgotten” from prior engagements—capabilities that were permitted to lapse and were no longer organic to DoD.

Substantial improvements by DoD are needed in understanding human dynamics. In particular, DoD must take a longer-term view and build upon increased capability achieved in Iraq and Afghanistan. It must institutionalize the best of current programs and processes so that this capability is also available across the full spectrum of military operations, including increased emphasis on activities, referred to as Phase 0, that seek to mitigate the likelihood of armed conflict. To be effective in the long term, DoD must develop more coherence in its efforts to enhance human dynamics awareness. Most importantly, capability must be expanded beyond the focus of current armed conflicts so that the Department and military services have the flexibility to adjust rapidly to events in other places in the world. Playing “catch-up” will not be an effective option.

The task force believes that opportunities with both near-term and long-term payoffs exist for substantial improvement in the following areas:

An understanding of human dynamics is important to operators and analysts during peacetime as well as wartime. For example, culturally-rooted disputes can lead to the outbreak of hostilities, which may require the commitment of American forces where none were present before. By the same token, if American forces are present in a foreign country during peacetime, culturally insensitive actions or words by even one individual can engender hostility and violence.

While it may be presumptuous to conclude that there are definitive and invariant “lessons” that have been or should have been learned from past experiences, there are certainly insights that are worth consideration:

• Awareness of human dynamics facilitates strategic and tactical success.
• It is necessary to understand and accept that military operations have political objectives and effects.
• Populations matter as much as fighting forces in determining military success.
• Continuity of knowledge on human dynamics is essential, as personnel change and units rotate, particularly in joint/coalition and protracted operations.
• Human dynamics may vary across and within conflicts or operations.

In preparation for the likely range of future U.S. military operations, the following capabilities should be enhanced so that DoD’s leadership, as well as deployed forces, will possess the necessary aptitudes, experience, and support to achieve success:

• Enhanced granularity of strategic, operational, and tactical human dynamics knowledge—including political, military, economic, social, and infrastructure baseline facts and trends throughout the world—will be needed to maintain an effective portfolio of contingency plans in advance of future military operations.
• A clearly defined and understandable definition of human dynamics and culture is essential to coordinating the multitude of research, operational, and intelligence efforts, to avoid undue replication of effort and to achieve improvements in collection, analysis, and dissemination of products. The current definition of “culture,” found in the DoD Dictionary of Military and Associated Terms (Joint Publication 1-02), does not characterize human dynamics in a useful context.
• Human dynamics knowledge should be an integral part of the planning process and incorporated in developing a portfolio of contingency plans in advance of the need for such plans.
• Cross-cultural awareness and astuteness of commanders, as well as soldiers, sailors, airmen, and marines can be achieved through changes in education, training, foreign language acquisition, and career development.
• A cadre of on-call human dynamics and civil affairs experts could provide supplemental knowledge and capacity for contingency planning, as well as for strategic, operational, and tactical phases of mission management. These experts would bring in-depth functional knowledge, along with detailed experience in the area of concern.
• Non-U.S. military organizations, nongovernmental organizations, and international organizations should be included in the process of collecting and analyzing information on human dynamics. Importantly, these analytic assets do not have to be assigned to an intelligence organization.
• The emphasis should be on human dynamics “products” in addition to centralized databases and supposed systems. Products, as recommended by Colonel H.R. McMaster in Iraq, can be envisioned at three levels:
– “World view” documents (e.g., country handbooks) provide a basic overview of a country, region, or culture. With respect to human dynamics, these documents should include perspectives of factions (tribes, clans, villages), fears, aspirations, prejudices, and beliefs of local populations.
– Micro-history of the region to include deep and narrow, updated information concerning rivalries, smuggling routes, nature of external support, and other relevant information. Language proficiency and cultural, political, and economic expertise is required to prepare these products.
– Short-term operational assessments prepared by units departing an area to aid the incoming units in assessing the area and for continuity of operations. A standard format and content outline should be developed that includes details of successes and especially of failures in dealing with the populace.
• Education and training are critical to the delivery of useful information on human dynamics:
– Language proficiency and cultural awareness are needed as part of the professional military education process with a phased approach recognizing a service member’s rank and occupational specialty.
– Instruction should be delivered to the greatest extent possible by persons who have relevant depth of knowledge and recent experience in the operational environment being discussed.
• Depth of knowledge about diverse audiences and the complex range of information exchange in which they participate will increase in importance to future military operations, as the criticality of the information environment is recognized by both adversaries and allies.
• Advances in social, cognitive, and neurological science may offer insights into human behavior, which academia, the private sector, the U.S. government, and its allies and adversaries can all be anticipated to explore.
• Enhanced human dynamics astuteness that integrates region-specific knowledge with the ability to coordinate and cooperate across organizational lines will become key to successful future military operations that are joint, interagency, intergovernmental, or multinational, and may also include public/ private partnerships with civil society.