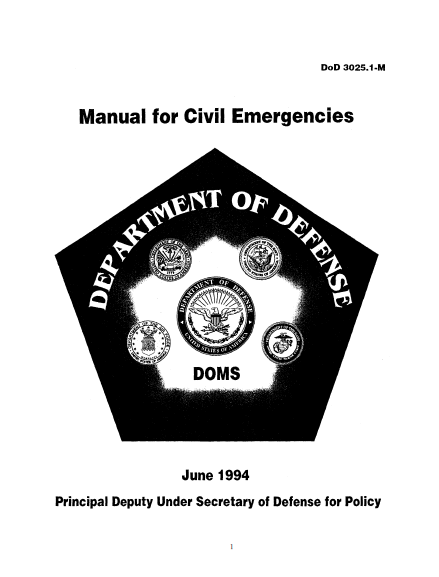 C1.1.1. This Manual assigns responsibilities, prescribes procedures, and provides guidance by which the Department of Defense responds to ALL HAZARDS in accordance with 42 U.S.C. 5121, et seq., as amended (hereafter referred to as the Stafford Act, reference (f)). Under the authority of the Civil Defense Act of 1950, 50 U.S.C. App. 2251, et seq., (reference (a)) and National Security Directive 66 (dated March 16, 1992) (reference (m)) this Manual supports the National civil defense policy and Federal and State civil defense programs in cooperation with the Federal Emergency Management Agency (FEMA).

C1.1.2. The procedures established in this Manual constitute a single system for Military Support to Civil Authorities (MSCA) for use by the DoD Components to plan for, and respond to, requests from civil government agencies for military support in dealing with actual or anticipated civil emergencies requiring Federal response (including National security emergencies as defined in E.O. 12656, reference (l)).

C1.3.1. In accordance with the Stafford Act, reference (f), it is the policy of the Federal Government to provide an orderly and continuing means of supplemental assistance to State and local governments as they execute their responsibilities to alleviate the suffering and damage resulting from catastrophic or major disasters or emergencies. Upon declaring a disaster or emergency, the President may direct any Agency of the Federal Government to undertake missions and tasks (on either a reimbursable or non-reimbursable basis) to provide assistance to State and local agencies. A Federal Coordinating Officer (FCO) is appointed by the President with authority to coordinate the Federal response effort in the affected area. The President has delegated the authority to appoint FCOs to the Director of FEMA. The Director has further delegated the authority to appoint FCOs to the Associate Director.

C1.3.2. In accordance with the Federal Civil Defense Act of 1950, as amended, reference (a), the National civil defense policy is to develop capabilities common to all catastrophic emergencies that will support ALL-HAZARDS emergency management at State and local levels to protect the population and vital infrastructure. Under the National civil defense policy, the Department of Defense will support civil authorities in civil defense, including issuing instructions to RC units on steps they will follow in planning and carrying out MSCA and establishing guidance for State military headquarters for response in both peacetime disasters and National security emergencies. Accordingly, all planning and response by the DoD Components for civil defense are governed by this Manual, with the exception of military support to civil disturbance operations (DoD Directives 3025.12 and 5525.5, references (b) and (o)) and contingency war plans.

C1.3.3. Executive Order 12656, reference (l), establishes the policy of the Federal Government to have sufficient capabilities at all levels of government to meet essential defense and civilian needs during any National security emergency. 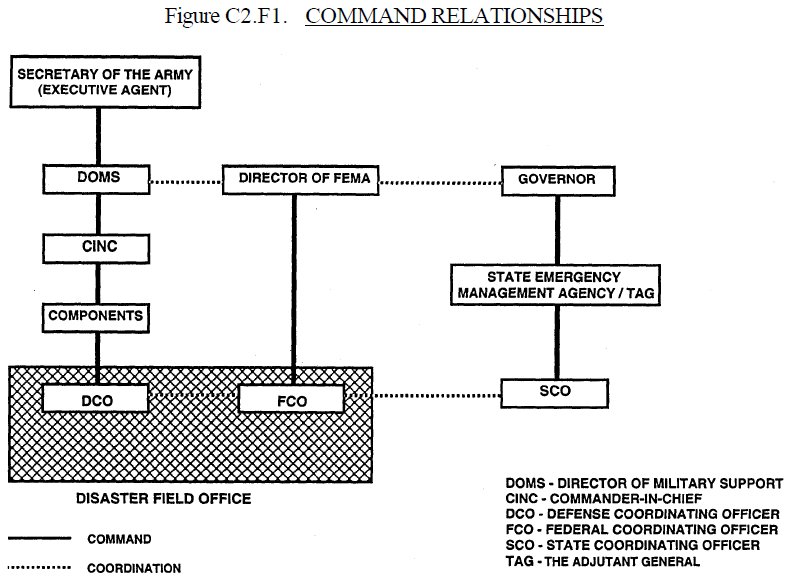 C2.1.1. The Department of Defense is capable of rapidly responding to a broad spectrum of emergencies on a no-notice basis. The personnel and associated equipment, although organized to conduct combat operations, can easily apply many of their skills in support of disaster or emergency assistance operations (of short duration). The command and control system inherent in military units provides a significant advantage when deployed to the “bare base” environment created by a catastrophic disaster. Capitalizing on these capabilities enables the Department of Defense to respond quickly under a lead Federal Agency, stabilize a situation, and then transition operations to Federal and State authorities.

C2.1.2. The Department of Defense responds to domestic disasters and/or emergencies in accordance with a variety of plans with different Federal Agencies in the lead. The most prominent of these plans is the FRP, which is coordinated by FEMA. The Department of Defense is constrained as to the services it can perform in support of civil authorities by the provisions of the Staffford Act (reference (f)). Under 42 U.S.C. 5170b, reference (f); however, the President may authorize the Secretary of Defense to use DoD resources for performing on public and private lands any emergency work that is made necessary by an incident that may ultimately qualify for assistance, and which is essential for the preservation of life and property. The period of emergency work cannot exceed 10 days. Also, under DoD Directive 3025.1, paragraph 4.5. (reference (c)), commanders may provide this assistance when time does not permit prior approval from higher headquarters. In addition, United States Army Corps of Engineers has civil authorities, responsibilities, capabilities, and funding under 33 U.S.C. 701n(a) (reference (r)), which are unique within the Department of Defense. As a consequence, USACE is involved in disaster response more frequently than the rest of the Department of Defense.

C3.2.5.1. General. The Department of Defense provides support to other Federal Agencies in the event of a mass immigration emergency. Historically, the support has been in the form of technical assistance, services and facilities. This support is provided to the lead Federal Agency on a temporary basis.

C3.2.5.2.1. The Department of Defense may be asked to provide installations and services associated with housing migrants while the Immigration and Naturalization Service completes the administrative requirements for the migrants to
enter the United States.

C3.2.5.2.2. The support rendered by the Department of Defense should be temporary. When at all possible, DoD resources will be leased to the principal Federal Agency. Incidental costs incurred as a result of providing DoD resources are reimbursable to the DoD Components that rendered the support. (See Chapter 9.)

C3.2.5.2.3. Commanders in Chief of Atlantic Command and Pacific Command can expect to be designated as the Supported Commander for the provision of support to immigration emergencies within their assigned AORs.