The following report was released in September 2011 and discusses the DoD’s programs to research and integrate sociocultural mapping and behavior prediction into the military planning process. 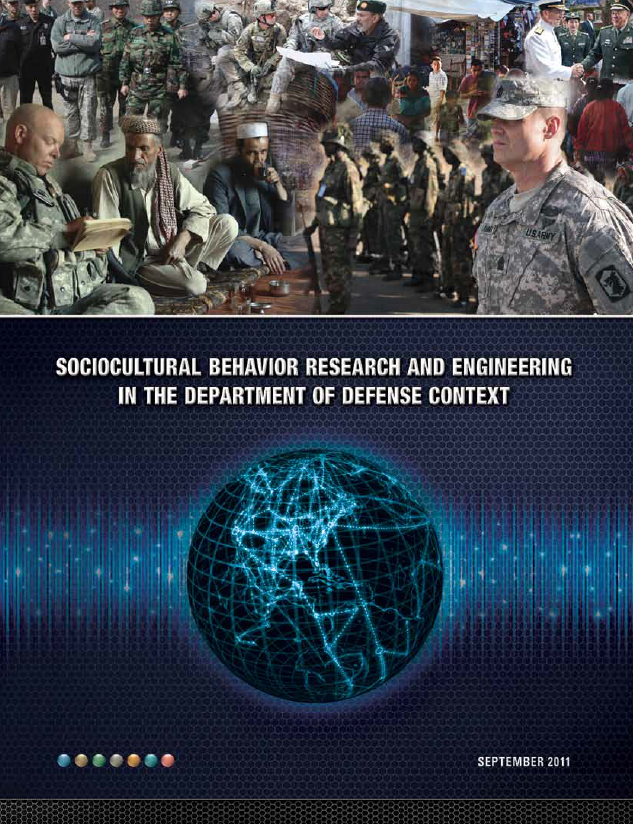 On December 17, 2010, a Tunisian street vendor named Mohamed Bouazizi set himself on fire to protest repeated harassment and humiliation by the police and confiscation of the produce he was selling. The unrest that followed his act, facilitated by Facebook, quickly led to the resignation of the Tunisian president. More uprisings followed in nearby countries, including Egypt, where long-time president Hosni Mubarak was forced out of office. These revolutionary events took much of the Western world by surprise, and effects of the several uprisings and regime changes continue to ripple across the region.

Instability like that experienced in North Africa is one of several challenges that impact U.S. strategic interests—challenges that include violent extremism, growing access to weapons of mass destruction (WMD), and cyber threats. These widely disparate challenges seem increasingly likely to share certain features. Leading actors may well be small groups or even individuals, connected and perhaps driven primarily by cultural or social factors. In many cases, these actors will be geographically distributed, perhaps only loosely affiliated with one another, embedded in general populations, and will use local networks, economies, and sympathetic governments for cover and support. They will also exhibit agile, adaptive behavior, including an emphasis on influencing general popular sentiment through culturally anchored communication.

These shared features indicate that in order to develop effective strategies and courses of action (COAs) across this broad range of problem types, the U.S. military must be able to forecast behaviors of groups or perhaps key individuals in foreign operational contexts. Such forecasts depend upon the ability to detect relevant indicators amid the baseline noise, an ability that can only be acquired through a deep understanding of the extant culture, social structure, history, and language of a region of interest. Taken together, these represent a vision for desired Department of Defense (DoD) capability regarding sociocultural behavior:

Mastery of the factors that optimize our forces’ ability to forecast behaviors driven by social and cultural variables and take effective courses of action in the full range of military operations.

This ambitious vision calls for a capability with many difficult-to-achieve features. “Mastery” would mean that U.S. forces would have the data on indigenous populations and the training they need to move easily in those populations; could see the parameters of culture and society and integrate those with conventional mapping of the physical terrain; could detect often complex and dynamic networks, where adversaries and civilian populations are intermingled; and would possess non-kinetic tools as well as the ability to anticipate both the near-term and long-term impacts of applying those tools.

The DoD has recognized that this vision can best be realized and sustained through a coherent, innovative DoD-wide program of research and engineering (R&E), and has moved aggressively to meet this need. With leadership from the Assistant Secretary of Defense for Research and Engineering, and programs such as Minerva and the Human Social Culture Behavior (HSCB) Modeling Program, DoD has established a strong science foundation and successfully moved resources and tools into operational use. DoD’s investment includes programs and initiatives from the armed services, the Defense Advanced Research Projects Agency, the Combatant Commands, and the defense intelligence community.

With all of the innovative work underway, the DoD sociocultural behavior R&E community now finds itself at a point of transition and great opportunity. To date, the community has accomplished some outstanding work on very difficult problems. Yet most of the individual projects have proceeded more or less discretely, each attacking some part (or parts) of a given problem. The field of sociocultural behavior R&E has matured to the point where it can now begin to bring those discrete elements together, pursuing integration in order to offer more end-to-end solutions.

Such integration would represent a significant step forward—a step that will be greatly aided by applying a framework for sociocultural behavior R&E that reflects end-to-end military operational needs. In addition to indicating technology transition paths, such a structure would help to uncover integration opportunities as well as gaps where further R&E is needed. This paper introduces the Sociocultural Behavior Capability Areas Framework. Derived from familiar and widely applied concepts for military operations, including the Observe, Orient, Decide, Act (OODA) loop, the Joint Fires Targeting Cycle, and the strategic communication process, the framework comprises four sets of capabilities, each set feeding into the next and forming a cycle (see Figure 1).

Each of the four capability areas has varying needs for all the sociocultural behavior R&E building blocks: validated multidisciplinary theory, proven data collection methods and robust systems for using the data, accessible and theory-based computational models, and sophisticated training and education.

Significant progress has been made toward building a DoD capability for understanding sociocultural behavior, and some solutions have been delivered to military end users. However, there is much work to be done. The complexity of human behavior defies easy understanding or reliable forecasting. In the context of irregular warfare, counterinsurgency, post-conflict recovery, or any other mission setting of the Armed Forces, technology—including computational models—is essential to support decision making. That technology must be rooted in well-validated, inter-disciplinary theory, and applied appropriately, with recognition of its strengths and limitations. Priorities for sociocultural behavior R&E must reflect needs across the full spectrum of operational missions, and must be linked to the U.S. military’s strategic priorities and grand challenges: Counter Violent Extremism, Deter and Defeat Aggression, Strengthen International and

Regional Security, and Shape the Future Force. Ultimately, the test of the knowledge products, technologies, and models produced through DoD sociocultural behavior R&E will be how they contribute to development of the future force. The following recommendations are designed to give analysts, warfighters, and leaders more time and opportunity to do what they do best: out-think and out-innovate adversaries by bringing all instruments of power to bear.

2. Build quantitative scientific underpinnings for a DoD sociocultural behavior capability, with the goal of achieving rigor on par with that of the physical sciences. This would include establishing and building consensus on methods for validating and verifying computational models of sociocultural behavior as they apply to military operations.

3. Establish and sustain a DoD-wide repository of sociocultural behavior data, along with the ontologies, standards, and systems necessary to ensure enterprise-wide access for military intelligence and operations analysis.

4. Develop new methodologies, tools, and training that will measurably increase the military’s capacity to collect valid sociocultural behavior data in denied environments and those with low levels of literacy and/or information technology penetration.

6. Research and engineer a “social radar”—a global and persistent indications and warnings capability consisting of integrated technologies for detecting and monitoring operationally relevant sociocultural behavior signatures. This capability would include data, resources, tools, and training that will enable rapid recognition, tracking, and countering of adversarial narratives. It will also serve as a framework for the integration of other capabilities.

7. Engineer hybrid modeling systems (integrating game-theoretic, system-dynamic, and agent-based modalities) that operational decision makers can use to forecast the emergence of instability and violent extremism and to explore alternative COAs for both types of challenges.

8. Develop and validate metrics for gauging the effects of non-kinetic COAs, along with tools and systems for planning integrated implementation of kinetic and non-kinetic COAs.

10. Foster and support venues designed to share information, assess progress in the state of the art and, importantly, enable collaboration to enhance multidisciplinary approaches to problems and challenges.