(U//FOUO) DoD Instruction: Illumination of Objects in Space by Lasers

The following instruction is part of a series of “limited release” DoD doctrine publications that are not released to the public. 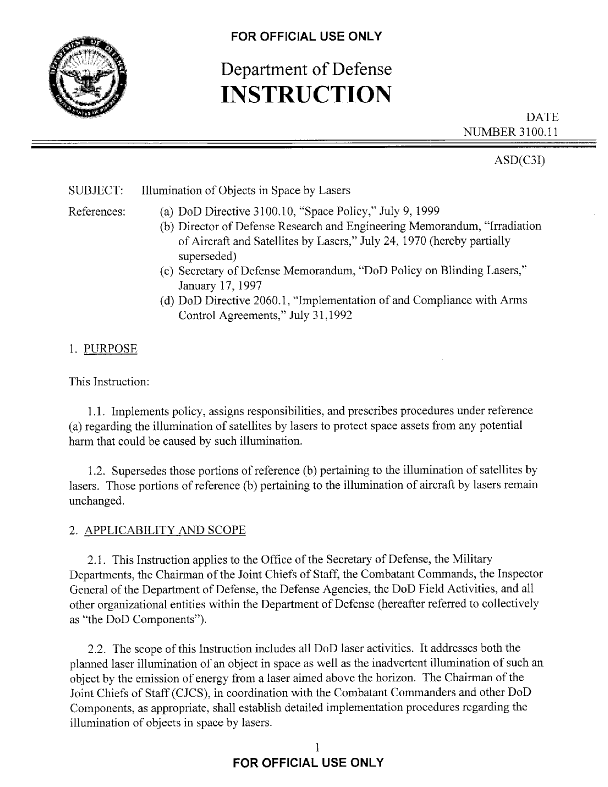 Instruction O-3100.11: Illumination of Objects in Space by Lasers

1.1. Implements policy, assigns responsibilities, and prescribes procedures under reference (a) regarding the illumination of satellites by lasers to protect space assets from any potential harm that could be caused by such illumination.

2.2. The scope of this Instruction includes all DoD laser activities. It addresses both the planned laser illumination of an object in space as well as the inadvertent illumination of such an object by the emission of energy from a laser aimed above the horizon. The Chairman of the Joint Chiefs of Staff (CJCS), in coordination with the Combatant Commanders and other DoD Components, as appropriate, shall establish detailed implementation procedures regarding the illumination of objects in space by lasers.

4.2. All DoD laser activities shall be conducted in a safe and responsible manner that protects space systems, their mission effectiveness, and humans in space, consistent with national security requirements, in accordance with reference (a). All such activities shall be coordinated with the Commander in Chief of U.S. Space Command (CINCSPACE) for predictive avoidance or deconfliction with U.S., friendly, and other space operations.

4.3. The use of lasers specifically designed to cause permanent blindness in humans is prohibited, in accordance with reference (c).

4.4. Any test, series of tests, demonstration, or exercise of a laser illuminating a satellite in space shall be submitted to thc Secretary of Defense (SecDef) for approval if:

4.4.1. It has the potential to disrupt, deny, degrade, or destroy the target;

4.4.3. It is the first such test, series of tests, demonstration, or exercise of its kind;

4.4.4. It is a vulnerability test illuminating a live satellite in space;

4.4.6. It raises a significant issue of compliance with arms control treaty obligations;

4.4.7. It raises a significant issue of compliance with other international legal obligations; or

4.4.8. It requires coordination with other U.S. Government departments and agencies.

4.5. Any test, series of tests, demonstration, or exercise of a laser shall not require SecDef approval if it does not meet one or more 01 the criteria of paragraph 4.4 and is illuminating:

4.5.2. An object above the horizon or in space for the sole purpose of detection, pointing, ranging, tracking, communications, calibration, or imaging; or

4.6. Requests shall be considered from other U.S. Government departments and agencies to review the proposed laser illumination of a U.S. object above the horizon or in space and provide predictive avoidance, approving such proposals where appropriate.

4.7. Requests shall be considered from non-U.S. Government entities to review the proposed laser illumination of a U.S. object above the horizon or in space and provide predictive avoidance on a non-interference basis, approving such proposals where appropriate.