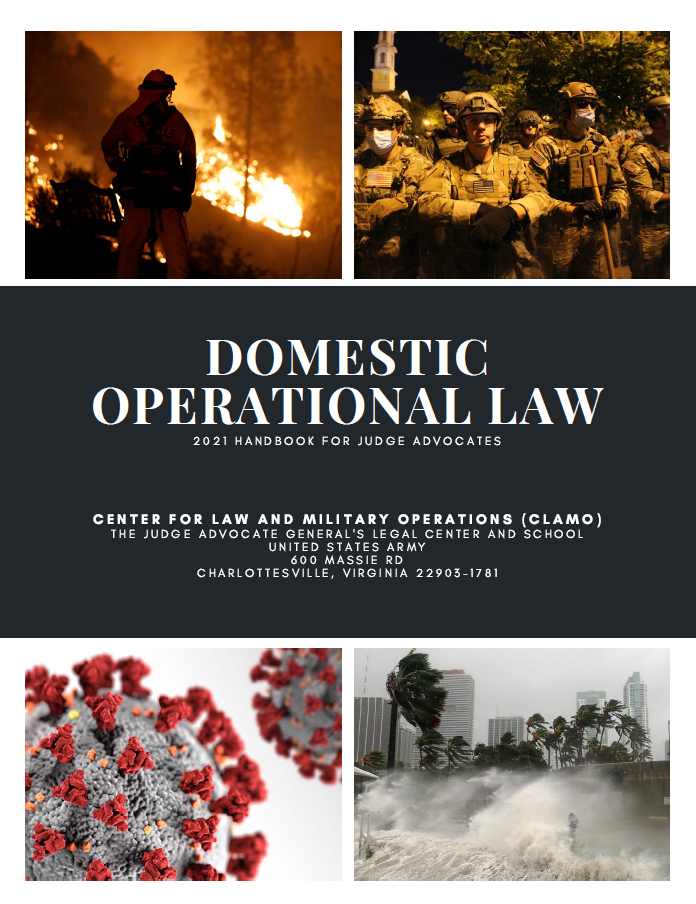 This Handbook focuses on the legal matters pertaining to providing assistance to domestic civil authorities, also known as DSCA. Circumstances involving the exercise of homeland defense authority and capabilities, i.e. “countering air and maritime attacks and preventing terrorist attacks on the homeland,” are beyond the scope of this handbook. Nonetheless, it should be kept in mind that actions taken within the homeland defense function may directly impact the DoD’s DSCA mission once an event has occurred. Likewise, for ongoing events or continuing attacks, DSCA actions may affect homeland defense capabilities.

This chapter begins with a discussion of the PCA. It then discusses the applicable provisions of the U.S. Code addressing military support to civilian law enforcement and the DoD regulations that implement this guidance. Information relating specifically to counterdrug support is discussed separately in the Chapter 7 due to the size and complexity of this DoD mission. 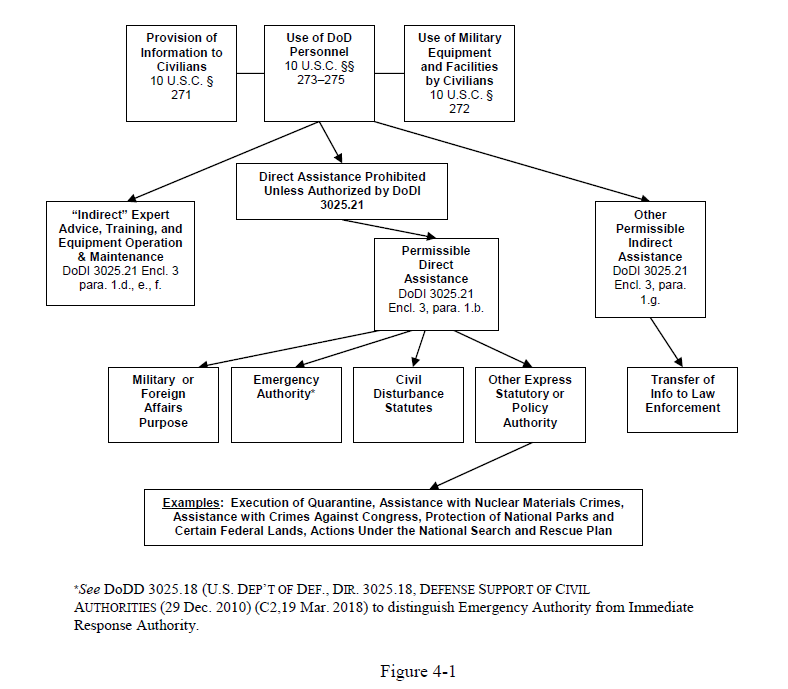 A second type of direct assistance that may be permitted is action that falls under the “emergency authority” of the United States. This is an inherent authority of the Federal Government under the Constitution. Actions permitted in accordance with this authority are those necessary to preserve public order and to carry out governmental operations within U.S. territorial limits, or otherwise in accordance with applicable law. In such circumstances, necessary force may be used. The circumstances when the use of emergency authority is appropriate are very rare, however; typically they will arise only during a large-scale and unexpected civil disturbance.

“Emergency authority” is reserved for extremely unusual circumstances. When authorized under the provisions of DoDD 3025.18, “Federal military commanders have the authority, in extraordinary emergency circumstances where prior authorization by the President is impossible and duly constituted local authorities are unable to control the situation, to engage temporarily in activities that are necessary to quell large-scale, unexpected civil disturbances because:

• Presidential approval for quelling civil disturbances is not a prerequisite to the use of military forces in these two very limited circumstances.

The third type of permitted direct assistance by military forces to civilian law enforcement is action taken pursuant to DoD responsibilities under the Insurrection Act, 10 U.S.C. §§ 251–255. This statute contains express exceptions to the PCA that allow for the use of military forces to repel insurgency, domestic violence, or conspiracy that hinders the execution of State or Federal law in specified circumstances. The Insurrection Act permits the President to use U.S. Armed Forces to enforce the law when:

• There is an insurrection within a State, and the State legislature (or Governor if the legislature cannot be convened) requests assistance from the President;

• A rebellion makes it impracticable to enforce the Federal law through ordinary judicial proceedings; or

• An insurrection or domestic violence opposes or obstructs Federal law, or so hinders the enforcement of Federal or State laws that residents of that State are deprived of their constitutional rights and the State is unable or unwilling to protect these rights

C. Authorities for Use of DoD Forces for a Civil Disturbance Operation

The U.S. Federal Armed Forces, including the reserves, are governed by Title 10 of the U.S. Code. NG forces have an additional statutory authority codified in Title 32 of the U.S. Code, due to their unique status as both a Federal Reserve component and as a part of the organized militia of their respective State or territory. The “3025-series” of DoD instructions, directives, and manuals provide the guidance necessary to properly operate during civil support operations. More specifically, the following core DoD policies represent the core documents used by Federal personnel:

• Department of Defense Instruction 3025.22, The Use of the NG for Defense Support of Civil Authorities; and

1. The Standing Rules for the Use of Force for U.S. Forces

For U.S. Armed Forces operating under Title 10, civil disturbance operations are conducted in accordance with Enclosures L and N to Chairman, Joint Chiefs of Staff Instruction (CJCSI) 3121.01B, Standing Rules of Engagement/Standing Rules for the Use of Force for U.S. Forces (SRUF). Guidance on how and when forces can use force in a CDO mission are detailed in the enclosures of the policy. Although the policy is classified, Annex L is not in itself a classified document. Thus, it can be shared with our mission partners. In addition to this policy, as part of operating in an inter-agency environment in support of civil authorities, judge advocates must make themselves familiar with State and local laws regarding the use of force. The NGs in each State have their own RUF, not to be confused with the SRUF. The RUF for each State is based on State law and approved by the State’s Attorney General. Therefore, each State may have a different RUF. This is particularly important for Federal forces if joint patrols or other missions are conducted. In such a case, judge advocates, both active and reserve component, should review the RUF for the State NG and the SRUF for Title 10 forces to identify any differences in the permissible application of force. The differences should be clearly explained to commanders, thereby enabling them to proceed in accordance with the law. Additionally, if NG personnel from one State are operating in another State, the agreements memorializing the support between the States should specify what rules for the use of force the out-of-state NG will follow. In this situation, judge advocates should be prepared to train personnel on the applicable rules of another State.

State and Federal law govern search, seizure, arrest, detention, and confinement occurring during a CDO. The U.S. Attorney General is responsible for setting overall guidelines governing the conduct of civil disturbance operators when the Federal military is involved. Judge advocates should familiarize themselves with any policies and procedures set forth by the Department of Justice (DOJ). Service members should be trained in advance on proper legal procedures for search, seizure, arrest, and detention, and should be aware that actions not conforming to Constitutional standards could jeopardize prosecution of criminal actors or subject the member to civil or criminal liability.

a. Detention and Confinement

Whenever possible, any arrest or apprehension should be made by the civil police force unless they are not available or require assistance. If it is necessary for Federal military forces to make an apprehension, they should do so under the appropriate legal authority, work in support of civil authorities, and should, whenever possible, ensure that civilian authorities are present. Joint patrols with members of the State’s NG and local law enforcement officers has proven to be most beneficial.