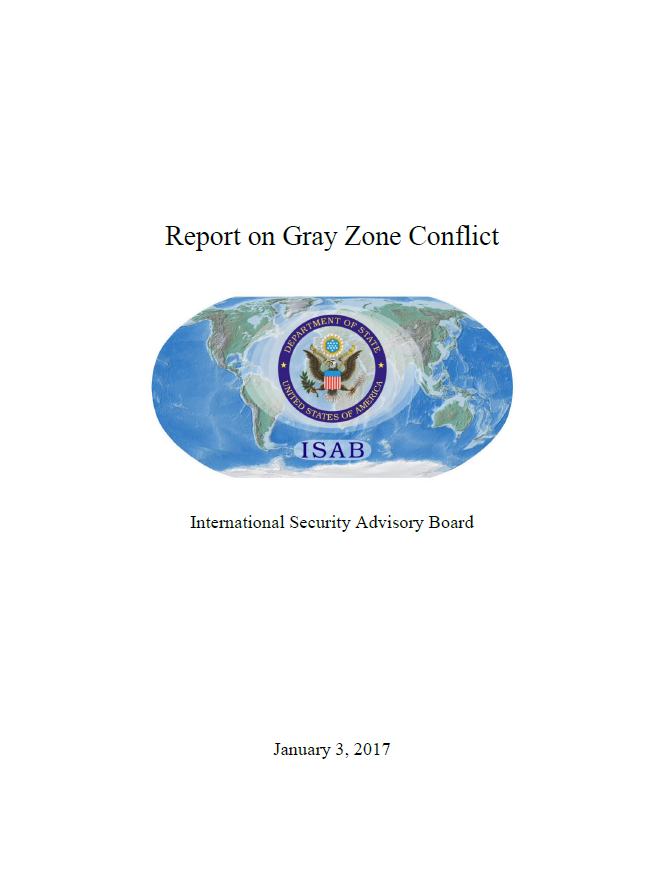 The study addresses the challenges facing the United States from the increasing use by rivals and adversaries – state and non-state alike – of what have come to be called “Gray Zone” techniques.

The term Gray Zone (“GZ”) denotes the use of techniques to achieve a nation’s goals and frustrate those of its rivals by employing instruments of power – often asymmetric and ambiguous in character – that are not direct use of acknowledged regular military forces.

The report is organized according to the specific subjects the ISAB was directed to consider by the Terms of Reference (TOR) – Characteristics of GZ Operations, Policy Options and Concepts, and Deterrence/Dissuasion.

I. Characteristics of GZ Conflict

Perhaps the most widely used definition of Gray Zone conflict is that established by the U.S. Special Operations Command (SOCOM): “gray zone challenges are defined as competitive interaction among and within state and non-state actors that fall between the traditional war and peace duality. They are characterized by ambiguity about the nature of the conflict, opacity of the parties involved, or uncertainty about the relevant policy and legal frameworks.” Read too broadly, this definition would embrace practically all international interaction, most of which is directed in some degree at affecting the actions or view of other countries. However, it is possible to describe the problem without seeking a universal and precise definition.

The term “Gray Zone” may be new; the phenomenon is not. Although many of the techniques used now are based on modern technology, notably cyber and networked communication, many are as old as history. What are now being called GZ methods have been conducted in the past under such names as “political warfare,” “covert operations,” “irregular or guerrilla warfare,” “active measures,” and the like. In some sense, the Cold War was one protracted GZ campaign on both sides on a global scale. The Trojan Horse exploited many of the instruments of a GZ operation – creating confusion and division in enemy opinion, extending ostensible inducements, implanting hidden military forces, deception, and clandestine infiltration of enemy territory.
The central characteristic of GZ operations is that they involve the use of instruments beyond normal international interactions yet short of overt military force. They occupy a space between normal diplomacy and commercial competition and open military conflict, and while often employing diplomacy and commercial actions, GZ attacks go beyond the forms of political and social action and military operations with which liberal democracies are familiar, to make deliberate use of instruments of violence, terrorism, and dissembling. Moreover, they often involve asymmetry in magnitude of national interests or capabilities between the adversaries. GZ techniques include:

Currently, the United States can reasonably be said to face GZ campaigns in a range of theaters: