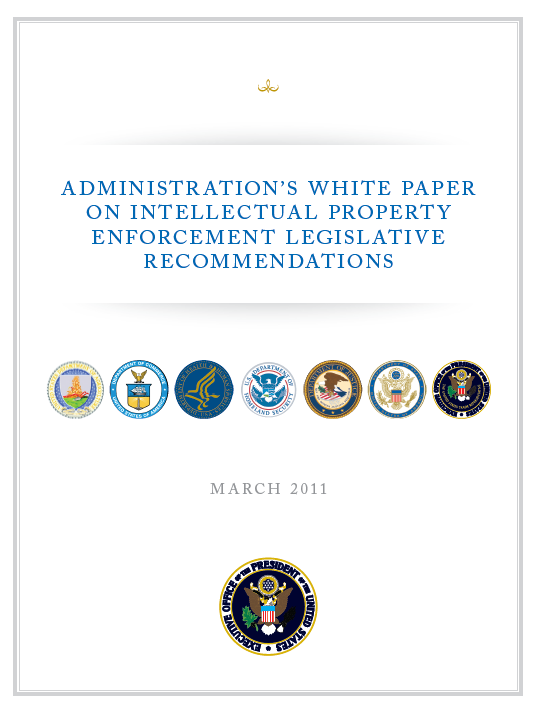 On June 22, 2010, the U.S. Intellectual Property Enforcement Coordinator (IPEC) issued the Administration’s first Joint Strategic Plan on Intellectual Property Enforcement (Strategy), which was developed in coordination with many Federal agencies, including the Departments of Commerce, Health and Human Services, Homeland Security (DHS), Justice (DOJ), and State, and the U.S. Trade Representative. As part of the Strategy, the Administration undertook to review existing laws to ensure that they were effective and to identify deficiencies that could hinder enforcement. Based on that review, this White Paper identifies specific recommended legislative changes, designed to increase the effectiveness of U.S. enforcement efforts. We will, of course, continue to assess existing legislation and recommend any further changes to the law as the need arises.

Piracy and counterfeiting in the online environment are significant concerns for the Administration. They cause economic harm and threaten the health and safety of American consumers. Foreign-based and foreign-controlled websites and web services raise particular concerns for U.S. enforcement efforts. We are aware that members of Congress share our goal of reducing online infringement and are considering measures to increase law enforcement authority to combat websites that are used to distribute or provide access to infringing products. We look forward to working with Congress on those efforts and the recommendations contained in this paper in the coming year.

The Administration recommends three legislative changes to give enforcement agencies the tools they need to combat infringement:

1. Clarify that, in appropriate circumstances, infringement by streaming, or by means of other similar new technology, is a felony;
2. Authorize DHS, and its component U.S. Customs and Border Protection (CBP), to share pre-seizure information about, and samples of, products and devices with rightholders to help DHS to determine whether the products are infringing or the devices are circumvention devices; and
3. Give law enforcement authority to seek a wiretap for criminal copyright and trademark offenses.
The Administration recommends two legislative changes to allow DHS to share information about enforcement activities with rightholders:
1. Give DHS authority to notify rightholders that infringing goods have been excluded or seized pursuant to a U.S. International Trade Commission (ITC) order; and
2. Give DHS authority to share information about, and samples of, circumvention devices with rightholders post-seizure.