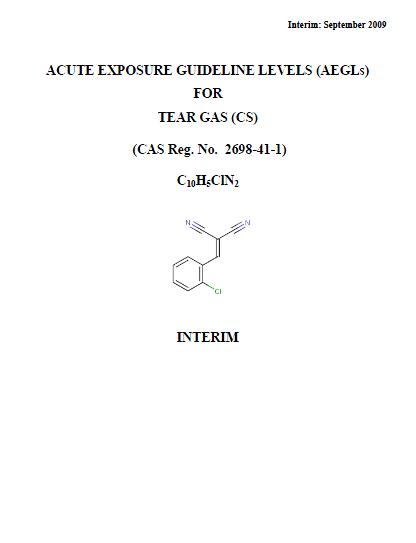 Tear Gas (o-Chlorobenzylidenemalonitrile; CAS No. 2698-41-1) is a white crystalline powder with a pepper-like odor. It was first synthesized by Corson and Stoughton in 1928 (thus the abbreviation “CS”) (Corson and Stoughton, 1928; U.S. Army et al., 2005). It was developed in the 1950s as a replacement for the chemical incapacitant CN (1-chloroacetophenone) used by police because CS was a much more potent irritant than CN, but was significantly less toxic (WHO, 1970; Hu et al., 1989; Colgrave and Creasey, 1975). It was adopted for use by the military shortly after, and was widely used in Vietnam (Hu et al., 1989; WHO, 1970). It is currently used as an incapacitating agent both by military and law enforcement personnel (HSDB, 2008). It is reported that an aerosol concentration of 4 mg/m3 will disperse the majority of rioters within 1 minute, and 10 mg/m3 will deter trained troops (Upshall, 1973). With the exception of more severe cutaneous reactions, recovery from exposure is generally rapid upon exposure to fresh air, generally within 30 minutes after exposure (Ballantyne, 1977). CS may be manufactured through carbonyl condensation by combining o-chlorobenzaldehyde and malononitrile (HSDB, 2008). Recent production data were not located.

The AEGL-1 values were based on human exposure to 1.5 mg/m3 for 90 minutes (Punte et al., 1963). All four subjects could tolerate the exposure, but experienced eye and nose irritation and headache. One subject developed nasal irritation within 2 minutes, three subjects developed headache (at 45, 50, and 83 minutes), and all four experienced ocular irritation (at 20, 24, 70, and 75 minutes). A modifying factor of 10 was applied to reduce the point-of-departure from a LOAEL to a NOAEL for AEGL-1 effects. An intraspecies uncertainty factor of 3 was applied because contact irritation is a portal-of-entry effect and is not expected to vary widely among individuals. The intraspecies UF of 3 is also supported by the fact that responses of volunteers with jaundice, hepatitis, or peptic ulcer or those that were 50-60 years old were similar to those of “normal” volunteers when exposed to a highly irritating concentration of CS for short durations (Punte et al., 1963; Gutentag et al., 1960). An interspecies uncertainty factor of 1 was applied because the study was conducted in humans. Time scaling was not applied in the development of the AEGL-1 values, because the critical effect (irritation) is a function of direct contact with the tear gas and is not likely to increase with duration of exposure at this level of severity (NRC, 2001). 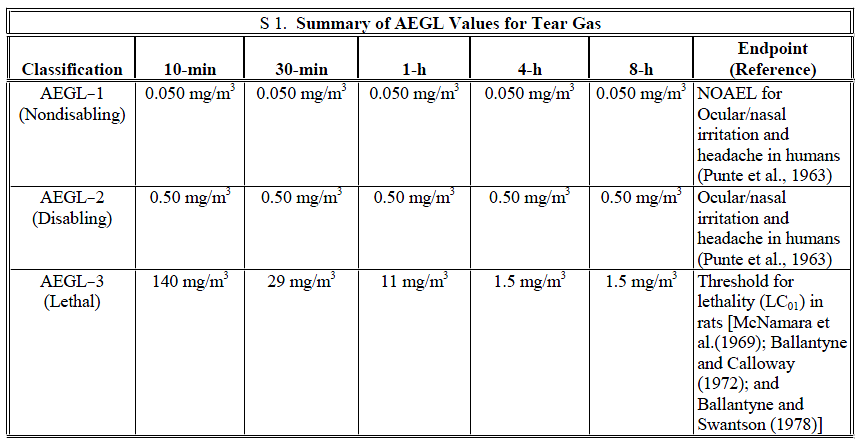