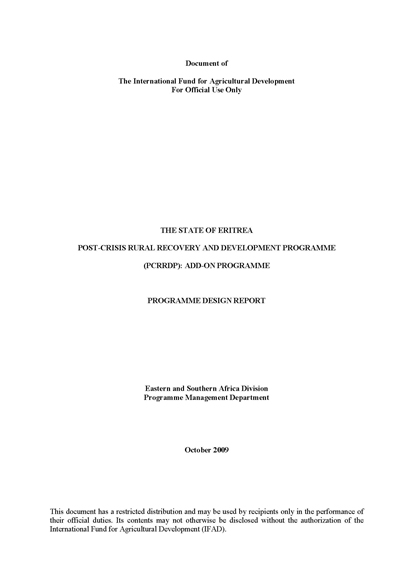 In the light of the threatening global food crisis, and soaring food prices, the Government of Eritrea (GOE) requested IFAD to expand the on-going Post-Crisis Rural Recovery and Development Programme (PCRRDP) noting the good implementation capacity, and the good agricultural potentials of both districts, the poverty and food insecurity in the two regions and nationally. An IFAD mission which visited the country in February 2008 examined the government request and came to a conclusion that capacity exists to implement additional agricultural initiatives which will further contribute to the food security in the region and nationally. A draft proposal was submitted to IFAD in May 2008. IFAD reviewed the proposal and advised on needed improvements. An improved proposal was submitted to IFAD in July 2008. On the basis of the proposals, and further consultation with GOE and beneficiaries, IFAD produced an initial programme design for the PCRRDP – Add-on Programme in September 2008. The initial design report was submitted to the Government of Eritrea, and European Community, a potential co-financier, in September 2008. An IFAD mission which visited Eritrea in November 2008, reviewed the proposals with the GOE and EC. Both the GOE and EC expressed satisfaction with the programme design and provided comments and guidance to finalize the programme design. A revised final programme design document which responds to the comments and guidelines provided was produced by IFAD in January 2009. The OSC approved a supplementary financing of USD 8 million in June 2009. A final discussion of the draft report was held with GOE in August 2009. A final design document was produced by IFAD in August 2009. 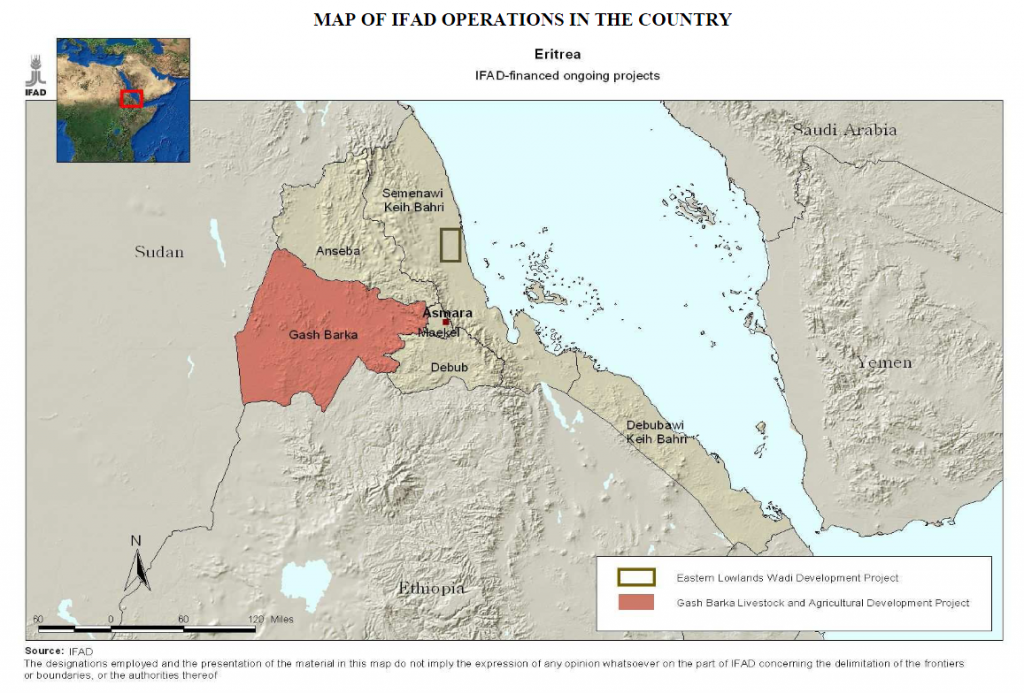 The Country, Economy and Sectoral Context

The Country, Economy and sectoral context have remained basically unchanged from the situation reported in PCRRDP appraisal report. The Appraisal report for PCRRDP therefore remained a reference document in this regard. However, the poor rainfall of 2008 has caused deterioration in the food supply situation in the country. The poor agricultural output has been further compounded by the global food crisis and soaring food prices. The prices of basic grains (sorghum, pearl millet, sesame, wheat and barley) have risen in 2008/2009 by 19-26%, vegetables by 16-25.9%, and eggs, milk and butter by 17%. The livestock prices on the other hand have shown a mixed trend which indicates that the poor rural households have increased their sales of livestock to meet their family food needs. The food shortage and the attendant soaring food prices are adversely affecting the vulnerable groups who have started depleting their assets.

The COSOP approved in 2006, defines a strategy for IFAD, aiming to add value to the government’s policies and programmes in rural poverty reduction. The strategy reflects the challenges of dealing
with acute rural poverty in a crisis-affected country that is threatened with severe environmental degradation and limited fiscal resources but with commitment to self-determination to address poverty
and food insecurity. The COSOP, has identified opportunities in sustainable natural resource management emphasizing watershed management in the highlands to reduce erosion which is responsible for soil losses, and dam siltation; low-cost smallscale irrigation development using reservoirs, dams and spate irrigation in the central highlands and lowlands of west and east; forestry and agro-forestry to provide fuel wood, increase fodder for livestock, and reduce erosion; fodder/forage improvement to raise livestock productivity and alleviate overgrazing. IFAD’s strategic objectives are tied to the four pillars of Interim PRS. IFAD’s crisis prevention and recovery policy is reflected in the first two programme assistance (the Eastern Lowlands Wadi Development Project, and Gash Barka Livestock and Agricultural Development Project) which focused on re-establishment of independent livelihoods for crisis-affected (Drought/War) rural households, and tied to IPRS pillar-reinvigoration of economic growth. The PCRRDP approved in December 2006, initiated the process of sustainable agricultural and livestock development through the introduction of productivity enhancing technology, improvement of natural resource management, and capacity building at all levels to support community driven development initiatives. The Programme also, responds to the three remaining pillars of Interim PRS namely: creating income – generating opportunities for the poor; improvement of human resource development; and creating enabling environment and institutional capacity-building.

In order to expand outreach to the target group, IFAD strategy includes collaboration with other development partners including UNDP, GEF, EC, World Bank, AfDB, bilateral donors, the private sector and NGOs. Major partners in the proposed Add-on Programme are: the EC which may cofinance the proposed Programme through its Special Assistance to respond to souring food prices; EC and Italian government supporting up-stream irrigation development; International Centre of Agricultural Research in the Dry Areas (ICARDA) and National Agricultural Research Institute that will provide technical support in technology generation, seed production and processing; UNDP, GEF and Norway which will collaborate in natural resource management; and enhancement of participation of private sector including farmers groups that will engage in seed production, processing, storage and marketing; and agricultural and livestock production. Country Programme Approach. The proposed Add-on Programme will build on the policy, institutional and strategic approach which have been established, tested and found to be working in the ELWDP, GBLADP and PCRRDP. Considerable efforts have been devoted to establishing a
sustainable smallholder agricultural development system which will provide a base for future development thrust for the Fund and other development partners in Eritrea. IFAD has strengthened the
decentralized system of planning, implementing and monitoring/evaluation and complemented it with a coordination arrangement at the national level to ensure operation within a sound national policy
and institutional framework. IFAD’s projects/programmes have been implemented within this framework which other development partners are expected to adopt. The Add-on Programme will assist to initiate a seed production system which other development partners can build-upon to make certified seeds available nationally to smallholders. The system builds on a pilot seed development programme which NARI has been operating in the past 5 years in collaboration with ICARDA, and IFAD’s support to forage and grass seed production under PCRRDP. In addition, an input supply and financing system which has been in operation will be improved through strengthening its policies and strategy base to enhance sustainability.

The activities to be supported will enhance the development objectives of PCRRDP including the raising of smallholder agricultural productivity and production on a sustainable basis, improvement of the effectiveness of basic agricultural support services, and environmental conservation. The drought of 2008 led to the loss of seed stocks by most farmers, and a general reduction of agricultural outputs which was further compounded by the global food shortage. The additional financing will make it possible to provide much needed production inputs that can within a short time permit increased food production to respond to shortage of production and the global food shortage and soaring food prices. The proposed additional financing has attracted interest from other development partners-EU, UNDP, FAO and Oxfarm that have provided input supply using government institutions which have been strengthened by past IFAD assistance. This complimentary assistance is creating the basis for improved policy harmonization and resource use.

Smallholders are responsive to market forces however, their production efforts are constrained by inadequate access to improved inputs particularly water, seeds and fertilizers. Measures which will
address these constraints coupled with positive market signals will complement ongoing development initiatives under PCRRDP, and elicit appropriate supply response from smallholders. This will impact
positively on local food production which will cushion the effects of global food shortage and soaring food prices.

The Goal remains the same with PCRRDP, i.e. to improve food security and contribute to alleviation of rural poverty. The Objective will compliment the PCRRDP objective by ameliorating the impact of global food crisis and soaring food prices through accelerating agricultural and livestock production by improving access by smallholders to yield enhancing inputs –crop water, certified seeds, organic and inorganic fertilizers, and agro-chemicals. The key outputs and impact indicators and results monitoring framework are shown in Annex I.

Programme Area. The Add-on Programme will operate in zoba Debub and zoba Gash Barka which are also the area of operation of PCRRDP. The two zobas border Ethiopia and suffered extensively from the border conflicts of 1998-2000. The area also accommodated the highest number of Internally Displaced People (IDP), expellees, returnees and demobilized soldiers. Resettled households in the project area have been estimated at 30,000. The drought of 2000-2003 further compounded the problems of the population. Most rural households with livestock have to sell their animals to buy food and a good number of the animals also died due to feed and water shortages. The government with the collaboration of development partners has provided support in the last nine years, to reestablish the operation of poor rural households and resuscitate the government institutions for administration and technical support services. Both zobas have high concentration of poor households, problems of land degradation, and high population of woman headed households ranging from 30-40% of the population reflecting the devastating effects of the border conflicts. The Target Group will also be as defined under PCRRDP. The add-on will increase support to them and expand the outreach to poor households particularly to WHHs. The poor rural households will be assisted to improve their income and food security by facilitating their access to additional land in irrigation (spate and small scale irrigation) schemes; providing them opportunities to own livestock; backyard poultry, smallstock, and small dairy units supported by the Programme; enhancement of their technical capability through training and extension services; and facilitating their access to production inputs particularly certified seeds, manure and fertilizers.

The proposed additional financing will expand activities of two components of PCRRDP namely; Agriculture and Livestock Development; and Institution Strengthening.

Agriculture. Additional assistance will include the following: Expansion of Seed Production and Distribution; increasing the area under irrigation- spate and small-scale schemes and improving the efficiency of water use to raise productivity; and provision of fertilizer and agro-chemicals. The seed production will be enhanced through equipping the tissue culture laboratory, and construction of a green house; rehabilitation of two stores for the storing and germination of potato seeds; enhancing the capacity of NARI to produce breeder and foundation seeds; strengthening of APDD to supervise the production of certified seeds through outgrowers; and improvement of seed processing facilities. The Agricultural Divisions of the two participating Zobas will also be strengthened to organize and technically support outgrowers for the production of certified seeds. A seed development committee including representatives of smallholders will be established to provide oversight for the development of a sustainable seed development system. The proposed additional financing will permit the provision of 2,993 tonnes of certified seeds comprising about 2,554 tonnes of grains and pulses, 441 tonnes of seed potato, and 0.747 tonnes of vegetable seeds. In addition 66,000 banana suckers will be distributed. A revolving fund will be established to ensure sustainability post project period. Irrigation Development Assistance will be provided to improve management on 1,250 ha of existing smallscale irrigation schemes, develop about 450 ha of smallscale irrigation, and about 2,000 ha of spate irrigation. About 11,000 ha of rainfed crops will also receive seeds, fertilizers and chemicals. Agricultural input supply for the above development will include the provision of 4,790 tonnes of fertilizers comprising 1,723 tonnes of Urea, 3028 tonnes of DAP, and 39 tonnes of potash; and provision of about 1.5 tonnes of chemical – fungicides and insecticides for use in the production of fruits and vegetable. The main crops to be supported under rainfed and spate irrigation are sorghum, pearl millet, finger millet, wheat, barley and maize. In the smallscale irrigation areas, fruits and vegetables will be supported and include tomatoes, potatoes, pepper, onions, leafy vegetable, banana and citrus.