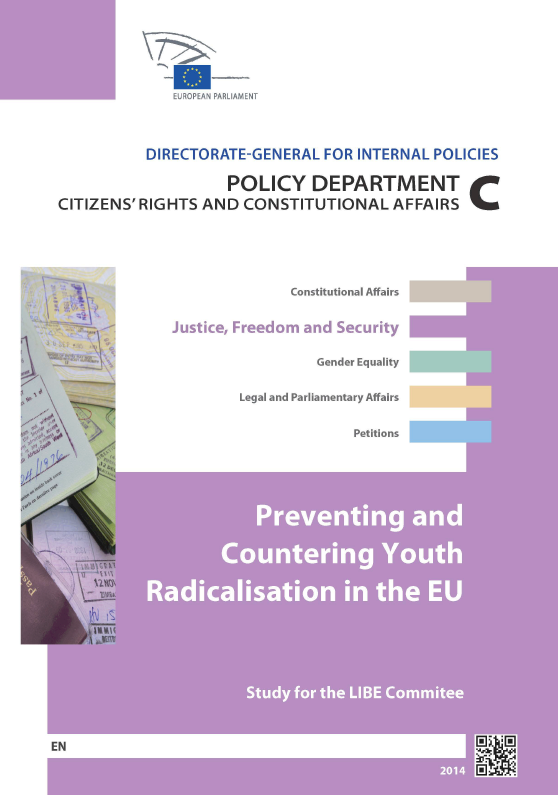 Preventing and countering youth radicalisation in the EU

Upon request by the LIBE Committee, this study focuses on the question of how to best prevent youth radicalisation in the EU. It evaluates counter-radicalisation policies, both in terms of their efficiency and their broader social and political impact. Building on a conception of radicalisation as a process of escalation, it highlights the need to take into account the relation between individuals, groups and state responses. In this light, it forefronts some of the shortcomings of current policies, such as the difficulties of reporting individuals on the grounds of uncertain assessments of danger and the problem of attributing political grievances to ethnic and religious specificities. Finally, the study highlights the ambiguous nature of pro-active administrative practices and exceptional counter-terrorism legislation and their potentially damaging effects in terms of fundamental rights.

The deadly attacks in Madrid (2004), London (2005), Glasgow (2007) and Stockholm (2010), followed by the foiled attempts and arrests in Copenhagen (2010) and Berlin (2011) have contributed to move back the issue of violent extremism and “radicalisation” up on the European political agenda. Furthermore, political concerns about youth radicalisation gained momentum with the publication of alarmist intelligence reports and the multiplication of news reports about European citizens flocking to Syria to fight, mostly alongside the Syrian opposition.

Even though it is difficult to ascertain the number of European citizens who have gone to or are still in Syria since March 2011 (apx. between 400 and 2000), the supposed threat posed by these European fighters has led to the recent EU Commission Declaration of January 2014 calling EUMS to increase their efforts to prevent radicalisation and extremism.

In accordance with the ad hoc briefing paper submitted to the European Parliament in January 2008 entitled Preventing violent radicalisation and terrorist recruitment in the EU – The threat to Europe by radical Islamic terrorist groups, this study is premised on the following points:

This study argues that these precautions are not just academic exercises of style but are key to understand the dynamics at stake and to assess the longer-term results, impact and effects of measures taken to counter radicalisation.

In fact, an exploration of the last decade’s literature suggests that not much innovative and fundamental knowledge have been gained in the field of radicalisation. ‘Radicalisation’ appears to be an unhelpful concept to understand forms of political violence, and simplistic causal links have obscured the fact that radicalisation processes are complex and difficult to anticipate and predict. Thus, a more cautious approach is developed throughout this study.

2.4. The myth of ‘self-radicalisation’, online proselytising and new technological developments

Self-radicalisation, associated with the development of new communication technologies (mainly the Internet and social networks), constitutes the third main area of concerns of European law enforcement agencies and intelligence services. The use of new technologies for recruitment and propaganda is undeniable. However, their impact and their role shouldn’t be overestimated. Subversive or revolutionary movements pre-dated these new technologies, and British, German and French workers have massively joined the fight in Spain during the civil war without Youtube or Facebook. Furthermore, the advent of new media has not, directly and in its own capacities, produced political or social upheavals. Social actors use the communication tools that are available to them – yesterday tracts and newspapers, today Internet, Tweeter, etc. Of course, new information and communication Technologies (ICTs) have changed the ways in which activists communicate, collaborate and demonstrate. However, the critical role given to ICTs in strengthening political and activist engagement should be carefully assessed. Violent action is unlikely to originate from purely virtual ties if they are not sustained by previous face-to-face interaction (Cardon, Granjon, 2010; Neveu, 1999).

Many discourses, coming mainly from political leaders and intelligence services, have highlighted this category of individuals who, alone in front of their computers, decide to take action after surfing on jihadist websites or forums. If this scenario cannot be entirely excluded, it is barely tenable from a sociological perspective. As detailed above, commitment requires a series of social mediations and interactions to exist and to be maintained. The few exceptions to this rule concern what intelligence services themselves designate as “straightjacket cases”, because they involve individuals qualified as ‘mentally ill’. Therefore, the extension of the powers of the police and intelligence services in the name of a rather questionable ‘precautionary principle’, that involves early detection online of individuals “at risk” (see below section 3) and allows for more intrusive control of the Internet, should be questioned.

As developed throughout this section, simplistic causal links have obscured the fact that radicalisation processes are complex and difficult to anticipate and predict. With regard to the situation in Syria, there is far too much sensationalism and few reliable assessments of the risks arising from the ‘returnees’. As argued previously, far from being a purely academic exercise, it is of paramount importance to analyse radicalisation in a more subtle and nuanced way, bringing together an understanding of the social and political context with a clear relational approach of the different mechanisms at stake in the process of radicalisation. Current dominating approaches to radicalisation which, as underlined above, contain major weaknesses and suffer from clear lack of evidence, have informed the policy and tools developed across European member States to counter radicalisation. This aspect is even more worrying that it causes more unwanted and critical side effects than being effective against radicalisation.

Legal prosecution constitutes the central pillar of the prevention of radicalisation and terrorism in Europe. Over the years its powers have been substantially been extended. The shift towards anticipatory prosecution is characterised by an extension of the pre-charge detention period (3.1.1); the growing weight of intelligence in court and the blurring of the distinction between intelligence and evidence (3.1.2); the extension of the scope of terrorist investigations (3.1.3) and the extension of the scope of terrorist arrests (3.1.4). A key element here is to assess whether or not the development of pre-emptive judicial powers have contributed to curtail radicalisation.