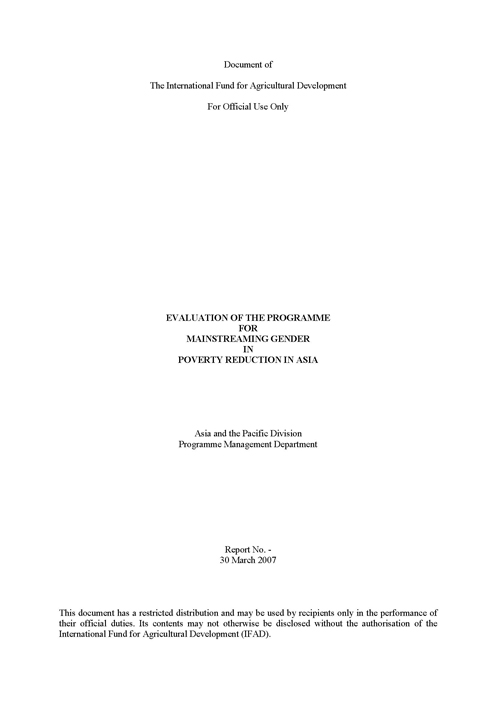 2. The Gender Mainstreaming Programme was implemented in three phases, the first one in 1999-2000, the second one 2000-2002, and the third from 2004-2006. The evaluation focused on the third phase, that was implemented by the UNIFEM South Asia Regional Office (SARO) with a sub-contract to the Asian Institute of Technology in Bangkok for work in Vietnam and Cambodia. The coordinator of the programme remained the same for the three phases.

4. The evaluation of the programme included a series of interviews, documents review and fieldwork by a team of consultants. Staff were consulted in IFAD headquarters, in UNIFEM Delhi office and in AIT and UNOPS Bangkok offices. Fieldwork was carried out in Sri Lanka, Cambodia and China. The evaluation report analyzes the programme results considering its relevance, effectiveness, efficiency and impact on main target groups. Effectiveness is analysed according to three main levels of intervention: policy, learning and operations.

5. The development objective of the GMP, “to enable women to overcome poverty and to increase their role in participatory governance and economic activities”, was relevant and in line with the IFAD Gender Action Plan 2002-2006; with the IFAD Strategic Framework 2002-2006 and with the Regional Strategy 2002-2006.

6. In the third phase the programme took a more policy-oriented direction, with the strategic partnership with UNIFEM. However the design of the programme was weak and did not express this clearly. Objectives, activities and outputs were quite generic. They allowed for practically all possible gender mainstreaming activities in all IFAD operations in Asia, while the resources allocated to this were clearly not commensurate with such objectives.

7. The programme was effective at the policy level. The partnership with UNIFEM and the Programme coordinator’s reputation as a researcher and activist led to her participation in many advocacy and policy events in the region. The GMP also organised its own event in collaboration with IDRC in Delhi, the Regional Conference on Development Effectiveness through Gender Mainstreaming: Lessons Learnt from South Asia. The conference was attended by policy makers, representatives of civil society and academic institutions, heads of international and donor agencies, as well as indigenous women and women peace activists. The GMP joined UNIFEM SARO effort to engender the Poverty Reduction Strategies Papers in Pakistan and Nepal and the Indian 11th Plan in issues like women’s right to land and assets, to mobility and inheritance, to clean energy, and to representation in local and national administrations.

8. The Programme’s inputs to policy dialogue were often inspired by IFAD field experience. Less evident was the return of the information on policy changes to IFAD staff and IFAD projects, which appear on the whole under-informed or completely unaware of these activities of the Programme.

9. Effectiveness with respect to learning has been moderate. During its third phase the GMP produced a large amount of documentation including three books and nine published working papers. Many of the documents produced were of very good quality and in some cases there were invitations for their presentation at major UN international meetings, even outside the region. References to IFAD projects and particularly IFAD success stories are scattered throughout those documents. These annexed to the programme’s progress reports. However, there was no other regular distribution to projects, IFAD field presence officers, UNOPS or IFAD staff. According to interviews at IFAD headquarters, only a small part of the concerned headquarters staff received the documentation. Still less read it or used it. The GMP did create a website to post the materials, but it was more a showcase than an effective tool of communication, particularly with IFAD.

10. The production and distribution to the development and academic community of those quality research documents based on IFAD field experience added to IFAD corporate impact. However, the lack of regular dissemination and feedback to and from field level and partners diminished their relevance and prevented them from realising their full potential for impact.

11. GMP effectiveness at the operations level was different for the UNIFEM and AIT components, because AIT chose to focus mainly on projects, while UNIFEM did not. UNIFEM carried out only one mission for project support to Sri Lanka which was not completely successful. As highlighted in the field case study for the evaluation, the positive impact of the GMP mission was confined to the training dimension, whereas its gender assessment and proposed gender action plan were not approved or adopted by the project management. On the other hand, GMP papers for the Nepal and Bangladesh COSOPs were appreciated by IFAD CPMs.

12. The AIT component was very effective in its work in Cambodia and Vietnam. AIT contributed to the strengthening of capacities of the national women’s agencies, the Ministry of Women’s Affairs in Cambodia and the Women’s Union in Vietnam. It effectively promoted increased collaboration between women’s agencies and agriculture units at all levels. It also helped to develop effective tools for engendering agriculture extension and introducing gender monitoring.

13. Bearing in mind the lack of alignment between objectives and resources, the use of resources by the GMP can be considered to have been relatively efficient. This is evidenced by the number of activities and outputs produced in a relatively short period, with limited staff. However, detailed analysis of efficiency is not possible due to the fact that IFAD grant agreements only require accounting by expenditure category that does not make it possible to distinguish the level of resources used for a given activity or for achieving a given result or objective.

14. The GMP presents some interesting innovations, such as the partnership between IFAD and UNIFEM, that was an effective way to bring issues emerging from IFAD’s field experiences to the attention of governments. At the operational level, work done by AIT in Cambodia and Vietnam also included some innovations, such as collaboration with national women’s unions, an ‘engendered’ agriculture extension system, and new gender monitoring tools. The establishment of three indigenous women’s centres (two in India and one in China), appears to have been a good way of creating decentralised platforms for networking, research and development activities managed by the indigenous women themselves or by committed activists and researchers. The centres, established in the first phases of the programme, continued to receive small amounts and backstopping in the third phase. The evaluation visiting the centre in China found that it has become a local point of reference for gender training and networking amongst researchers in the area.

15. The GMP has had significant impact on some institutions and policies. Its activities contributed to engender national policies, particularly in issues of interest to IFAD such as access of rural women to resources. The programme has also contributed to create and strengthen networks of NGOs which have been effective in policy lobbying. AIT support to governmental and non–governmental institutions in capacity building was effective in creating spaces for dialogue among various stakeholders and it led to effective networking at national and regional levels.

16. However, the GMP has not had significant impact on IFAD staff. There has been scarce involvement of CPMs in the programme activities and limited diffusion of programme documentation.  The evaluation considers the reasons for this limited impact to be the result of three factors: (i) a programme design process where CPMs were not involved in defining objectives or identifying activities; (ii) limited outreach by the Programme that under-valued the importance of this outcome; and (iii) limited responsiveness by CPMs.

17. The probability that GMP impact will be sustained is good where the programme has contributed to changes policies and changes in institutions, even if such impact is indirect it brings with it the potential to affect a large number of beneficiaries. In addition, the probability that GMP impact on direct beneficiaries will be sustained is good – where it occurred. In Cambodia, for
example, beneficiaries reported to the evaluation that domestic violence has been reduced and that there is greater sharing of work and family responsibilities amongst men and women as the result of training designed to increase sensitivity to gender-related issues. On the contrary, the sustainability of programme impact on IFAD as an institution is unlikely due to the fact that the achievements in the GMP third phase have not been sufficiently internalised.

18. On the basis of lessons learned from the evaluation of the GMP, several recommendations can be made. They are found below, grouped by design, policy, learning and operations.