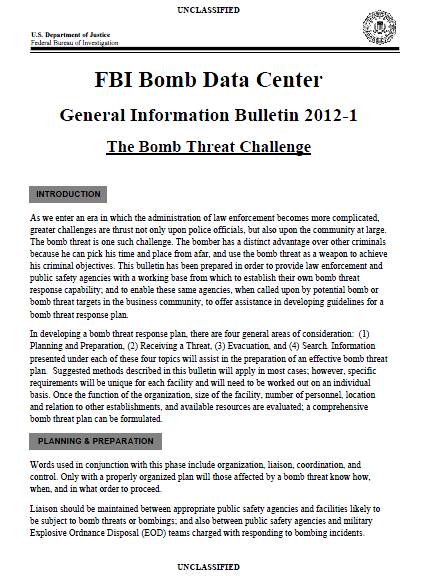 As we enter an era in which the administration of law enforcement becomes more complicated, greater challenges are thrust not only upon police officials, but also upon the community at large. The bomb threat is one such challenge. The bomber has a distinct advantage over other criminals because he can pick his time and place from afar, and use the bomb threat as a weapon to achieve his criminal objectives. This bulletin has been prepared in order to provide law enforcement and public safety agencies with a working base from which to establish their own bomb threat response capability; and to enable these same agencies, when called upon by potential bomb or bomb threat targets in the business community, to offer assistance in developing guidelines for a bomb threat response plan.

In developing a bomb threat response plan, there are four general areas of consideration: (1) Planning and Preparation, (2) Receiving a Threat, (3) Evacuation, and (4) Search. Information presented under each of these four topics will assist in the preparation of an effective bomb threat plan. Suggested methods described in this bulletin will apply in most cases; however, specific requirements will be unique for each facility and will need to be worked out on an individual basis. Once the function of the organization, size of the facility, number of personnel, location and relation to other establishments, and available resources are evaluated; a comprehensive bomb threat plan can be formulated.

Words used in conjunction with this phase include organization, liaison, coordination, and control. Only with a properly organized plan will those affected by a bomb threat know how, when, and in what order to proceed.
Liaison should be maintained between appropriate public safety agencies and facilities likely to be subject to bomb threats or bombings; and also between public safety agencies and military Explosive Ordnance Disposal (EOD) teams charged with responding to bombing incidents.

Through such contact, it will be possible to determine what technical and training services might be needed by potential bomb threat targets. Note that while some public safety agencies may provide considerable aid in bomb threat situations, most public and private facilities must plan and carryout the major portion of the plan, including internal control and decision making. Both liaison and coordination are factors which a bomb threat plan must take into consideration, especially when neighboring establishments or businesses may share the same building. Proper coordination will assure smooth handling of the bomb threat with the least amount of inconvenience to all concerned. Control is especially important during evacuation and search efforts, and effective security will lessen the risk of an actual explosive device ever being planted.

In preparation for the eventuality of a telephone bomb threat, all personnel who handle incoming calls to a potential target facility should be supplied with a bomb threat checklist as shown in Figure 1. When a bomb threat is received, it may be advisable for the person receiving the call to give a prearranged signal. For instance, the signal can be as simple as holding up a red card. This would allow monitoring of the call by more than one person, and it would enable someone else to attempt to record and/or trace the telephone call.

Tape recording the call can reduce the chance or error in recording information provided in the bomb threat. It may serve as evidence valuable to the investigation and assist in evaluating the authenticity of the bomb threat.
Since local jurisdictions may have statutes restricting this sort of recording, the proper officials should be contacted prior to installation and use of such equipment. If a continuous recording setup is not deemed economically practical, a system which could be activated upon receipt of a threat call might be considered feasible. A local telephone company representative can provide information regarding specific services available. Regardless of whether the bomb threat call is to be recorded and/or monitored, the person handling it should remain calm and concentrate on the exact wording of the message, and any other details which could prove valuable in evaluating the threat.

In those instances when a bomb threat has been electronically recorded, voice identification techniques may be employed. While the courts and the scientific community are divided over the reliability of “voice printing” as evidence, it can serve as an investigative tool. Upon request, the FBI will perform audio examinations, for the purpose of investigative leads only, for any law enforcement agency. Departments interested in this service may contact their local FBI Field Office for further assistance.

Although comprising a smaller percentage of bomb threats, the written threat must be evaluated as carefully as one received over the telephone or the Internet. Written bomb threats often provide excellent document-type evidence. Once a written threat is recognized, further handling should be avoided in order to preserve fingerprints, handwriting, typewriting, postmarks, and other markings for appropriate forensic examination. This may be accomplished by immediately placing each item (i.e., threat documents, mail envelope, etc.) in separate protective see through covers, allowing further review of the pertinent information without needless handling. In order to effectively trace such a bomb threat and identify its writer, it is imperative to save all evidentiary items connected with the threat.

Regardless of how the bomb threat is received (e.g., e-mail, telephone, written), the subsequent investigation is potentially an involved and complex one requiring a substantial degree of investigative competency in order to bring the case to a successful conclusion. Cognizant of this, and of the fact that useful evidence regarding the threat seldom proceeds past the bomb threat stage, the efficient accumulation and preservation of evidence cannot be over stressed.

After a bomb threat has been received, the next step is to immediately notify the people responsible for carrying out the bomb threat response plan. During the planning phase, it is important to prepare a list setting forth those individuals and agencies to be notified in the event of a bomb threat. In addition to those people mentioned previously, the police department, fire department, FBI and other Federal public assistance agencies, medical facilities, neighboring businesses, employee union representatives, and local utility companies are among those whose emergency contact information should be included on such a list.

The bomb threat must now be evaluated for its potential authenticity. Factors involved in such an evaluation are formidable, and any subsequent decision is often based on little reliable information. During this decision making process, until proven otherwise, each threat should be treated as though it involved an actual explosive device; even though bomb threats in which an IED is present comprise a small percentage.