The following document was obtained from the website of the Inland Marine Underwriters Association. 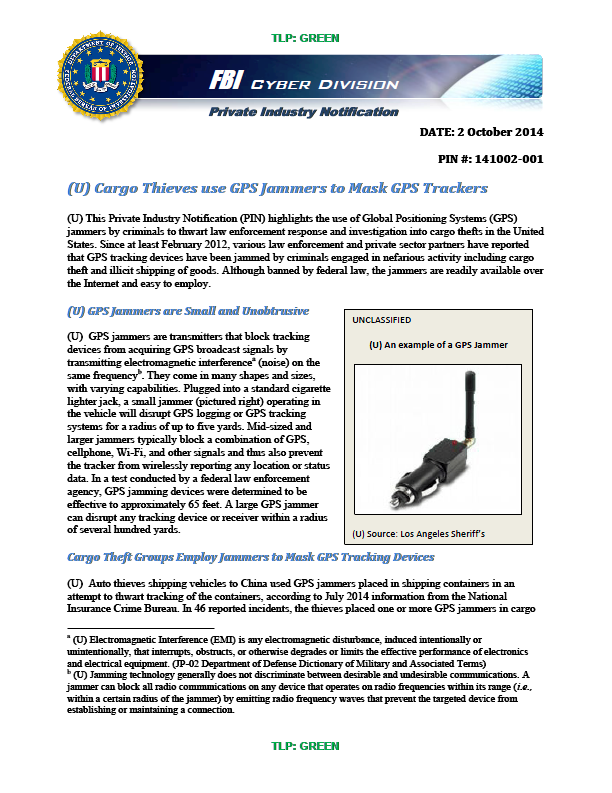 (U) This Private Industry Notification (PIN) highlights the use of Global Positioning Systems (GPS) jammers by criminals to thwart law enforcement response and investigation into cargo thefts in the United States. Since at least February 2012, various law enforcement and private sector partners have reported that GPS tracking devices have been jammed by criminals engaged in nefarious activity including cargo theft and illicit shipping of goods. Although banned by federal law, the jammers are readily available over the Internet and easy to employ.

(U) GPS Jammers are Small and Unobtrusive

(U) GPS jammers are transmitters that block tracking devices from acquiring GPS broadcast signals by transmitting electromagnetic interference (noise) on the same frequency. They come in many shapes and sizes, with varying capabilities. Plugged into a standard cigarette lighter jack, a small jammer (pictured right) operating in the vehicle will disrupt GPS logging or GPS tracking systems for a radius of up to five yards. Mid-sized and larger jammers typically block a combination of GPS, cellphone, Wi-Fi, and other signals and thus also prevent the tracker from wirelessly reporting any location or status data. In a test conducted by a federal law enforcement agency, GPS jamming devices were determined to be effective to approximately 65 feet. A large GPS jammer can disrupt any tracking device or receiver within a radius of several hundred yards.

(U) Auto thieves shipping vehicles to China used GPS jammers placed in shipping containers in an attempt to thwart tracking of the containers, according to July 2014 information from the National Insurance Crime Bureau. In 46 reported incidents, the thieves placed one or more GPS jammers in cargo containers with stolen automobiles. The devices were made in China and could be bought for approximately $14.00 over the internet. The use of the GPS jammers was an apparent attempt by thieves to thwart the tracking of the shipping containers.

(U) Cargo thieves in North Florida used GPS jammers with a stolen refrigerated trailer containing a temperature controlled shipment, according to a July 2014 report from the Pharmaceutical Cargo Security Coalition. In this incident, the hauling tractors were swapped out by the cargo thieves. The Miami based suspects were ultimately stopped and apprehended by the Florida Highway Patrol in mid-Florida on a routine vehicle stop; the shipment was recovered intact. Discovered, hidden inside of the trailer’s refrigerator unit, were portable GPS jamming devices hooked unobtrusively to a battery located inside the unit. The trailer, although not equipped with a visible GPS tracking device, was treated by the thieves as if there were a device on or in the trailer. It is reasonable to believe that the individuals who planted the jammer felt that there may have been a tracking device secreted somewhere inside the shipment and used the GPS jammer to thwart the tracking of the shipment.

(U) Federal law prohibits the marketing, sale, importation, or use of a transmitter (e.g., a jammer) designed to block, jam, or interfere with wireless communications. The Federal Communications Commission (FCC) has issued Enforcement Advisories and has also ordered numerous online retailers to stop selling signal jamming devices. A retailer that receives a second warning could face a fine of up to $16,000 for each day on which a jammer was illegally marketed, up to a maximum of $122,500. The FCC has also issued actions with substantial fines against individuals caught operating these devices within U.S. territory. Jammers, which are sometimes used to avoid cell phone distractions or evade surveillance, could produce “disastrous consequences by precluding the use of cell phones to reach life-saving 9-1-1 services provided by police, ambulance, and fire departments,” according to the FCC. Though a limited exception exists for use by authorized federal agencies, jammers have no lawful consumer use. Accordingly, mere possession of a jammer with intent to violate federal law may subject the device to seizure.