The following intelligence bulletin from the FBI Phoenix Field Office was originally obtained and published by Yahoo News. 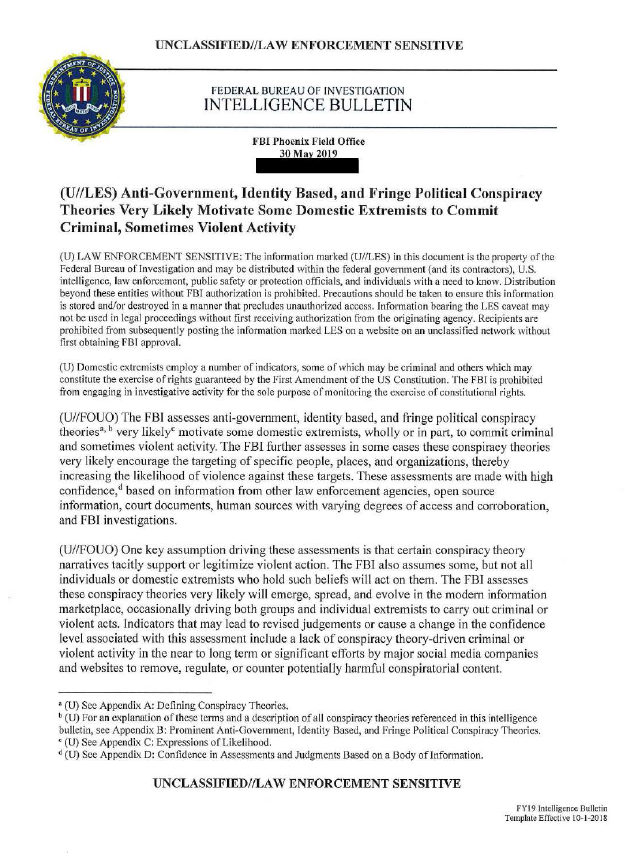 (U//FOUO) The FBI assesses anti-government, identity based, and fringe political conspiracy theories very likely motivate some domestic extremists, wholly or in part, to commit criminal and sometimes violent activity. The FBI further assesses in some cases these conspiracy theories very likely encourage the targeting of specific people, places, and organizations, thereby increasing the likelihood of violence against these targets. These assessments are made with high confidence, based on information from other law enforcement agencies, open source information, court documents, human sources with varying degrees of access and corroboration, and FBI investigations.

(U//FOUO) One key assumption driving these assessments is that certain conspiracy theory narratives tacitly suppo1t or legitimize violent action. The FBI also assumes some, but not all individuals or domestic extremists who hold such beliefs will act on them. The FBI assesses these conspiracy theories very likely will emerge, spread, and evolve in the modem information marketplace, occasionally driving both groups and individual extremists to carry out criminal or violent acts. Indicators that may lead to revised judgements or cause a change in the confidence level associated with this assessment include a lack of conspiracy theory-driven criminal or violent activity in the near to long term or significant efforts by major social media companies and websites to remove, regulate, or counter potentially harmful conspiratorial content.

(U//LES) The FBI assesses anti-government, identity based, and fringe political conspiracy theories very likely motivate some domestic extremists, wholly or in part, to engage in criminal or violent activity. This assessment is based on events in which individuals committed crimes, plotted attacks, or successfully carried out deadly violence and who-either before or after their arrests- attributed their actions to their conspiratorial beliefs. These events include instances in which the perpetrators intended to kill groups identified by such theories as hostile and malevolent, or to simply carry out dangerous, unlawful acts in an effort to draw attention to or expose a perceived conspiracy.

(U//LES) The FBI assesses in some cases anti-government, identity based, and fringe political conspiracy theories very likely encourage the targeting of specific people, places, and organizations, thereby increasing the risk of extremist violence against such targets. This assessment is based on several incidents where individuals threatened, assaulted, or plotted to attack entities they perceived as being linked to or involved with an alleged conspiracy. This targeting occurs when promoters of conspiracy theories, claiming to act as “researchers” or “investigators”, single out people, businesses, or groups which they falsely accuse of being involved in the imagined scheme. These targets are then subjected to harassment campaigns and threats by supporters of the theory, and become vulnerable to violence or other dangerous acts.

(U//FOUO) The FBI assesses anti-government, identity based, and fringe political conspiracy theories very likely will emerge, spread, and evolve in the modern information marketplace over the near term, fostering anti-government sentiment, promoting racial and religious prejudice, increasing political tensions, and occasionally driving both groups and individuals to commit criminal or violent acts. Because some conspiracy theories are highly partisan in nature, political developments, including those surrounding major election cycles such as the 2020 presidential election, likely will impact the direction of these conspiracy theories and the potential activities of extremists who subscribe to them over the long term. Another factor driving the intensity of conspiracy theorizing in the United States, and the subsequent threat from conspiracy-minded extremists, is the uncovering of real conspiracies or cover-ups involving illegal, harmful, or unconstitutional activities by government officials or leading political figures. Indicators that these scenarios are emerging include disrupted plots or successful attacks against popular conspiracy theory targets, such as government facilities, synagogues, mosques, or partisan political figures. Additionally, reports of a sudden rise in threats and unfounded accusations against a given individual or business may indicate impending conspiracy theory-driven crime or violence.

(U) Appendix B: Prominent Anti-Government, Identity Based, and Fringe Political Conspiracy Theories

(U) The conspiracy theories referenced in this intelligence bulletin have been categorized as antigovernment, identity based, or fringe political because they assert secretive, malevolent acts either by an allegedly hostile and tyrannical federal government, by racial, religious, or social minority groups, or by political opponents.

(U) UN: The UN is being used by an evil global cabal to erode American sovereignty, strip away individual liberties, and bring foreign troops to American soil in order to replace democracy with global tyranny.

(U) False Flags: The official story surrounding a given terrorist attack or mass shooting is a lie; the event was staged or conducted by the government to justify encroachments on civil liberties.

(U) Zionist Occupied Government: Jewish agents secretly control the governments of Western states and are conspiring to achieve world domination.

(U) Islamberg: The small Muslim community near Hancock, New York known as Islamberg is a terrorist training camp; its residents, who pose as peaceful Muslims, are in fact Islamic radicals operating as a terrorist sleeper cell.

(U) Pizzagate: High ranking democratic officials are or were involved in a child sex trafficking ring centered at the Comet Ping Pong pizza restaurant in Washington, DC.