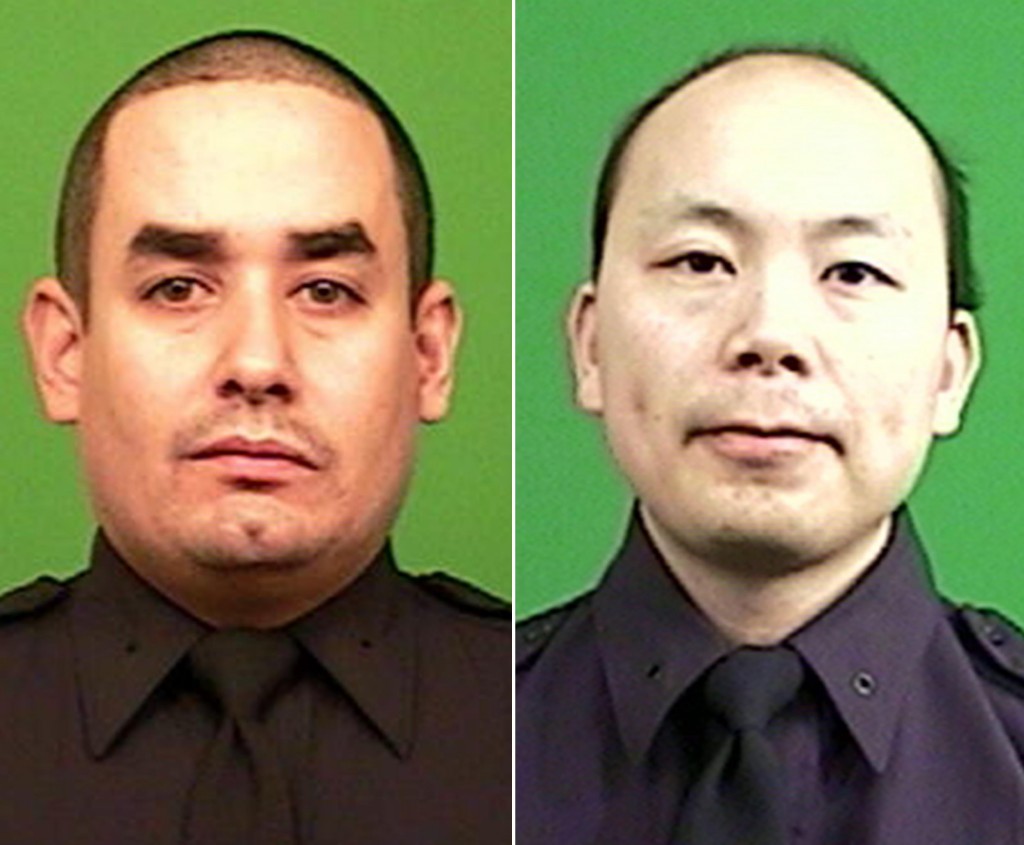 Photos of NYPD officers Rafael Ramos and Wenjian Liu who were murdered on December 20, 2014 by Ismaaiyl Brinsley in apparent retaliation for the deaths of Michael Brown and Eric Garner.

The FBI has issued a National Situational Information Report (NSIR) to law enforcement around the country warning of “copy cat assassinations” following the murder of two New York Police Department (NYPD) officers in December. The report, which was issued days before Christmas and posted online by a lodge of the Chicago Fraternal Order of Police, states that the “recent murders of New York City Police Officers Wenjian Liu and Rafael Ramos have spawned numerous threats” against law enforcement personnel. The report states that Ismaaiyl Brinsley, the man who reportedly shot the two NYPD officers, claimed to be part of a nationwide group planning to kill police officers:

“As of November 2014, USPER Ismaaiyl Brinsley, responsible for the shooting of two New York City Police officers on 20 December 2014, claimed to be a member of an unidentified group that was “going to get a lot of cops in Florida, Las Vegas, and California for New Year’s.” Ismaaiyl Brinsley also discussed travel plans via Amtrak with two other individuals known as “Larry” and FNU LNU (NFI) [First Name Unknown Last Name Unknown (No Further Information)].”

Brinsley, who was initially identified in the media as a member of the national prison gang the Black Guerrilla Family, was later said to have no connection to the gang. However, the day before the murders were committed, the Baltimore FBI office issued a bulletin stating that they had received “reliable information” that members of the gang were planning to target white law enforcement officers to “send a message.” The FBI NSIR mentions this as well as information that indicates the “Heartless Felons Gang, an Ohio street gang, gave its members orders to kill white police officers in the Cleveland area to avenge black lives taken by white police officers.”

Several online threats against law enforcement are also documented in the FBI NSIR including statements made by a man on the East Orange New Jersey Police Department’s Google plus page that he wanted to kill law enforcement officers. The Department of Homeland Security questioned another man at his home in Memphis, Tennessee after he posted online that he was “heading to New York City to kill two more police officers.” The man allegedly wrote “Good Job #F-K12 Kill em all i’m on my way to NY now #shootthepolice 2 more going down tomorrow.” No charges were ultimately filed as the man stated he was intoxicated when he wrote the post.

The FBI NSIR also includes a YouTube comment made by a man later identified as Jeremiah Perez of Colorado Springs:

“SINCE DARREN WILSON our group has killed 6 retired sheriffs and cops……because of this event we will hunt two more in colorado this week…..for every innocent citizen that cops kill WE, VETERANS WILL KILL RETIRED HELPLESS COPS……..we already started and MORE TO COME NOW…….join us and kill any cop or any retired cop !!!!!!! MORE PEOPLE HAVE BEEN KILLED SINCE THE PROTEST !!! THEY DONT CARE, SO NOW REAL HEROS WILL HUNT THEM ALL !!! fuck ISIS, COPS ARE THE REAL ENEMIES OF FREEDOM LOVING AMERICANS and TIME TO STRIKE BACK IN ALL OUT WAR IS NOW !!”

The comment ultimately led to the man’s arrest on federal charges under 18 USC §875, using interstate communications to convey threats of injury against an individual. A criminal complaint written against Perez and posted on the Department of Justice’s website states that the FBI was alerted to Perez’s comment after Google voluntarily notified law enforcement because of the comment’s threatening content. The complaint includes the entire notice provided to the FBI by Google, which states that “based on the content of a post/comment to a YouTube video on Google Plus Social Media, Google Inc. believes that there presently exists an emergency involving imminent death or serious bodily injury to a person or persons, and that immediate disclosure to you of certain information is required to avert the emergency.” After obtaining a search warrant based on the IP address provided by Google, the FBI seized Perez’s computer and interviewed him. He admitted posting the comments and stated that his comments “were the result of misplaced frustration and a way of experimenting with words.”

Forensic examination conducted by the FBI of Perez’s computer revealed a number of other posts to YouTube and other websites using the screen name “Vets Hunting Cops,” including searches that were conducted for the following terms:

Perez reportedly admitted to FBI agents that he had conducted the searches, but said that he had no intention of following through with the actions he was researching. Perez now faces up to five years in prison.